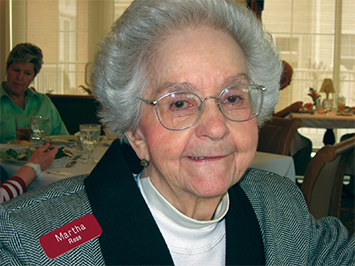 Pioneering oral historian and legendary teacher Martha Jackson Ross died April 5, 2013, in Fremont, Ohio. Ross arrived relatively late in life to the field of oral history. A native of Selma, Alabama, she graduated in 1945 from Montevallo College for Women (now Montevallo University) with degrees in history and English. Later, during the final day of the famous 1965 Selma-­to-­Montgomery civil rights march, she showed courage and commitment by carrying a handmade sign that read, “Here’s One Native Selmian for Freedom and Justice.”

After graduation, she went to work at what would become known as the Oak Ridge National Laboratory, where she met her future husband, Donald. It was only in 1969, after her sixth child went off to school, that Ross entered a pioneering program at George Washington University called “Developing New Horizons for Women,” designed for women who had left the workforce or who wanted to change professions.

Inspired by a newspaper article on the interviews with former slaves conducted by the Federal Writers Project in the 1930s, Ross wrote a paper for the course entitled, “Oral History: Tomorrow’s Occupation Today.” She then was asked to undertake an oral history project of her own on the Developing New Horizons program. She began teaching a non-­credit course in oral history at George Washington in January 1971, which featured guest appearances by leading figures in the field. Seeking additional graduate study, Ross took a historiography course at the University of Maryland, College Park, with department chair Walter Rundell, who invited her to teach a for-­credit course in oral history.

Ross taught her renowned oral history seminar at the University of Maryland from 1972–­87. She had a great influence on numerous graduate students, many of whom went on to be leaders in the field themselves. One of these students was Linda Shopes, who took Ross’s course in 1974, and went on to serve as president of the Oral History Association and as coeditor of Oral History and Public Memories. “She taught me principles that have held me in good stead throughout my career,” Shopes recalled of her time with Ross, “and opened up networks and professional associations that in many ways made that career possible.” In addition to her teaching, Ross conducted numerous oral history projects, primarily in the Washington, DC area, including one for the Federal Mediation and Conciliation Service and for the National Park Service.

Networking constituted a big part of Ross’s professional contributions. From the start of her tenure at George Washington University, she organized events for the university’s emergent but scattered oral history community to come together. In 1976, Ross cofounded OHMAR (Oral History in the Mid-­Atlantic Region), and in 1982 won OHMAR’s Forrest C. Pogue Award for “distinguished, unique and continuing contributions to oral history.”

Ross also played an increasingly active professional role at the national level. Her articles and scholarly presentations on the ethical dimensions of oral history in particular garnered a deserved reputation for their conscientiousness and depth of reflection. In 1979, as one of the leaders of the Oral History Association, she travelled to the Wingspread Conference Center in Racine, Wisconsin, to help draft what would become the OHA’s first Evaluation Guidelines, setting standards for best practices in the field. In 1984–­85 she served as OHA president, presiding with great aplomb over the memorable annual meeting in Pensacola, Florida, that coincided with Hurricane Juan.

In 2001, the Oral History Association honored her contributions to the field by establishing the Martha Ross Teaching Award. In 2007, the University of Maryland, Baltimore County, created the Martha Ross Center for Oral History. In so doing, the center celebrated Ross as “an educator who taught countless individuals the highest standards of oral history research . . . The name Martha Ross represents the past, the present and the future of oral history.”