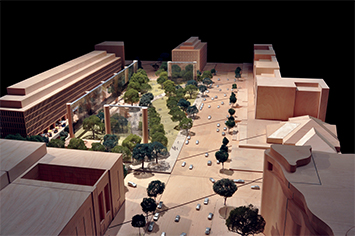 The design of public art in Washington, DC, is shaped by a long, often opaque process of committee approvals, public meetings, and federal and local oversight that is rarely noticed by the public. It is only when some part of that process catches the notice of the press, or some controversy erupts, that the general public becomes more aware of how we make decisions about what does and does not get built. And while it is common for the design of memorials in particular to ignite some kind controversy, the development of the memorial for our 34th president, Dwight D. Eisenhower, is notable for the way in which conflicts in the public process have become more public in the Internet age.

The Department of Defense Appropriations Act of 2000 established the Eisenhower Memorial Commission (EMC) to "consider and formulate plans for such a permanent memorial to Dwight D. Eisenhower, including its nature, design, construction, and location." The commission was made up primarily of members of Congress but also included David Eisenhower, the grandson of the former president.

For the next ten years, the commission raised funds, worked with local and federal agencies to select a site, and oversaw the design selection process. The chosen site, at the base of Capitol Hill, at the intersection of Maryland and Independence Avenues, was chosen in part for its proximity to several existing buildings with strong associations with Eisenhower. The National Capital Planning Commission (NCPC), the federal government's planning agency for DC, met and approved the site selection in August 2006, noting the "specific thematic relationships between Eisenhower's legacy and the federal entities and museums that surround the proposed site, including the Department of Education, the Department of Health and Human Services, the Department of Transportation and the Federal Aviation Administration, the Voice of America, and the National Air and Space Museum."1 These architectural relationships, and their connection to the memorial, would continue to be important factors in the design development.

After the architect, Frank Gehry, was chosen by the EMC and the General Services Administration, the committee saw the project through the various stages and revisions of conceptual design from 2010 through early 2012. The initial memorial design was to balance evocations of Eisenhower as president with that of Eisenhower as Supreme Allied Commander, and included a series of sculptural panels depicting signal moments in his career.

In the most recent design iterations, one panel will depict the signing of the Civil Rights Act of 1957, another will show the D-­day invasion at Normandy, while other elements are intended to interpret his boyhood in Abilene, Kansas. The site will also include quotes chosen from Eisenhower's significant speeches and writings. The memorial core is within a rectangular urban park that would be framed by monumental columns and mesh screens, or "tapestries," depicting the landscape of Eisenhower's boyhood.

The NCPC was positive about many of the main design elements after a January 2011 review in which the main design elements were introduced but not fully developed. In their report, the NCPC stated that "the use of tapestry composed of stainless steel to commemorate President Eisenhower's life and accomplishments is an exciting idea that utilizes a traditional method of storytelling in a modern way." The NCPC took the design team to task for failing to work closely with the DC State Historic Preservation Office or follow Section 106 procedures, which require federal buildings to assess their impact on local historic resources. Nonetheless, they stated, "Assuming the desired resolution can be reached, the contrast between the landscape imagery of the tapestry and the actual landscape of the Memorial will create a unique urban experience."2

In December of that same year, David Eisenhower resigned from the EMC and within several months there was an increasingly vocal and public opposition from both the Eisenhower family and other quarters. In March 2012, a non­profit organization, the National Civic Art Society ("For Beauty and Grandeur in the World We Build") released a report on the Gehry design written by Justin Shubow, the president and chair. The NCAS states that its mission is to "continue to seek the restoration of the classical tradition to its rightful primacy in our nation's capital, while promoting design that dignifies, rather than degrades, the various realms of human endeavor in city and suburb." Among the many targets of their criticism in their report was the modernist Gehry design and the process by which the architect was selected. Many of Shubow's more colorful quotes about Gehry's design were picked up by the press, and the story gathered momentum over the next year.

In the spring of 2013, the process became more complicated for the EMC and the memorial project when their funds came up for reappropriation. The Dwight D. Eisenhower Memorial Completion Act, introduced in March by Robert Bishop (R-­UT), proposed to defund and disband the commission and called for a new memorial selection and design process. At a hearing held in March, testimony was heard from Susan Eisenhower, granddaughter of the former president, and NCAS's Justin Shubow among others. Shubow's colorful testimony in particular received a good deal of play in the press. Shubow castigated the process and the architect: "The result of the poorly run, undemocratic Eisenhower Memorial competition was the bizarre choice of Frank Gehry, an architect known for his deconstructionist style, project-­cost overruns, and prior design flaws."

In June 2013, Interior Secretary Ken Salazar announced that he would review the process and the design, and he met privately with the family to discuss their concerns. Despite these public controversies, the design approval process continued; the Eisenhower Memorial Commission met on June 19 and unanimously approved the conceptual site design. The revised plan, which included more sculptural elements and changes to the existing Eisenhower statuary, was then cleared to go to the US Commission of Fine Arts (CFA), a presidentially appointed commission that advises on architectural and artistic matters.

The CFA voted to approve the major elements of the plan on July 18, with a dissenting vote from commission member Elizabeth K. Meyer, who claimed, in an open letter to the University of Virginia School of Architecture, that the "team's failure-­to-­date to design the public landscape within which the memorial is to be sited was a problem," and "no one would expect us to approve the concept for a building with such fuzzy ideas."

While the Eisenhower Memorial design team is slated to present the most recent design to the NCPC in a fall meeting, there may be more obstacles ahead. President Obama's recent appointment of Bruce Cole, a former chair of the National Endowment for the Humanities and an outspoken critic of the project, to the Eisenhower Memorial Committee may have an effect. Cole was recently quoted in the Washington Examiner calling the design "a cross between an amusement park and a golf course, which thumbs its nose at the neo-­classical style of the great presidential monuments to Washington, Jefferson and Lincoln." Cole's appointment was followed in October by the appointment of Frank Ferhrenkopf, former chairman of the Republican National Committee, as co-­chair. According to Roll Call, Fahrenkopf referred to the memorial's design as "brilliant."3

The Eisenhower Memorial is scheduled to open in 2017.

—Jennifer Reut is former associate editor of Perspectives on History.