From Reggae to "Education for a Change!"

Eighth International Seminar on Decolonization member Birte Timm's love of reggae led her first to a dissertation topic and then to cofounding a nonprofit educational organization aimed at enriching the lives of some of Jamaica's least-privileged citizens.

The German-born Timm, 35, Marie Curie Fellow of the Gerda Henkel Foundation at the University of the West Indies, Mona, Jamaica (UWI), said music attracted her to the Caribbean island nation that won its independence from the British Empire in 1962. "I fell in love with reggae, went to many concerts in Germany, fell in love with the culture, and wanted to know more about the country that produces such great music," she explained.

While studying for her undergraduate examinations at the University of Hamburg, she discovered the Jamaica Progressive League, one of the first groups to demand self-government for the island. The league became the focus of her doctoral work at the Free University of Berlin. She made her first trip to Jamaica in 2005, followed by several lengthy visits. She continued her research as a visiting fellow at UWI in 2007–2008, completing her dissertation, "The Transnational Roots of Anti-Colonial Nationalism in Jamaica: The Jamaica Progressive League in New York and Kingston, 1936–1962," in 2012.

Her time in Jamaica allowed her to add a chapter to the historiography of Caribbean independence struggles and gave her a window into the situation facing residents of troubled areas of the capital, Kingston. "I got a deep insight into the problems of the country and was especially concerned about the children and youths growing up in the so-called 'ghettos.' Their talents and enthusiasm motivated me to embark on a mission to develop projects providing free access to educational opportunities, information technology, and homework assistance, as well as facilitating creative and cultural expressions." 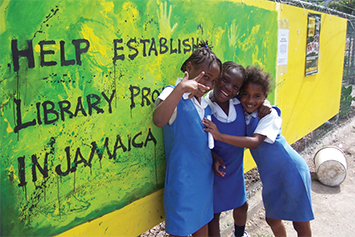 In 2008, she teamed up with reggae DJ and entrepreneur Hilmar Keding and organized a group of friends to found HELP Jamaica!, an NGO aimed at addressing the issues she had observed. "HELP," an acronym for "Help Establish Library Projects," has the motto "Education for a Change!" Initially registered in Germany, it became truly transnational in 2009 when it was also registered in Jamaica.Working with residents of Cassava Piece, a Kingston community of 2,000 people known for its poverty as well as its internal political divisions and gang wars, Help Jamaica!'s board and volunteers began to plan for an education center that would meet the needs of children and adults living within the neighborhood. Through donations raised in Germany and Jamaica and a generous grant from the German Embassy in Kingston, they were able to lease and renovate a derelict building that had been devastated by Hurricane Gilbert in 1988. The center opened in 2011.

Currently serving 80–100 children ages 5–15 a day; it is open Tuesday through Saturday from 10 a.m. to 8 p.m. Its evening adult education classes attract 60–100 adults a night, mainly ranging in age from 18 to 40. Peak usage is in the afternoon when children get out of school, Timm said. Besides classrooms, the center has a library, a computer center with 15 desktops, wireless Internet, and an outside "garden" for football and other games. It is staffed by a group of about 12 volunteers: school teachers, social workers, early childhood education specialists, and members of the community. They receive a small stipend. The center has two paid staff members, a professional manager and a part-time teacher who runs its homework program. International volunteers help out, sometimes serving for weeks or months.

"HELP Jamaica! shows that change is possible on a small scale. It started from a vision in my head, and with the support of many other volunteers, the vision became a reality!" Timm said. "The children who attend regularly have tremendously improved in their school performance. And their social skills and conflict resolution are getting better."

After returning from the Decolonization Seminar in August, Timm coordinated a three-day workshop at the center, attended by about 20 children ages 7–14. They studied Jamaican history from slavery through independence, concentrating on the "National Heroes of Jamaica," a focus of her seminar project. "It feels great to not only do research and contribute to our knowledge, but also to integrate that knowledge and be involved in practical efforts to improve the lives of people in a very real and direct way," she said.