Deanna Forsman is a history professor at North Hennepin Community College. She lives in Maple Grove, Minnesota, and has been a member of the AHA since 2000. 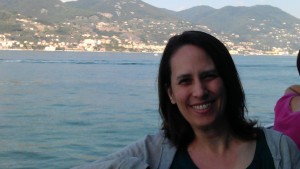 Current school or alma mater/s: I graduated from UCLA with a PhD in medieval European history in 2002; I am currently employed as full-time faculty at North Hennepin Community College.

Informally, I’ve always been fascinated by the past, and my preferred reading list as a child included biographies of historical figures—particularly women pioneers like Dorothea Dix or Elizabeth Blackwell—and historical fiction. Aside from my personal reading habits, my formal exposure to history was more in the nature of what I would now call “chronography”: memorize this name and date so that you can select the right bubble on the multiple choice test. It wasn’t until college that I was exposed to history as something more than names and dates, and I found myself eagerly throwing all my effort and energy into my history classes. I learned to love the ambiguity of history, the puzzle-making aspect of dealing with disparate primary sources, and the stories left to us by the people of the past.

My primary research project focuses on identity in early medieval northwestern Europe. I am specifically interested in how individuals leveraged different identities and the situations under which these strategies failed. A lot of work has been done on “barbarian” ethnicity versus “Roman” ethnicity in late antiquity, and increasingly, we have come to recognize that traditional markers (culture, personal name, tribal affiliation, etc.) cannot be used with any reliability. More recently, scholars have started to think about identity as complex, malleable, and situationally constructed. Within this context, I have become very interested in the situations that lead someone to identify someone else as “not us.” As an example, the fifth-century Gallic bishop Faustus of Riez is generally identified has having a British origin, largely because of a single phrase in a contemporary letter. However, there is nothing in Faustus’s writings that indicate he saw himself as an outsider in Southern Gaul. I am less interested in whether or not Faustus was actually British, and far more interested in the fact that Faustus was identified with the British at a point of theological conflict.

My other major project is ongoing and related to my teaching. We offer a two-year degree in history, and I teach our research methods class. The students’ primary task in this class is to use our college archives to research a topic related to the history of the college. Prior to this past year, the college did not have an official archivist, and so our archives are in a massive state of disarray. In addition to mentoring students through the research process, I am also in the process of cataloguing and organizing our materials. (The pile of materials seems to grow ever larger any time someone retires or simply decides to clean their office!) It is incredibly rewarding to watch the students go through our archives and develop their topics, linking the history of our campus with larger historical trends in the United States and the world.

If anything, my interests have become more eclectic. Being a generalist is an asset for a community college faculty, and as I was asked to prep classes outside of my field of expertise, I found myself reading far more widely and deeply than I ever had in grad school. My shelf has accumulated books on the ancient Hittites, translations of the Shang oracle bones, essays on the Euro as a currency, cultural studies of foot binding in China, and the use of the medieval in modern film.

Geographically and chronologically, my research interests remain focused on the third through seventh centuries in Britain/Anglo-Saxon England and Gaul/Merovingian kingdoms. My dissertation focused on the individuals who moved between Britain and Gaul and the mechanisms that allowed them to do so. Now, I find myself less interested in trying to figure out if Britons were in Southern Gaul or why the Irish entered the Merovingian kingdoms, and more interested in how the idea of “foreigner” functioned within communities. In many ways, my interests parallel our modern shift away from the paradigm of nationalism towards globalization. Nationalism emphasized the idea of distinct and separate identities, whereas globalization emphasizes migration, interconnections, and multiple identities.

My favorite blog, hands down, is Ask the Past (http://askthepast.blogspot.com/). I would highly recommend Cinderella’s Sisters: A Revisionist History of Footbinding by Dorothy Ko (Univ. of California Press, 2005). As the title states, Ko attempted to understand the rise and fall of footbinding as a cultural phenomenon, rather than condemning the practice from the outset. I found it to be a compelling study of gender in China between the 9th and 20th centuries. In addition, it also situates the waning practice of footbinding within the context of China’s encounters with Europe in the late 19th century.

Anyone who is facing pressure to retain students at their institution should take a look at Academically Adrift by Arum & Roksa (Univ. of Chicago Press, 2011). Based on their initial study, the authors argue that students have the highest gains in critical thinking abilities when they take classes that assigned at least 40 pages of reading a week and at least 20 pages of writing over the course of the semester. They also argue that strategies that have positive correlations with retention have negative correlations with learning.

I value the flexibility of the profession. As a discipline, history challenges us to understand the past on its own terms, while encouraging us to develop our own questions about the past. It requires great attention to detail on a micro level while encouraging macro-level thinking to see patterns among our sources. History also covers the totality of the written human experience, from our politics to our ideas, from our hierarchies to our forms of entertainment: all are fair game for historians to study.

I initially joined because I was told that all graduate students about to go on the job market should be members of the AHA. While this is certainly true, the benefits of membership go far beyond the job ads listed in Perspectives. I value the geographic and chronological breadth the articles published in the AHR, which I rely upon to keep my classes fresh. I value the reports on the profession that are provided in Perspectives. I also value the services the AHA provides, from the website to advocacy. These are the reasons I encourage my students to join the AHA if they are serious about being historians.

At one of the AHA meetings, there was a session about Western passion for Japanese culture, and it examined 19th-century Japonisme in comparison with 20th-century Western otaku culture. It was during this session that I realized that historians can seriously and critically study nearly anything related to humans, even something considered to be very fringe pop culture.

Like most faculty at a community college, I am passionate about teaching and improving the perception of teachers in general in our country. I also believe that everyone should have hobbies outside of their professions; my current hobby of choice is ballroom dancing with my husband.

It is said that people who do not know their history are doomed to repeat it. I don’t subscribe to this particular view. I think of history as the memory of the human species: it tells us who we are and how we got here. Just as an individual would have no sense of self without the ability to create and recall memories, we depend upon history for our human identity.