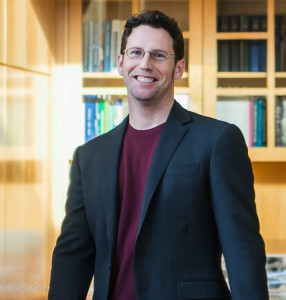 Christopher McKnight Nichols is assistant professor of history, School of History, Philosophy and Religion at Oregon State University. He currently lives in Corvallis, Oregon, and has been a member of the AHA since 2001.

Fields of interest: US role in and relationship to the world, intellectual and cultural history, Gilded Age and Progressive Era, ideology and diplomacy, religion and secularization

I first felt the visceral and intellectual appeal of understanding the past in the fourth grade when my class was studying the ancient Near East. I was transfixed by the design and uses of ziggurats and by the photocopies of cuneiform inscriptions that our wonderful teacher Carol Brighton provided. I actually decided that I wanted to be a historian in high school thanks to another teacher, Dr. Maxine McClintock, whose curiosity and rigorous approach to history ignited my passion for US and world history. She even helped me to apply for an NEH summer grant so that I was exposed to archival research early. My story is, I think, a demonstration of how much good teaching matters. I aspire to have the sorts of impacts with my own teaching that these formative teachers had on my intellectual development. That said, teaching history successfully is, in my view, not about creating more historians per se but, rather, about making the complexities and details of the past—and related modes of understanding via critical reasoning and argument—interesting and important. In turn, I firmly believe that such efforts help history students develop lifelong interests in knowing, understanding, and responsibly applying historical insights, as well as skills such as close (con)textual analysis and cogent writing. Ultimately I am hopeful that such efforts generate not just better thinkers and greater comprehension, but also more engaged and informed citizens.

I recently published my book Promise and Peril: America at the Dawn of a Global Age (Harvard Univ. Press, 2011). The book explains the origins of modern American isolationism and tracks its development alongside innovative visions of internationalism and new perspectives on domestic reform from the 1880s through the 1930s. I served as senior editor of the just-released Oxford Encyclopedia of American Military and Diplomatic History (Oxford Univ. Press, 2013).

Building on this and other previous research, I have embarked on a project entitled Republican Revival, which focuses on the intersection of ideas, politics, and foreign relations in the election of 1952 in order to explain the little-known but deeply significant role played by conservative isolationism and non-interventionism in the early Cold War. I also am continuing to pursue my abiding interest in the Gilded Age and Progressive Era and have just begun work with Nancy Unger co-editing and co-authoring portions of the new Wiley-Blackwell Companion to the Gilded Age and Progressive Era: The Making of Modern America.

I suppose my interests have not changed so much as the intellectual path in view has widened. New challenges and opportunities, new colleagues, new courses, new research topics, along with the freedoms of no longer being a student have helped. Insights stemming from my dissertation and from other projects have pushed me to expand my thinking chronologically, thematically, and in terms of audience. The development of my research helped me to recognize the relevance to contemporary concerns of the historical debates over the “proper” US role in the world—and hotly contested issues about isolation, intervention, and the limits of US power—which I have studied so intensively; this, in turn, has prompted me to do some public historical work in the form of op-eds, talks to non-academic audiences, and radio and televised interviews and panels. I found that this outreach, while not always easy, has been energizing. It has not changed my interests but has broadened as I have tried to clarify some of the ways in which my work in the archives on scholarly books and articles productively contributes to my efforts in the classroom and beyond.

One favorite recent book that I am teaching this term is Eliga Gould’s Among the Powers of the Earth (Harvard Univ. Press, 2012), which is a superb study of the Revolutionary War and early Republic era in global context and as an international transformation “of the first importance.” I find Gould’s analysis of “treaty-worthiness” within the international legal system of the era to be an illuminating way of understanding US-world relations in the 18th and into the 19th centuries and also in the 20th century. The book—and its key organizing concept—work very well in the classroom.

As far as blogs, one of the sharpest and most compelling ones that I read regularly, and which deals with historical research, the profession, academia, and contemporary politics is Tenured Radical, written by Claire Potter of the New School for the Chronicle of Higher Education.

Another blog that I prize is the collective blog of the Society for US Intellectual History. It is frequently refreshed with new book reviews, keen insights on current politics, thoughtful historical analyses, and contemplative essays on pedagogy as well as developments in academia.

The S-USIH organization also is exceptional. The annual conference brings together many influential and emerging intellectual historians and those whose work substantially examines the history of ideas. The 2013 conference had a terrific slate of panels (full disclosure: I was on the program committee) including keynote and plenary panels on hot and emerging historical and historiographical issues of great relevance. I highly recommend the conference.

Ultimately, I suppose that I most value the shared nature of historical inquiry. Ours is, it seems to me, only a superficially solitary endeavor given the collective and dialogic elements of presentations, panels, and discussions, of working with archivists, editors, reviewers, and contributors, and of all the many ways in which colleagues, advisors, and students all collaborate (or should) to make our professional lives more fruitful. This inherently communal aspect of historical scholarship undergirds our collective project as historians and enhances the power and significance of our results.

I recall the interviews and the stress, of course, but who doesn’t? The AHA is far better when you are not interviewing or being interviewed. Still, one of my fondest memories was from one of my first trips to the AHA. In trying to put together my first AHA panel—for 2006 in Philadelphia—I was pleased (actually shocked) by how receptive so many historians who I greatly admired were to my e-mail inquiries. The panel was scheduled for a time I assumed was inopportune and I had little hope of a good turnout; again, much to my surprise a large audience appeared, the comments by impressive senior scholars on the work of three grad students were thoughtful and constructively critical, and there was an intense discussion. It is not always the case that panels go so well, of course, but that initial foray has been more the norm than the exception in my experience. When not interviewing, go to a panel—they can be great!

I closely follow US and global political events, especially related to foreign relations. I am deeply committed to informed political discourse whenever and wherever possible and to bringing historical scholarship and insights to a wide public audience.

I also am deeply committed to mentoring diverse student and community populations and to issues of economic and racial justice. During my time in Charlottesville, I helped University of Virginia history professor Brian Balogh co-found and direct an organization named “Practice Partners.” The program, now run out of UVa’s Madison House for Community Service, combines little league baseball coaching with mentoring and tutoring to generate a holistic approach to support the maturation of local underprivileged children from various backgrounds. At Oregon State I have continued these commitments. I am involved with the Office of Equity and Inclusion and serve as a mentor and faculty sponsor in OSU’s terrific PROMISE Program.

No less intense, though of less importance, is my passion for baseball, particularly the New York Mets. I play baseball and softball whenever I get the chance. I also am a co-founder and longtime participant in one of the most intense “keeper” fantasy baseball leagues around (ask me about it at a conference sometime!).