Tomorrow, many of my students will participate in what may be the largest single instance of high school activism in a generation. At 10 a.m. on March 14 they will participate in the #ENOUGH National School Walkout to protest Congress’s lack of action on gun violence. My class is currently in the midst of a unit on the Long Civil Rights Movement. Collectively, in class, my students and I have been exploring the ways that minority communities experienced, protested, and changed structures of racial oppression across the country. Last week, during the unit’s introductory overview, I asked my students how the March 14 walkout connected to previous instances of activism. 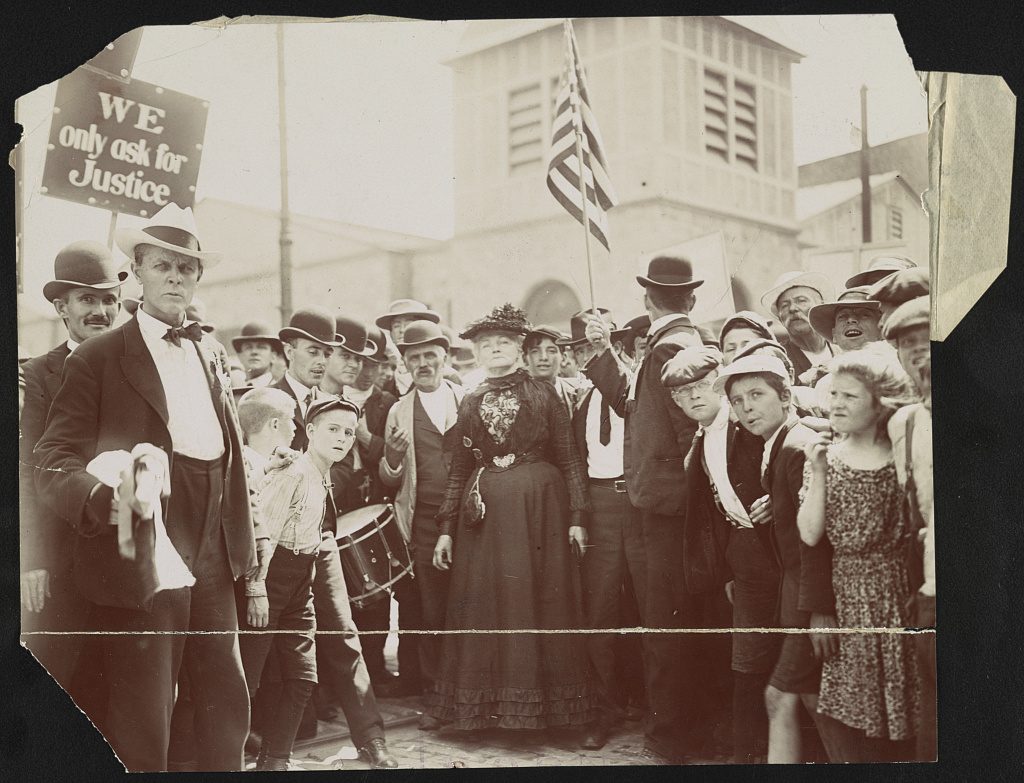 Youth activism has a long history in the United States, including Mother Jones’ 1903 “March of the Mill Children” from Philadelphia to New York. New York World-Telegram and the Sun Newspaper Photograph Collection (Library of Congress)

Most of my students found it difficult to see the similarities, asserting that student activism during the Civil Rights Movement was dominated by college students and that high school students’ protests rarely led to widespread change. This perception gave me pause, prompting me to examine the ways that I’ve been teaching youth activism in my classes. This week, I will be devoting a day in my 11th grade US History class to the study of youth activism in US history. I hope that other teachers interested in connecting 21st-century youth activism with that of the past will find the following lesson plan useful.

Following the principles of “Backward Design,” I plan to begin by stating the lesson’s goal: that students leave with a greater understanding of the history of youth activism in the United States. I also want students to leave the class feeling comfortable with the idea that activism has a deep legacy in American history. Finally, I want them to see this history as relevant to their lives today and to encourage them to think about the historical origins of contemporary strategies and modes of protest.

Over the past year my students have participated in jigsaw discussions, Socratic seminars, simulations, and standard lectures in class. For this unit on youth activism, I hope to combine a few of these teaching strategies. We will begin the class by defining the word “activism,” with each student writing down a definition. Using their descriptions, I hope to build a definition that resembles that of the Oxford English Dictionary, “The policy or action of using vigorous campaigning to bring about political or social change.”

With this definition in mind, we will transition to brainstorming specific instances of activism in American history in small groups (10 minutes) of three to four students. As I’m over three quarters of the way through my US history survey, I’m confident that students will be able to accomplish this task relatively easily. Walking around the room, I’ll encourage students to look beyond activism of the mid-20th century, and to think about who participated and why.

Once students are done brainstorming, we’ll make a timeline on the board of moments of activism using some of their examples (15 minutes). I plan on adding certain examples of my own including abolitionism, the temperance movement, specific labor strikes, and Black Lives Matter. I hope that this exercise will demonstrate the long history of activism and public protest in American history. Together, we’ll discuss what made these instances of activism successful, focusing on the ways that activists called upon their social status and their religious, moral, political, and civic authority to effect change. For example, considering the role of women activists in the temperance movement can demonstrate how they called on their authority as protectors of the home to make a moral and gendered argument for the prohibition of alcohol.

With this grounding in the history of activism, I will spend 20 minutes walking students through four examples of youth activism, focusing on both participants and their methods. We will begin with Mother Jones’s 1903 March of the Mill Children, where more than 200 child laborers marched from Philadelphia to New York to protest horrific working conditions in the textile mills of Philadelphia. Sixty years later, thousands of young people marched again in Birmingham, Alabama, in the Children’s Crusade to end segregation. Next, we will discuss the role of Mexican American youth in the Chicano/a movement by looking at the East LA Walkouts, when more than 10,000 students walked out of school in March 1968 to protest their schools’ attitudes toward Mexican American students. Finally, we will look at contemporary youth activism in the form of GSA clubs, DREAMers, and the role of black high school and middle school students in the Black Lives Matter movement.

Throughout this discussion of youth activism, I plan on asking students how the positionality of these youth activists shaped their protests and its efficacy. How did their youth shape the broader public’s reaction to their demands? What difficulties did they, as young people, encounter and how did they overcome them? What made these activists particularly effective at protesting inhumane working conditions, segregation, discriminatory funding, or immigration policy? What lessons might we learn from their activism that can be used by other people protesting for change? I’ll conclude by asking what the students tomorrow are protesting and why the Parkland students have received so much attention compared to other contemporary youth activists. Students will leave with an assignment to find images of three past protests, analyze them, and think about how they are connected, or not, by goal, participant, and effect. Ideally, students will leave with a broader picture of activism’s historical roots, the connections between today’s strategies and those of yesteryear, and the role of youth in protesting for social change.