How the Feds Reshaped Higher Education

The paradox of American higher education is that it is at once so successful and so controversial. Our best universities consistently stand at the top of international rankings, and more than a third of Americans now hold bachelor’s degrees, the highest rate on record. Yet colleges and universities have become lightning rods in the culture wars, and concerns about student debt have spurred increasing calls for colleges to control their costs. The House Committee on Education recently approved a sweeping overhaul of federal legislation related to higher education, including controversial provisions that critics charge will make student loans more costly. The Senate is expected to take up similar legislation soon. With this as backdrop, the National History Center brought two leading historians of higher education to Capitol Hill to explain to congressional staff members and others how the current system came into being and what we can learn from its creation. 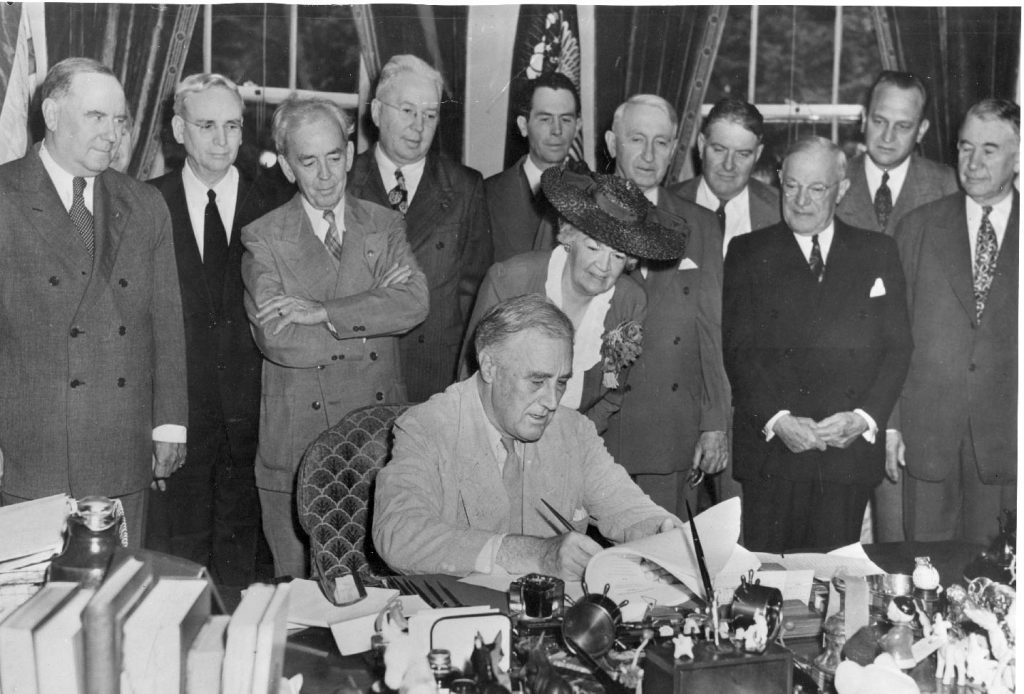 President Roosevelt signs the Servicemen’s Readjustment Act of 1944, or the GI Bill. The bill’s success demonstrated that GIs, and people from all classes and ethnic groups, could benefit from a college education. FDR Library/Wikimedia Commons

The developments that laid the groundwork for the landmark Higher Education Act of 1965 were detailed by Patricia Albjerg Graham, the Charles Warren Professor emerita of the history of education at Harvard University. Americans’ “love affair” with higher education, she noted, started at the end of World War II. The war demonstrated that scientific research by university faculty was vital to national security. This spurred the federal government to finance research through the newly founded National Science Foundation, the National Institutes of Health, and other agencies.

Simultaneously, fears that the demobilization of millions of ex-servicemen would bring about high unemployment led to the passage of the Servicemen’s Readjustment Act of 1944 (the GI Bill), which was designed to delay their entry into the labor market. The leaders of most major universities, which then catered mainly to white male elites, doubted that the GIs could do college work. They were, however, proven wrong—the success of the experiment showed that every social class and ethnicity could benefit from higher education. This view led to the drafting of the Higher Education Act, one of a raft of “Great Society” legislative measures that passed in 1965. Tellingly, President Lyndon Johnson signed the law at his alma mater, the decidedly unglamorous Southwest Texas State Teachers College (now Texas State University). Its main aim was to expand higher education opportunities for the poor.

But how would they pay for college? The original act’s funding provisions were fairly modest, and the federal legislation that followed focused on financing new students. John Thelin, university research professor at the University of Kentucky, detailed this story in his presentation. Some members of Congress favored direct grants to universities, but in 1972 the decision was made instead to offer portable grants to students themselves. The Basic Education Opportunity Grant Program (popularly known as Pell Grants) set off a new era of student consumerism as colleges competed to attract students with federal funding. This happened, however, in the context of double-digit inflation and stagnant incomes, setting off the now familiar debate about the rising cost of college. It also pressured Congress to respond to middle class families’ growing complaints about cost by establishing a low interest loan program, the Middle Income Student Assistance Act of 1978. Originally, it was seen as a boon to the middle class, but mounting student debt transformed it into a new source of discontent about the financial burden of higher education.

Following Graham and Thelin’s formal remarks, discussion focused on the challenges that confront higher education today. The era of Pell Grant funding may be nearing its end, suggested Thelin, who observed that banks and other big lenders have come to dominate student aid. This has made it harder for the poor to access higher education, added Graham. In response to a question about whether colleges should focus on job training, she cautioned against it, insisting instead that they should engage students in ideas and critical thinking.

A related question concerned “for profit” or proprietary institutions of higher education. Those that maintain rigorous standards, according to Thelin, often meet the needs of military personnel and other constituencies underserved by conventional colleges and universities. Graham, however, noted that many “for profits” don’t maintain such standards: program completion rates are low, student loan rates high, and innovations by faculty meager, making them poor social investments for the state. Another member of the audience wondered what the panelists thought about the draft House reauthorization bill’s plan to eliminate funding for teacher training programs, an integral element of the original 1965 act. Graham’s response was that affluent school systems might not need any help attracting trained teachers, but poor ones certainly do.

The briefing drew a large and engaged audience of congressional staffers and other policy specialists, evidence of the attention this subject is attracting on Capitol Hill. What Graham’s and Thelin’s remarks made clear is that the federal government has been instrumental in transforming higher education from the exclusive preserve of young white male elites to an instrument of social opportunity for Americans of all social classes, ethnicities, and genders. From the GI Bill to the 1965 Higher Education Act to the Pell Grant program and more, federal policy has helped expand higher education, make it available to a much larger and more diverse population, and spur research. The question facing legislators today is whether these achievements can be sustained, much less built upon.