Historians Argue against a Unitary “Politics of ’68” 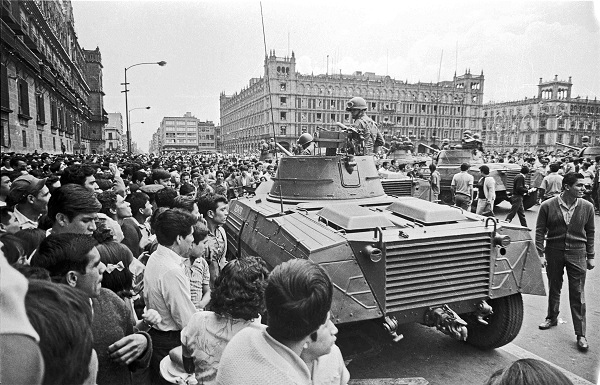 In May 1968, French students and workers, protesting consumerism, capitalism, and US involvement in Vietnam, engaged in the largest general strike in the country’s history. Over the course of two months, activists nearly shut down the national economy and caused President Charles de Gaulle to flee to Germany briefly. The strike finally ended when de Gaulle dissolved the National Assembly and held new parliamentary elections on June 23. Four years later, during Nixon’s trip to China, Premier Zhou Enlai declared that it was “too early” to assess the impact of the “French Revolution.” Much to observers’ confusion, Zhou was referring to 1968, not 1789. The ideas and movements of 1968 were still lingering.

Now, on the 50th anniversary of 1968, historians are still evaluating the impact of that momentous year. The textbook interpretation is that it was an iconic moment of rupture—a year that embodied the social change and political unrest of the so-called Long Sixties. More recent historiography adds a transnational analysis. In January 1968, the Prague Spring saw a period of political relaxation and liberalization in Czechoslovakia, which was to be invaded by Warsaw Pact nations in August. In April, Martin Luther King Jr. was assassinated, setting off massive riots and protests in almost every major city in the United States. In June, Senator Robert F. Kennedy, a presidential candidate and former attorney general, was also murdered. And in October, Japanese police assaulted and arrested more than 1,000 activists during the International Anti-War Day mobilization. As the New Left rose in the mid-1960s to protest against US involvement in the Vietnam War, it was matched by a right-wing base that had also been growing around the same time.

At the 2018 AHA annual meeting in Washington, DC, historians concurred that there cannot be a “politics of ’68” because the actors and activists involved were so multifaceted. In a six-session mini-conference, “Fifty Years after 1968: Research on the Global Sixties,” organized by Chelsea Szendi Schieder (Meiji Univ.), panelists integrated the concepts of race, class, and gender into ongoing transnational analyses of 1968. Their topics included global Black Power movements, Third Worldism, the rise of the global New Right, state and activist violence, social movements, and higher education. Protests, strikes, and riots rocked the world in 1968, but, these historians argued, simplifying their causes and effects homogenizes drastic change and revolution.

For example, the influence of various strains of Marxism in the 1960s can be seen on a transnational scale. Hongshan Li (Kent State Univ.) discussed the relationship between Mao Zedong and American civil rights leader Robert F. Williams, who sent the revolutionary’s books to black activists in the United States. Members of the Black Panther Party carried Mao’s texts with them and nurtured a growing sense of class consciousness that was in direct conflict with US capitalism; they were soon advocating for an international socialist revolution. This secular, revolutionary class framework, however, did not translate to all parts of the globe due to local and regional factors.

Stephanie Boyle (New York City Coll. of Tech.), in a presentation about Egypt’s student and labor protests in 1968, argued that Marxism in Egypt “was not acutely secular.” Rather, activists developed their own brand of religious Marxism, which, she said, emerged from a “rejection of Western imperialism.” During the sixties, activists embraced Gamal Abdel Nasser and pan-Arabism as antidotes to the uneven economic power balance between the formerly colonized Middle Eastern nations and the West. But Nasser’s loss to Israel in the 1967 Six-Day War and his administration’s subsequent actions discredited pan-Arabism and led to the 1968 protests. In the wake of the protests, religious conservatism began to flourish in the entire region, ultimately culminating in the 1979 Iranian Revolution.

The events in Egypt point to the importance of including global conservative reactions and movements in the historiography about 1968. Until relatively recently, argued Anna von der Goltz (Georgetown Univ.), books and journal articles about the sixties would underplay the parallel conservative movements opposing leftist groups. At the annual meeting, von der Goltz showed that in West Germany, “center-right activists were a part of the mix in 1968” and had their own brand of internationalism. When historians include these activists in the narrative, it “complicates this reading of the generation. Not all people were left-wing activists,” she emphasized.

Even on 1968’s 50th anniversary, it may still be too early for historians to evaluate the year’s impact.

Luis Herran Avila (Carleton Coll.) furthered this argument by analyzing the Argentine neo-fascist group Tacuara and the Mexican group University Movement Oriented toward Renewal (MURO) as “two distinct manifestations of the encounter between fascism, Catholic nationalism, and the revolutionary imagination of Third Worldism.” These groups, said Herran Avila, took pride in representing youth dissatisfied with “liberalism and the false solutions of Maoist leftism.” As von der Goltz stated, conservatism was not, and is not, an “amorphous blob.”

Conservative response partly grew from a fear of the massive changes occurring in the late 1960s. White American reaction to the Civil Rights Movement, as Ibram X. Kendi (American Univ.) pointed out, was built on a fear of black and African American supremacy. “In the racist mind,” he argued, “resisting African Americans and the non-white world resisting Western imperialism worldwide were not merely fighting for power and freedom; they were fighting to rule and enslave the white world.” In 1968, reacting to years of civil rights protests and decolonization movements, US presidential candidate Richard Nixon baited white Americans by emphasizing a return to “law and order.” In Japan, the police built their legitimacy in the late 1960s and 1970s on public fear of leftist activists. Takemasa Ando (Musashi Univ.) argued that in 1969, the media started calling protesters and activists “extremists” and “non-citizens” in an attempt to “isolate . . . and stigmatize” them. In contrast, the police branded themselves as the only defense against the lawlessness of these people. The fear present in 1968, Kendi explained, was “fundamentally global and local.”

Panelists also decried the lack of race, class, and gender analyses in the existing historiography. In her discussion of student protests in Guatemala in 1956 and 1962, Heather A. Vrana (Southern Connecticut State Univ.) argued that the narratives surrounding the country’s early movements tend to focus on the “the figure of the heroic universitario—the young, Latino, middle-class, male university student—as the embodiment of the student struggle in popular memory.” But this, she argued, fails to consider the roles of women and secondary students who often protested the gov­ern­ment while studying in state-run schools. These groups were more likely to include youth from lower classes. Women were also less likely to receive a university education in Guatemala than their male counterparts, and therefore their active participation at the risk of deadly state violence was easily written out of narratives about the student protests. These Guatemalan protesters, Vrana contended, fell “outside the chronology of the summer of ’68” and thus the Western narrative of the global sixties privileging events in the United States and Europe.

Understanding these nuances has generally moved historians to recognize the complexities of historical actors and groups. William Marotti (Univ. of California, Los Angeles) warned against the danger of forcing activists into simplistic groupings. When “‘students are students’ and ‘workers are workers,’ you just erase all of the motion and movement of what’s happening” in 1968, he said. Globally, people reacted to circumstances that seem similar but were actually place-specific. The Vietnam War was a flash point on both poles of the political spectrum, but local problems, such as the loss to Israel in 1967 for Egypt and the Civil Rights Movement in the United States, instigated demonstrations of their own. “Politicization,” Marotti contended, “was both intensely local and global at the same moment, and was also multidirectional.”

High school and undergraduate students tend to view 1968 as a series of small fires throughout the world, appearing one after the other as the wind spreads the embers. This idea, however, presumes an original fire, commonly seen as happening in the United States. Marotti resisted this sense of a single origin, instead contending that historians can sense “shared political agencies” without assuming knowledge of “what this other person is experiencing.” “You can be moved by it and move in parallel,” he emphasized. In his conclusion, Marotti issued a warning to historians: “You will come across many, many actors saying very similar things and having no idea about each other. And that’s a deep level of synchrony that we have to pay attention to. This is a reality of this movement.”

As Stephanie Boyle argued, “1967 and 1968 is not over; it’s still going on.” The events that happen in the Middle East and globally are not just things that “happen over there”; they are major forces in the dynamics of politics and the geopolitical realities that are still happening. Fifty years on, she continued, 1968 is a “story that is still going on and absolutely not finished.”