The Forest and the Trees: Thinking Historically, Working Locally 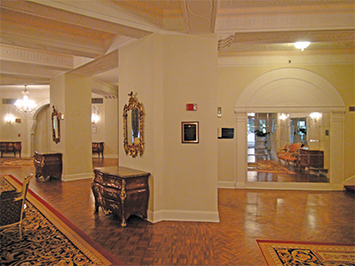 If you attend the annual meeting in Washington, DC, this January, and pass through the old lobby of the Marriott Wardman Park Hotel, you may notice a plaque commemorating the site as the place where Langston Hughes, a busboy at the hotel, placed several poems before the poet Vachel Lindsay in 1925. Lindsay later shared the poems with an audience, and Hughes, who had already been published in magazines and had already signed with a major publisher, shrewdly leveraged the resulting publicity and “discovery” by Lindsay.

There’s quite a bit of mythology around this story, as there is with any rise from obscurity, but it seems to be an event worth noting and marking. It wasn’t the hotel that did this, however. Andrew Carroll, the editor of several volumes of letters and a literary and historical activist behind a plethora of innovative projects, placed the plaque as part of the Here Is Where initiative, a volunteer effort that seeks out and identifies unmarked historical sites.

During the last year, Perspectives has seen a heartening number of authors interested in “wider world” histories, global perspectives, and giving more time to misunderstood and neglected distant regions. But we have also received a number of articles reminding us that historians, students of history, and a good portion of the general public have an abiding interest in what happened next door.

I reflected briefly in the October Endnote on my analytically unsustainable, yet unshakable, feeling of connection to a historical subject through people who knew him. These feelings of connection can also rise up through a sense of place. Plaques, markers, and interpretations placed by enthusiasts like Carroll, local history societies, or the National Park Service are striking not just because of the stories they tell, but because one can look around the sites they mark and understand the continuity of the place, yet still experience the difference created by change over time. Place offers up an elusive sense of connection to the past, but no place can be known as it was to the historical actors—and we know this most forcefully when we stand there.

But while the sense of connection I mentioned in October was a very private experience, the sense of connection we find in these historical sites often inspires us to collaborate. This issue contains three articles about doing history on a very local level, and each article is also about collaboration. Joshua Bill, a high school teacher in Waukegan, Illinois, found a willing collaborator in the local historical society, which led to a lasting connection between the society and his school, and in particular between the society and his students. Joseph Cialdella describes a collaborative effort that involved staff at a historic site, a team of graduate students, and the surrounding community and that led to a broader, more complete, and more inclusive interpretation of the site. And Bob Reinhardt designed a class project that naturally lent itself to a collaborative effort—telling the environmental history of a local forest.

Working locally seems to lend itself to these sorts of collaborations because we encounter people who are particularly invested in our interpretations—here historians are doing their work in a place where people actually live, labor, or study. Of course they will have something to say, of course they will feel invested in the outcomes. What’s encouraging about all these articles, however, is how the historians went beyond the role of explainer and interpreter, and invited those invested in these locales into the discipline. Joshua Bill’s stated goal, for example, was to teach his students how to be historians, not just good students in a history class.

So collaborators described in these articles go forth, as historians, to tell the story of an abandoned factory, what happened in 1925 in a local hotel, about topographical changes on a particular hillside, or why there’s a hidden staircase in an old building. This may seem self-limiting to historians who study broad social changes, global networks, or far-flung cultures. It might be just that, except for the fact that the historians involved shared not just their knowledge but the secrets of their discipline. And so their collaborators gained a historian’s version of Google Glass, a vision that sees past and present in a single place, that sees plaques, markers, and the questions they raise on every corner.

—Allen Mikaelian is the editor of Perspectives on History.

Tags: From the Editor Public History