The Anarchist Cinema of Peter Watkins

This is round shot. This is what it does.” A three-­pounder cannon fires its load; the camera moves into a tight focus on its victims. The wounded men are barely visible amid the smoke of battle and the graininess of 16-­millimeter film. An authoritative voice-­over tells us their names, ages, and conditions: Alastair MacInnes, 20 years of age, right leg severed below the knee joint; Malcolm Angus Chisholm, 24, disemboweled; Ian MacDonald, 13, shot. The style is pure newsreel: shaky photography, rough film stock, confused action, on-­screen interviews into the camera. The battle was the last ever fought on British soil, in 1746. Surely there wasn’t a camera crew on Culloden Moor? We suspend our disbelief.

Shortly before the harrowing shots of the wounded, we saw the Whig historian Andrew Henderson cowering behind a stone wall, telescope to his eye, like some 18th-­century Walter Cronkite or John Pilger, telling viewers, “It’s going to be very difficult to see what effect our cannon is having on the rebel lines.” The omniscient camera sees what men in the melee cannot. Only daring anachronism can illuminate the battle historically. 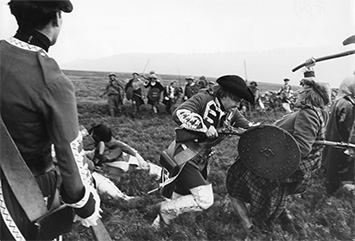 The moments are from Peter Watkins’s Culloden (1964). The film premiered on the BBC in December 1964 to such strong audience reaction it was rebroadcast six weeks later (on the day I was born, as it happens). Scenes like this established Watkins’s precocious mastery of his medium: he was not yet 30 when he directed Culloden.

Watkins also comments trenchantly on the “media crisis” wrought by the “mass audiovisual media” of film and television and their commitment to the “monoform”: rapidly cut, fast-­moving narrative propelled by extraneous music and often spiced with prurient violence, projected at the audience but not engaged in communication with them.2

His unmistakable style—­handheld filming, long takes, tightly cropped faces, mostly monochrome stock, voice-­over narrations, contextual captions, and nonmusical soundtracks—­is a rebuke to that monoform. Immersing oneself in his historical films, as I did this past summer, makes watching most contemporary commercial movies unbearable. They feel antic, deafening, manipulative, and complacent. You see film and historical narrative quite differently through Watkins’s eyes.

Watkins’s reputation rests on a handful of works. Culloden, The War Game (1965), Edvard Munch (1973), The Freethinker (1992–­94, on the life of August Strindberg) and, above all, La Commune (Paris 1871), released in 1999, mark him as one of the few truly transformative—­both aesthetically original and politically radical—­directors the medium has produced.

I suspect Watkins would find that judgment irrelevant: he has never been much of a cinéaste, gives little credit to his predecessors, and claims little kinship with his contemporaries. (Apart from his general debt to Italian neorealism, Truffaut’s 400 Blows is a rare source for Watkins’s cinematic grammar.) He has always drawn less on other films than on other forms—­especially photography from Paris Match and Life, newsreels, amateur dramatics, and community theater. He is more openly indebted to historians than he is to other auteurs. And he has always leaned heavily on the talents of his mostly amateur casts, who give new meaning to historical metaphors of “agency” and “action” in their central contributions to his films.

Watkins’s characteristic visual style evolved alongside this method. His earliest productions—­The Web (1956), showing a German soldier dodging French partisans in 1944; The Diary of an Unknown Soldier (1958), which captures boredom and fear in the First World War; his first mature film, The Forgotten Faces (1960), a poignant re-­creation of the 1956 Hungarian Uprising; and The War Game, a future history of a nuclear attack on England that was banned for decades by the BBC—­all feature nonprofessional actors and an invisible narrator. These works shared a revisionist impulse to play out the past in the present tense. Edvard Munch brilliantly used the same techniques to reimagine film as a medium for capturing the mysteries of artistic creation. And La Commune is the most searching cinematic historical examination of self-­government and its stresses ever committed to film.

The aims of Watkins’s historical cinema could not be further from the costume dramas that pass for historical movies today. Those films are generally formalist and obsessed with superficial detail; they use the past as a place of escape. Watkins’s films are anarchistic productions—­patient, collective, sometimes chaotic, but always fruitfully engaged with contemporary politics. Watkins’s major works share more with the self-­organizing spirit of the amateur theatrical groups in postwar Britain, with which he cut his teeth, than with the regularities of TV episodes or Hollywood time constraints.

Yet just as the historian sees her material fight back against her attempts at control, Watkins’s actors have sometimes rebelled against his direction. In La Commune, particularly, he captures the growing tensions between direction and participation in the making of the film. This deliberately breaks the illusion, but it deepens the director’s engagement with history and memory.

La Commune is Watkins’s anarchist masterpiece. He made it in 13 days in an abandoned factory on the outskirts of Paris, with a cast of more than 200 participants who re-­created the six-­week experiment in socialist self-­government of 1871. Most came to the project as activists, not actors, with a precommitment to Watkins’s own utopianism and his desire to bring contemporary capitalist society and media to account. But the film is not one-­sided: Watkins also advertised in Le Figaro and elsewhere for conservative voices, who convincingly ventriloquize the bourgeoisie, the Thiers government, and other reactionary forces. The media intrudes throughout. Two reporters for the independent “Commune TV” interview characters on-­screen (and receive increasingly angry pushback from the Communards as the crisis accelerates), while broadcasts from the official “Télévision Nationale Versailles” punctuate the action with pompous music, talking heads, and witheringly critical commentary on the Communards’ failings. 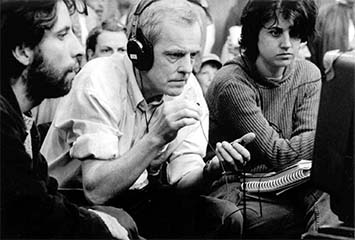 The artifice is inescapable: the film is shot in tight spaces, under even light, and there is no pretense that we are witnessing anything other than a reconstruction with conscious anachronisms. Here, Watkins’s critique of the media meets his historical method with spectacular effect—­indeed, with accelerating energy as it goes out of control in the second half of the six-­hour movie and some of the actors begin to turn against the director’s control.

La Commune is centrally concerned with argument and organization, with collective responsibility and individual culpability, but not with “events” in the conventional sense of the term. Most of its major scenes focus on passionate discussions, filmed at generous length, with many faces in a shot (a change from Watkins’s previous historical works). Where will the female Communards hold their meetings? How will each commune run its affairs? How should they respond to the repressive troops? Why is self-­government breaking down? Who is this man Watkins to tell us what our scene should say, how debate should unfold? The film thrillingly captures the open-­endedness of utopian revolution. You forget the inevitability of the bloody outcome but feel more sharply the pain and confusion of defeat. Two years after the Occupy movement began, the relevance of La Commune has only become more urgent.

Watkins and his actors learned everything social historians could teach them about structure and agency, constraint and contingency. They live it, passionately and grippingly, as they fashion the film and build and defend their communities before our anxious gaze. And the actors have continued to enact their knowledge through the organization La Rebond pour la Commune , which continues the conversations.

Watkins’s oeuvre exposes assumptions about cinema so deeply ingrained we hardly notice them. Why should a film be two hours long but the average length of a shot about four seconds? Why does it need a soundtrack, professional actors, or the illusion of objectivity? And why not use film as a critical, activist medium? Watkins’s assault on media pieties has been so aggressive, so fundamental, that he has guaranteed his own marginality. He has spent most of his life in self-­exile, scraping up funding for his films—­since the 1970s exclusively outside the regular channels. The greater availability of his works should enhance his reputation and his impact, not least among historians. 3

Watkins’s experiments raise questions about historians’ versions of the monoform. Do we have our own species of the studio system, with journals and presses determining not just how but even what we should write? Why should a monograph have six chapters, an article ten thousand words? Should we try new narrative devices, expand the range of actors in our productions, admit to more artifice, strive harder to broaden the impact of our work? The films of Peter Watkins challenge us to rethink our mission by revealing the critical purchase the past has over the present. As the director might say in one of his voice-­overs, “This is history. This is what it does.”

—David Armitage is the Lloyd C. Blankfein Professor of History and chair of the Department of History at Harvard University.

2. Most of Peter Watkins’s writings on the “media crisis” can be found on his website: http://pwatkins.mnsi.net/index.htm, accessed September 1, 2013.

3. All the films mentioned in this article, with the exception of The Web, are available on DVD and on YouTube.