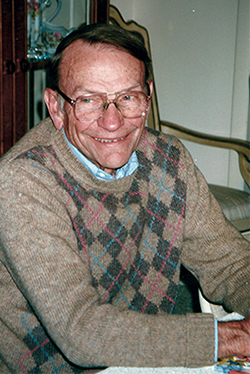 Merton Dillon, professor emeritus of history at Ohio State University, died near his longtime Michigan home on May 4, 2013, from polymyositis. While at Ohio State, and during earlier appointments elsewhere, Dillon taught courses on American history, especially antislavery, slavery and the American South, and the Civil War and Reconstruction. He mentored students working on master’s theses and doctoral dissertations in these areas, but also on topics as varied as African history, American women writers, and southern industrialism. A model teacher-­scholar, Dillon provided carefully prepared lectures and conducted seminars with uncommon grace yet firm insistence on making arguments from evidence. He was especially known for guiding student papers, many of them later published, by insisting that the best way to “discover” and practice history was to immerse oneself in primary sources and acquire empathy—­but not necessarily sympathy—­for people’s ideas and interests in order to understand the worlds they created. Dillon encouraged students to strive for eloquence and precision in their writing, while always reminding them, “Let the sources point the way to argument.” Students were drawn to Dillon for his scholarship and social conscience, particularly regarding African American civil rights, though he never imposed his views on students. He also had a wry wit and an eye for the ironic that made his lectures and any conversation or correspondence a delight. He lived and taught by example, which became one of the principal legacies he bequeathed to his students and colleagues.

Merton Dillon was born on April 4, 1924, in Addison, Michigan. His early life growing up on a farm in south-­central Michigan, his love for and fascination with the land (he was a lifelong gardener), and his Midwesternness all informed his historical perspective and interests. Dillon attended public schools and enrolled in Michigan State Normal College, from which he graduated in 1945. After teaching in Michigan public schools for two years, he entered graduate school in history at the University of Michigan. There he became a member of Phi Beta Kappa and a student of Dwight Dumond, earning his MA in 1948 and his PhD in 1951. Dillon taught at the New Mexico Military Institute (1951–­56), Texas Tech College (1956–­65), and Northern Illinois University (1965–­67) before moving to Ohio State University (1967–­91), which brought him back near his Michigan birthplace, where he returned each summer to write.

During Dillon’s graduate research, Dumond directed him to the study of abolitionism, and Dillon developed a particular interest in early antislavery in the Old Northwest. His dissertation, “The Antislavery Movement in Illinois, 1809–­1844,” set the course of inquiry for much of his life. In this work, and in related articles and two books, Dillon reoriented the scholarship on abolitionism chronologically and geographically. Unlike previous writers on the subject, Dillon emphasized antislavery activities in the Early National Era, before the 1830s, in the West and upper South, rather than starting with Garrisonian abolitionism in the Northeast. Dillon’s first two books—­Elijah P. Lovejoy, Abolitionist Editor (1961) and Benjamin Lundy and the Struggle for Negro Freedom(1966)—­reinforced that antislavery chronology and genealogy while pointing to the importance of early antislavery newspapers as incubators of radicalism and the means whereby reformers devoted their lives to dissent. Dillon always appreciated biography as a telling instrument for history, and he encouraged students and other historians to carefully observe individual lives in order to better understand the ways that place, personality, background, and personal identity informed ideas.

Dillon’s influential 1959 article, “The Failure of American Abolitionists,” in the Journal of Southern History, reflected his belief that in critical ways abolitionists “failed” because slavery ended through war rather than moral argument and political conversion. From this perspective, Dillon began to assay abolitionism more broadly. He insisted that abolitionists always remained “a dissenting minority,” but he also expanded the compass of “antislavery” to include enslaved blacks and free people of color as essential in resisting bondage and putting southern slaveholders on the defensive. The combination of northern abolitionism and southern slaves’ resistance made white southerners feel beleaguered and diminished the trust necessary for political compromise over slavery. Dillon developed his ideas on the causes, character, and consequences of antislavery dissent, and its limits, in his widely respected book, The Abolitionists: The Growth of a Dissenting Minority (1974). He focused on the “long history” of slave resistance and its effects on antislavery ideology and tactics, and on the vulnerability of the institution from within and without in Slavery Attacked: Southern Slaves and Their Allies, 1619–­1865 (1990). Throughout his work, Dillon emphasized the “contingency” of action by arguing that individual choices as much as circumstance “made” history. Such interest inspired the essays in a festschrift to Dillon edited by Randall M. Miller and John R. McKivigan, The Moment of Decision: Biographical Essays on American Character and Regional Identity (1994), which drew on Dillon’s insistence that people came to critical moments in the public sphere that defined and directed their morality and action.

Even as he was exploring various forms of antislavery, Dillon remained interested in the sources of southern thinking. In a sense, he returned to the territory of his mentor, Dwight Dumond, by writing a biography of the renowned and extremely influential southern historian Ulrich Bonnell Phillips, who had been Dumond’s dissertation adviser. Dillon’s book, Ulrich Bonnell Phillips, Historian of the Old South (1985), was part of a new wave of scholarship on Phillips and southern historiography that reexamined the racist underpinnings of southern historical thought.

Upon his retirement, Dillon bought a working farm in Jerome, Michigan, close to his family. He continued to read history and encourage former students and colleagues in their work, but except for short biographical and review essays, he gave up writing for gardening and following local concerns. He is survived by a sister and a brother.