History down the Road: Why Local Historical Societies Should Be the Next Frontier for Your Classroom

My high school teaching job in Waukegan, Illinois, was supposed to be temporary: I pessimistically thought I couldn’t possibly be happy in an economically blighted city where gang violence and drug busts dominated local newspaper headlines. Situated in Lake County, one of the wealthier counties in the United States, and halfway between Milwaukee and Chicago along Lake Michigan, Waukegan is often either entirely overlooked or scrutinized only for its warts. Once a lakeshore retreat for wealthy urban dwellers, the city made the fateful decision to industrialize in the midst of America’s Second Industrial Revolution. Predictably, this created a population boom in Waukegan during the early years of the 20th century. The promise of jobs brought ethnic and racial diversity to the city; anyone familiar with the American narrative knows also the ensuing entwined triumphs and tragedies of such a city’s development. The 1970s, ’80s, and ’90s ushered in the closing of factories and uncertainty about Waukegan’s future, creating a legacy that the city’s youth struggle with every day.

I learned all this at the Waukegan Historical Society while researching an assignment for my class, and I surprisingly fell in love with the city. Likewise, my students have found at the society endless stories to ponder. The Waukegan Historical Society, which was virtually uninvolved with the high school when I began teaching there, enlightened me about the city’s rich history and helped foster a lasting partnership between our school and the society. Its archives transformed my vision of Waukegan and my career. Further, it allowed my students to find an authentic voice, teaching them to think analytically about the legacy and people of their community while sharing fresh interpretations with a proud public. Not least of all, it allowed them to think of themselves as historians.

The Many Faces of Doing Local History

Every year, I watch students who seem passionless and disengaged spring to life as they research Waukegan’s history. One of the most meaningful and rewarding ways to get students interested in local history is through the National History Day competition. While I allow students to pursue a subject that does not pertain directly to Waukegan, I highly recommend that students consider focusing on their hometown. It helps that the Waukegan Historical Society provides an annual award of $500 for the best Waukegan-­themed student project. After some initial hesitation in response to the enormity of the project (it begins in late fall and spans at least through the winter, or further if they advance in the competition), students are liberated by the open-­ended nature of the task and become enthralled by the stories that too often have lain dormant in the society’s files.

One of the most difficult facets of any student research project is picking the right topic. It’s essential that students find something they are enthusiastic about. If students can’t sustain interest in their topics, they will be unhappy until the assignment is over; what’s worse, the experience might turn them off history for good. Some students will immediately know what they want to research, and the only thing that could possibly stop them is a lack of information. Other students might just need a list of topics to sift through. The Waukegan Historical Society has prepared a list of research topics and is constantly adding new ideas, but I also encourage students to take a walk downtown and take note of buildings they find fascinating, or I recommend a project on their schools or churches.

Provide students with enough resources, and they will latch onto the right focus. Once they are in the local archive, students will come to life as they see pictures of or read about their neighborhoods. Several students have explored civil rights issues, including an exhibit on how race riots in Waukegan demonstrated the division between violent and nonviolent approaches to America’s civil rights movement and a documentary on the legal battle to end de facto segregation in Waukegan elementary schools. The stories of the different immigrant groups that came to work in Waukegan factories throughout the 20th century have proven popular with Waukegan High School’s first-­generation Latino immigrants, who empathize with the struggles for acceptance and learn from the strategies earlier groups used to overcome the strife that is endemic to being new to America. In these stories, students discover disheartening accounts of inhumanity, but the stories also reveal the courage of those who set out to change systems of injustice.

Students who take my advice to walk around the city in search of topics stumble upon intriguing stories tied to Waukegan’s older buildings. One group discovered that the Lake County health department building was once the city’s tuberculosis sanatorium. This past year, a group of students looked into Waukegan’s Carnegie Library, which is disappointingly abandoned and falling into disrepair, and created a documentary revealing that this was where famed author Ray Bradbury fell in love with books. Another group told the story of the rise, fall, and rebirth of Waukegan’s downtown as a microcosm of so many declining downtowns nationwide. There are still countless untold histories for future students to investigate, but every year I am amazed at my students’ tenacious research and moved by their heartfelt perspectives.

Students have also brought their projects to the attention of the greater community. They have delivered impassioned pleas to city and county officials to preserve historical buildings, played their documentaries about pollution as previews at a local theater, and participated in the downtown arts renaissance. The local newspaper, at one time hard-­pressed to find positive news to report about city schools, now frequently writes about the student historians at Waukegan High School.

Sharing in Their Journey 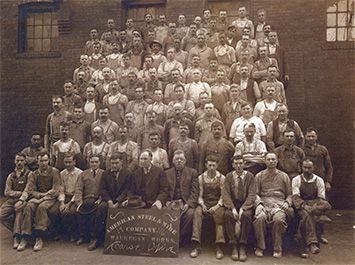 Student enthusiasm for undertaking a local history project does not come magically; I spend significant hours ensuring that students’ personal journeys to becoming historians are successful. Every year, in the late summer and fall, I reassume the role of a scholar, burying myself in the resources held in the Waukegan Historical Society. This essential step ensures that I stay acquainted with the rewards and pitfalls fundamental to primary source analysis—­from the exhilaration of hunting for details about an intriguing subject to the confusion and bewilderment of hitting a wall. It’s vital that teachers experience these moments so they can teach problem solving and coping strategies. In order to teach our students to be historians, we must stay engaged with the art of historical detection ourselves.

I have been fortunate to have experienced an incredible amount of success, and I believe the best is yet to come. My partnership with the Waukegan Historical Society and its wonderful staff and volunteers (to whom I would like to extend special thanks) reignited the fire that inspired me to teach history in the first place. Even if none of the accolades or positive publicity surrounding my students had happened, the net gain of using local history is amazingly empowering for students and their neighborhoods, as they form attachments to their city that they will remember for years to come.

—Joshua Bill teaches US history at Waukegan High School in Waukegan, Illinois. He received the National History Teacher of the Year Award from the Gilder Lehrman Institute of American History in 2012.