Finding a Sense of Place: A Surprising Experiment in Place-Based Collaborative Learning

In the spring and fall of 2012, I designed and taught two iterations of a course called An Environmental History of Zena at Willamette University in Salem, Oregon. The class became an exercise in place-­based, interdisciplinary, collaborative learning, but it started off as something much simpler: I wanted to know more about Zena Forest, a beautiful 300-­plus-­acre property in Oregon’s Willamette Valley that the university purchased in 2008, and that the school used for research, teaching, and conservation purposes.

As an environmental historian devoted to the liberal arts, I was eager to work closely with students on an interdisciplinary project focusing on a particular place, and Zena seemed like a perfect opportunity. I wanted scientists to work in the archives and historians to work in the muck; telling a comprehensive story about Zena’s past—­from its geological origins to its future as an educational space—­would require my students and me to leave behind our disciplinary boundaries. I knew of similar courses taught by Michael Lewis at Salisbury University and Matthew Evenden at the University of British Columbia, but I wasn’t quite sure how my class would come together.1 It was thrilling.

Writing a Book Together

Like Lewis and Evenden, I wanted a tangible product: a book published either in print or online. In the process, students would achieve, I hoped, a variety of pedagogical outcomes, many of which the AHA’s Tuning project has explored: students would analyze change and continuity over time; develop skills in research, analysis, and narrative; and learn to use a variety of disciplinary tools.2 I made collaboration fundamental to the structure of the course: I would work individually with students, students would work in small groups, and the whole class (including me) would work together in imagining, planning, and creating this new book. The resulting syllabus looked unlike anything I had seen at the undergraduate level. After a few weeks of preparatory work—­general background on Willamette Valley history coupled with readings in the methods of environmental history—­the schedule went blank. I insisted on some essentials (outlines, drafts, peer reviews), but the students would decide exactly how we would get to the end product.

Students were surprised to learn what they had signed up for, but they embraced the challenge. They quickly decided on the book’s content and distributed responsibility for each chapter. They scheduled due dates for outlines, drafts, peer reviews, and the final presentation, which they decided should be a public event. And they embarked on their research, often contacting and working closely with a variety of community members: nearby farmers, local archivists, government officials, etc. This is one of the virtues of local history: the paucity of primary sources requires forming partnerships with people who know the place well and can help locate the materials (and memories, often) needed for historical analysis. Such partnerships yielded fascinating discoveries for our project: explorations of Native American land-­use practices, emotional interviews with local landowners, damning critiques of federal agencies, controversial debates within the university about the property’s purchase, and much more.

Perhaps most important, the students decided the book needed a unifying theme, and they settled on “sense of place,” a concept we discussed after reading Keith Basso’s Wisdom Sits in Places. This initially surprised me; I thought that the unique topic and our environmental history approach sufficiently unified the book. But the students wanted a more tightly integrated text, and sense of place provided a framework and vocabulary that connected different historical actors at different times, from the native Kalapuya people to migrant workers at a nearby winery. Moreover, the students realized that they themselves had a sense of place—­at home, at school, at Zena, etc.—­and so they could identify with their historical subjects. In other words, we were learning to “practice historical empathy” (as the Tuning project puts it), a difficult lesson to teach in the abstract environment of the classroom, but one that developed nearly on its own as we focused on a specific, tangible place. The theme became one of the most interesting aspects of the project, with fascinating discussions ranging from the power of one’s sense of place to questions of self-­identity. Given the space to determine the objectives of the project, the students far exceeded my expectations. 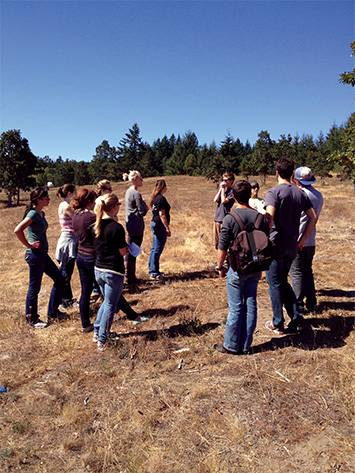 Yet we did not quite achieve our lofty goals. Although most chapters in the finished book posed interesting analytical questions, few answered those questions, and almost none engaged existing historiography. Some students conducted in-­depth interviews, but most chapters incorporated very little original research. Sadly, few of the scientists went to the archive, and few of the historians did any fieldwork. In short, we had not, in fact, become interdisciplinary experts on the environmental history of Zena. That became painfully obvious at the public presentation, which showcased the amount of work and energy the class devoted to the project, but left the audience wanting more information and analysis. One memory in particular pains me: when asked a straightforward question—­from whom did the university buy the property?—­we were stumped. And, I think it’s fair to say, we were embarrassed.

This was entirely my fault. I inflated expectations about what could be achieved in less than a semester by people who had never heard of environmental history, much less done it. This was the first college-­level history course for most of the environmental science students, and the few history majors in the class had little experience working with scientific research. More important, I failed to give the students the support they needed and often asked for: how to plan a research agenda, access useful archives, identify the relevant secondary literature and situate oneself within it, and make use of the appropriate methodological tools and approaches. In my enthusiasm for collaborative learning, I had not done enough teaching.

Despite my blundering, the class produced an intriguing text, and there were opportunities to build on that progress. I received a faculty research grant to fund publication of the book—­more time for editing!—­and I would teach the class again the next semester. The second iteration of the course began with a thorough review of the first draft. That review reinforced what the previous class had concluded: the book needed more research, more engagement with existing scholarly literature, and clearer argument and analysis. The second class decided to revise, rather than rewrite, the first class’s work, and I took a more active role. I met with each student individually to craft a detailed research agenda with objectives and deadlines. I worked with students to identify the relevant literature for each chapter and, when necessary, directed students to incorporate specific secondary material. I sought out colleagues in geology, anthropology, biology, and other disciplines; they generously offered their time and expertise to the student authors. And I was much more engaged in the writing process: each student and I outlined every chapter (in sometimes painful detail), planned exactly what needed to be changed, and reviewed multiple drafts. It was, for everyone involved, a lot of work.

Thanks to that work, the second class produced a book that is detailed and complex, yet also concise and clear. But I hesitate to use the word “better,” because that suggests two competing texts. Instead, the final product was truly the work of both classes; even I can’t really say which parts of each chapter belong to which individual student. So the book became a collaborative project not just among the students and with me, but across two different groups of students. All of those students came together for the final presentation, which was also the release party for the book: Finding a Sense of Place: An Environmental History of Zena (Polebridge Press, 2013). It was a thrill to distribute the book to the students—­and to see audience members buy their own copies! More than a few students blushed with embarrassment when asked by faculty members to sign the book.

I soon moved on to a postdoctoral fellowship, and I am currently focused on finishing my book about the global eradication of smallpox. But I look forward to teaching a course like this again, and I have already started thinking of potential changes, such as team-­teaching the course with a “proper” scientist. Ultimately, though, the changes I make will not be as important as what made the course special to begin with: the place, the collaboration, and the students themselves.

—Bob H. Reinhardt is the A. W. Mellon Postdoctoral Fellow in Humanities at Carnegie Mellon University.