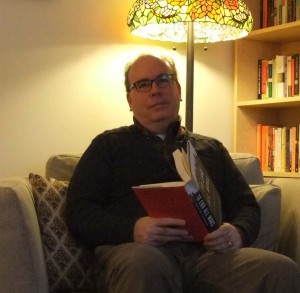 Michael Clinton is an associate professor of history at Gwynedd Mercy University. He lives in Lower Gwynedd, Pennsylvania, and has been a member of the AHA since 1989.

Listening to my older family members talk about the things that happened long ago in places far away activated my historical imagination as a child. In school, I can remember a very specific moment during a fifth grade class as I was reading a history textbook out loud to the rest of the class. It stated something like, “Historians now believe that Vikings landed in America even before Columbus.” I stopped to ask my teacher, Ms. Keogh, “What’s a historian?” She explained, to my utter amazement, that some people got to learn about history as their job! I resolved right then and there that I would become a historian. In eighth grade I had an assignment to research and write about the career that I wanted when I grew up and submitted my report titled “Becoming a Historian.” I even wrote to the AHA office in Washington and got several letters back that told me in detail all about what historians did and how to become one. Unfortunately, I don’t have the letters anymore, but my mother saved the report that I wrote—which I still have. Mothers can be pretty reliable archivists.

My research focuses on the peace movement in France during the half century that preceded the First World War. These men and women based their commitment to peace not so much on religious sentiment but rather in a faith that such developments as increasing economic interdependence, more extensive global communication and exchange, and a growing interest in international law and arbitration created the resources and the motives that could significantly reduce the incidence of war, if not entirely eradicate it. More recently, I’ve been looking at the European Center of the Carnegie Endowment for International Peace during the time when it was headquartered in Paris under the direction of Paul-Henri d’Estournelles de Constant from 1911 until 1923. Although run directly by Europeans like d’Estournelles, its creation meant that Americans became more directly involved with the European peace movement, and so it’s fascinating to witness the dynamics as these different movement and organizational cultures interacted with each other—and not always so peacefully—especially amid the intense drama of a world war.

My interests are much broader—literally more global—than they were when I was in graduate school. These days, I’m as likely to read about Muslim travelers along the Silk Road or about cultural constructions of Cleopatra as about the Dreyfus Affair. This is due most basically to the reality that graduate school requires a rather fixed gaze on a very specific topic, and so one’s horizons naturally widen a bit afterwards. Moreover, teaching at a small institution like my own requires that I offer courses covering the full regional, thematic, and chronological range necessary for a history program. The turns towards world history and interdisciplinary approaches that were only just building momentum while I was in graduate school have also helped to broaden my interests by more readily presenting opportunities to be exposed to the wider scope of historical perspectives that I had less opportunity to explore then. Finally, there’s the basic curiosity and interest in different times, places, and points of view that made me become a historian in the first place.

For about 10 years now I’ve used Jonathan Glover’s book Humanity: A Moral History of the Twentieth Century (Yale Univ. Press, 2001) in my honors-level humanities course. It’s an excellent example of how historical understanding can serve as the matrix for considering profound human issues that connect with philosophical concepts, sociological dynamics, economic patterns, psychological insights, and a whole range of perspectives that people draw upon to construct some meaningful sense about the world and their place in it.

Online, I often refer to the History News Network and the Ohio State University History Department’s site Origins: Current Events in Historical Perspective to find items that I can present to students as examples of how people everywhere get into debates about the past because it matters to them today—whether it’s textbooks in Texas or Japan, television dramas about the Tudors or the court of Süleiman the Magnificent, or demands to repatriate the Parthenon sculptures to Greece or prevent the smuggling of cultural artifacts out of Africa.

It’s easily the freedom and the fulfillment, exactly as I had imagined it when I realized in fifth grade that this was the profession for me. I spend my time exploring, learning, and engaging in a process that is always renewing itself.

It affirms my identity as a historian and my commitment to the discipline as a community of scholars.

I attended my first AHA meeting during my first year as a graduate student at Notre Dame, in 1989. A friend and I took a bus from South Bend, Indiana, all the way to San Francisco. The annual meetings were held during the last week in December back then, so we spent Christmas Day on the bus going out there and brought in the New Year on the bus coming back. It was a travel experience that I’m glad I had but would never want to do again! The conference was worth enduring the dehydration and leg cramps: among other sessions, I attended one that featured François Furet discussing the French Revolution just as its bicentennial year was coming to a close. Over the past few years, I’ve taken advantage of the special rate that the AHA offers and have accompanied some of our undergraduate history majors on their own first trips to the annual meeting—minus the dehydration and leg cramps.

I’m very passionate about ensuring that history, the humanities, and the liberal arts in general remain a valued and central focus of higher education amid trends to reduce college to an efficient process of professional credentialing. Those who insist that college needs to prepare students for the “real world” seem to have a rather simplistic and limited notion of it than the “real world” that students will encounter as a place much fuller and more complex than where they end up working.