A Place of Collaboration: Cliveden and the Merits of Reevaluating a Landmark’s Past

Cliveden, an 18th-­century Georgian mansion, occupies a prominent plot in the Germantown neighborhood of northwest Philadelphia. With its impressive facade of Wissahickon schist, two flanking dependencies, and a gable roof topped with five massive urns, Cliveden conveys the sense of importance viewers might expect from an officially dedicated National Historic Landmark (NHL). Yet the site, physically cordoned off from the surrounding neighborhood by an iron fence and dense foliage, has long had an air of mystery about it, particularly for nearby residents. This was due in no small part to the fact that much of its history related to slavery and domestic servitude was known but remained hidden from the site’s interpretation and official record.

To help bring these stories out of the shadows, my colleagues and I, all graduate students at the University of Michigan, partnered with Cliveden’s staff, the National Park Service, and members of the surrounding community to revise the site’s NHL nomination. In the process, we used the energy of collaboration and rigor of cocreation to tell a new history that would help dispel much of this mystery and weave the story of this structure into that of the slaves and servants who made it function on a daily basis. 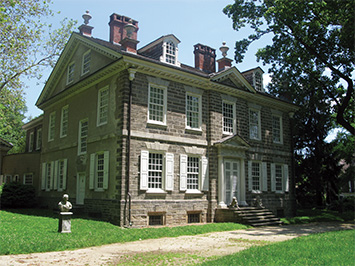 Cliveden was built in 1767 as the summer home of Benjamin Chew, a prominent Philadelphian and plantation owner in the mid-­Atlantic region. On October 4, 1777, the Battle of Germantown forever changed the site when British troops barricaded themselves inside the mansion’s thick stone walls. Although American efforts to storm the house and overtake the British were unsuccessful, their valiant effort was influential in securing French support for the American cause. Musket holes in the walls, haunting tales of dying soldiers, and yearly reenactments of the battle since 1877 secured Cliveden’s place in American memory.

Successive generations of Chew’s descendants owned the house until 1972, when they donated it to the National Trust for Historic Preservation. It was opened to the public, with interpretation that primarily focused on the battle, the building’s stunning Georgian architecture, and the furniture inside. By this time the neighborhood outside Cliveden’s walls had also dramatically changed. Once a pastoral retreat where members of the colonial elite moved to escape the ills of city life, the area became an urban neighborhood, now home to a sizable African American population. And like neighborhoods in many American cities, Germantown faced increasingly difficult social and economic conditions beginning in the 1970s. Cliveden began to look more and more like an island, separated from the physical and social fabric of the urban neighborhood that grew up around it.

In 2003, Cliveden’s director, David Young, began a long-­term effort to reevaluate the site’s mission and interpretive plan. As part of this process, Cliveden’s staff made a concerted effort to work with residents in the neighborhood through an ongoing series of outreach events, called “Cliveden Conversations,” designed to get participants’ insights on what the site could and should mean going forward. While the dialogue continues, the efforts culminated in the launch of a new exhibit and program of interpretation in July 2012. In addition to the architecture and battle, the plan elucidates, rather than obscures, the slaves, servants, and laborers who made this place function on a daily basis and solidified the economic fortunes of the Chew family. By building relationships outside its walls, Cliveden began a new era in its history as a historic site. Yet elements of its former self lingered. 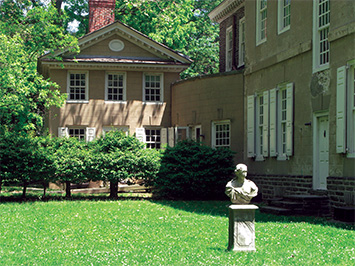 One deeply rooted item was Cliveden’s National Historic Landmark nomination, the form used to explain why the site is nationally significant according to NPS criteria. Cliveden’s was dated between 1961 and 1966 and focused entirely on Chew’s house and the battle. It also lacked the depth the NPS now requires for new properties, as well as the broader historical meanings Cliveden’s staff and its stakeholders in the community now understood as part of the site’s significance.

As a group of graduate students with a desire to extend our historical practice outside the familiar bounds of the classroom, we viewed the chance to partner with Cliveden and the NPS as an opportunity worth pursuing. Together, we applied for a grant through the graduate school’s Arts of Citizenship program with a letter of commitment from Cliveden, which enabled us to begin the project. Since the site’s historical meaning as a landmark, like other forms of historical knowledge, had changed significantly, our challenge in partnering with multiple organizations was to balance the needs of the NPS and Cliveden by using our expertise to fit these fluid and contested meanings into the administrative format of the nomination. The result would be a public record of the site that more accurately reflected a complex and rigorous engagement with the site’s full history.

Yet the process of working with the NPS to write a nomination—­similar to writing a scholarly article for a public audience—­doesn’t necessarily mesh with the way Cliveden’s staff have been striving to recognize that the “period of significance” is not only past, but also present. To help address this issue and make the revised NHL nomination a part of Cliveden’s ongoing dialogue with its various publics, the site sponsored one of their “Cliveden Conversations” with the theme “Do National Historic Landmarks Represent Our Historic Values?” 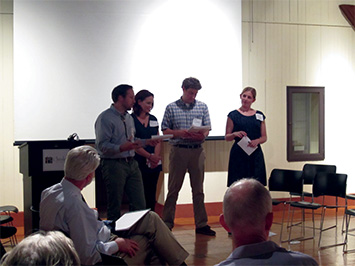 The topics of discussion varied widely, but perhaps the most important thing we learned from the experience was that there remained a strong desire among audience members for us to recognize that for many, the house was not about the memory of Chew, Georgian architecture, or the Battle of Germantown. Rather, it represented a more unsettling history of slavery and servitude in the United States.

Surprisingly, the insights gained from the public forum meshed well with the NPS, who also questioned whether Chew was a “nationally significant” figure. Rather, their historians suggested the site fit under their criterion that emphasizes broad patterns and events in American history, rather than one that focuses on individuals. It remained, however, an exemplary model of Georgian architecture, which, along with the battle, would need to be addressed in the nomination.

To bring the nomination in line with the goals of both the NPS and Cliveden, we looked more broadly at Cliveden’s past apart from the Battle of Germantown. While the battle remains an important focus, it is now framed as but one contributing factor to the site’s significance. Driven by Cliveden’s desire to represent a more complex narrative about the site’s past, our research for the revised nomination draft argued that the site is also significant as a window into late-­18th-­century domestic life, slavery, and servitude in the North. In this light, the nomination recognizes multiple factors and relationships between people that contributed to the site’s overall significance.

One way we were able to negotiate the important elements the NPS and Cliveden wanted to see included in the nomination was by examining interactions between space, place, and people at the site. Rather than completely separating architectural history from social history, as the format encourages, the revised nomination more clearly reveals links between the two that had always been present. For example, Cliveden’s “hidden” servant staircase permitted laborers to travel between all floors of the house without entering public spaces unless requested. An examination of such architectural features allowed us to illuminate how Georgian architecture, slavery, and 18th-­century social life were intimately connected, and contributed to a more accurate understanding of Cliveden’s significance as a place.

Additionally, while the period of significance in the nomination could not extend to the present, we were able to agree upon an extended period, between 1763 and 1825. This time frame allowed us to incorporate Pennsylvania’s gradual emancipation law, as well as the story of how Chew circumvented them by moving his slaves between Cliveden and his other properties.

As one piece of our overall graduate training, the experience enriched our education by allowing us to engage with the process of creating history through the perspectives of different organizations and individuals who have a stake in how, and why, these stories are told. As partners with these groups and people, we came to realize that the merit of reevaluating Cliveden’s historical significance, and the potential for similar projects at other sites, is not only about the final product. Rather, the value of these endeavors for students, teachers, community partners, and the discipline of history lies as well in our willingness to create processes that bring together a variety of participants to inform and transform the ways we practice history and understand the past.

—Joseph Cialdella is a PhD candidate in the Department of American Culture at the University of Michigan.