In April of this year, I attended the Cain Conference on Chemistry and Global History in Philadelphia. As a historian of 20th-century Paraguay, I presented a paper that I am currently coauthoring with Timothy Yang, who studies the history of the pharmaceutical industry in Japan. Ours was one of only two coauthored papers at the conference out of almost 30 papers presented. As I expected, many members of the audience asked important and probing questions about our research on stevia (a plant native to Paraguay). However, after the presentation a few observers approached me to ask about something I hadn’t anticipated: the experience of coauthoring.

Oddly enough, I have become something of an “expert” on coauthorship as I have coauthored five articles or book chapters. As I have come to realize, this is a rather peculiar experience for a historian. We are not trained in our graduate programs to coauthor projects. History theses and dissertations are always solo ventures; and while our papers often include extensive acknowledgments sections, rarely do historians collaborate as often as we could or should. This needs to be reevaluated. Historians, particularly those concerned with global history, need to view collaboration as an opportunity to strengthen our scholarship. Such efforts are a way of avoiding the constraints often brought on by graduate training. The question of coauthorship posed to me in Philadelphia has forced me to think about why this process worked so well for me, and it has raised my hope that more historians will engage with one another in this manner. 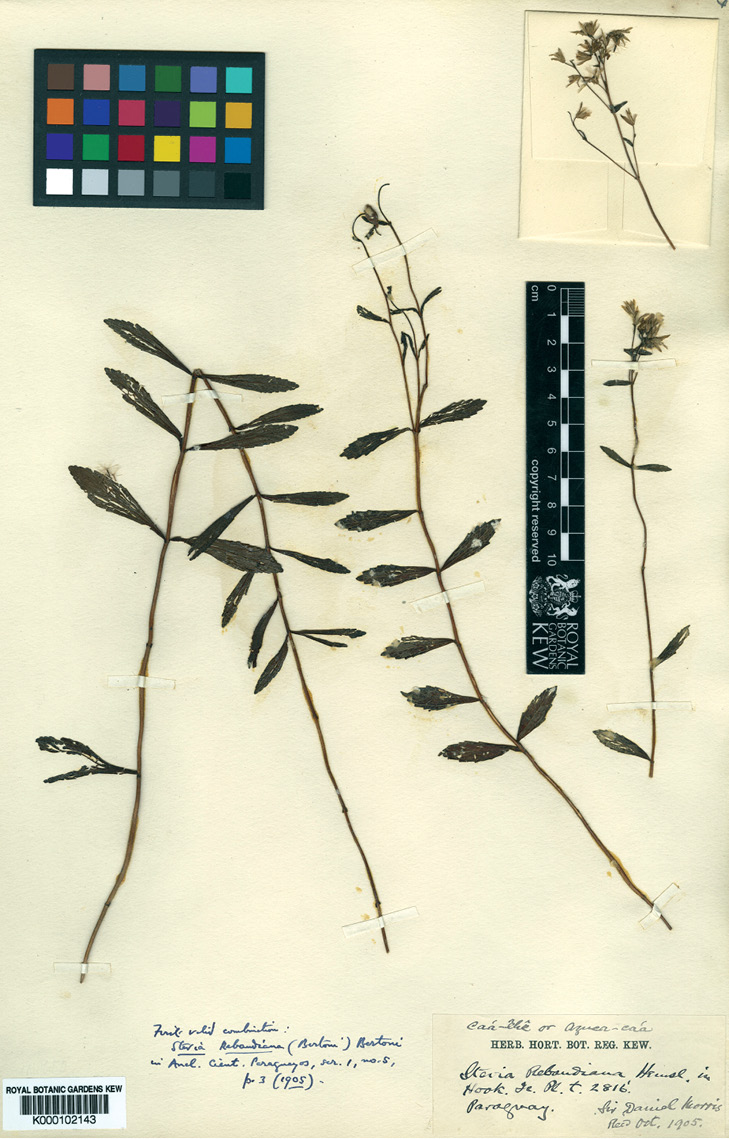 Image of the ka’a he’e plant native to Paraguay. Meaning “the sweet herb” in the Guaraní language, the plant’s latinized name is Stevia rebaudiana bertoni. It is one of over 300 species of stevia in the world, and the only one that contains a zero-calorie sweetener.

In graduate school, we are informed that if we do not speak a language that we need for a project, we are obligated to learn it or find a new project. Once a PhD has been conferred, I suggest that we move beyond this limiting model. I do not read, write, or speak Russian, German, or Japanese—the languages of my coauthors. Most likely, I never will. In addition, and perhaps more importantly, my coauthors have always provided our work with a broader historiographic perspective. But coauthorship should be about more than just language barriers and historiographic knowledge. It also needs to be about expanding our knowledge and understanding of archives and resources, engaging in the reality of disciplinary interconnectedness, and the potential for extending exciting contributions in one of the growing trends in the field: global history.

In the spring of 2011, I attended the Duke Latin American Labor History Conference, where I presented on Juan Belaieff, a White Russian hired by the Paraguayan military before the Chaco War (1932–1935). The questions audience members asked revolved around one question: how did I know that the biographical material, a Spanish-language secondhand account of Belaieff’s military and scientific experiences in Russia, was trustworthy? My honest response was, I didn’t. I needed someone who could search out primary material in Russian archives to confirm my sources and add depth and rigor to the narrative if I ever hoped to have the article published. I needed a historian who knew both the Russian language and Russian archives. The same problem arose when I researched Carlos Frebrig—a German naturalist who founded the Botanical Gardens in Asunción and left Paraguay to return to Germany in 1936. My latest efforts have demanded someone who could find Japanese-language historical and scientific sources on stevia and interpret them. While it was language barriers that prompted me to work with others, I have found that this is only one of many reasons to work collaboratively.

Having access to broader historiographic knowledge is another reason to work collaboratively. Once I located a Russian historian, Anatoly Isaenko, he immediately informed me about Belaieff’s life before his arrival in Paraguay. Anatoly gave me valuable insight into Belaieff’s military and ethnographic work in the Russian empire and informed me of the growing nationalist Russian-language historiography about White Russians. I was shocked to learn how well-known Belaieff was in Russia. My sources in Paraguay had led me to believe he was largely forgotten in his homeland. Anatoly also knew how and where to locate primary material in Moscow. As we wrote and rewrote, we had disagreements over how to start the narrative, what biographical material to include (and exclude), and even the larger question of why Belaieff left Argentina for Paraguay, but we worked through them by respecting each other’s knowledge and sources.

Thilo Papacek, my German-language coauthor, has been fundamental in translating many of Frebrig’s writings. And Thilo’s larger understanding of mid-20th-century German science and his knowledge of Bolivian sources has given the text a richness I alone would have never achieved. Thilo was tasked with the difficult chore of explaining to me that our subject was not a die-hard Nazi even though he survived and worked for the Third Reich after leaving Paraguay in 1936 through the end of World War II. My knowledge of Paraguayan history combined with Thilo’s mastery of the archives in Berlin and Bolivia will result in a successful chapter in a book I am currently editing on the Chaco War.

Another coauthor, Tim Yang, whom I mentioned at the beginning of this article, has located Japanese-language scientific sources on the stevia plant. These sources have shown me that original oral testimonies given to me in August 2013 in Paraguay about how the stevia plant arrived in Asia were wrong. My Paraguayan sources believed that the Japanese had acquired (or stolen) the plant in the 1940s; Japanese sources clearly demonstrate that stevia did not arrive in the archipelago until the late 1960s.

Collaborating with these historians has made our work global. Before working with Anatoly and Thilo, I did not understand the mind-set of Belaieff and Frebrig before their respective arrivals in Paraguay, nor could I have done so without my colleagues’ insights and frames of reference. Limited to English- and/or Spanish-language sources, I never could have fully comprehended how well prepared these men were for the work they did when they arrived in South America. Significantly, Anatoly and Thilo have proven to me repeatedly that Paraguay was not isolated from outside ideas and influences (as much of the historiography of the landlocked country would have one believe). Working with Tim, I have come to understand the complexities of researching and writing about global history. Before I met Tim, I had access to English, Spanish, and French sources on the stevia plant, but I could not see the larger Asian component of the history (although I suspected it). Europe, Latin America, the United States, and Asia were all sites of knowledge about the supersweet plant.

My other two coauthors have been Carlos Gómez Florentín and Thomas Whigham, both Paraguayan historians. Working with Carlos and Thom has taught me a great deal about Paraguayan politics, new places to look for sources, and historiography. Quite simply, my efforts with both have challenged me to consider new concepts and rethink old ideas about the country that I thought I knew so much about. I have learned a tremendous amount from Carlos and Thom, and I am grateful for their tutelage.

All of my collaborative projects with Paraguayan and non-Paraguayan historians have been both fruitful and enjoyable. Research and writing with Carlos and Thom reminds me how much more I have to learn about Paraguay. Working with Anatoly, Thilo, and Tim has reminded me how interconnected the world was and is. Science, technology, and knowledge have rarely respected national borders. People often don’t speak or write in the languages I want them to, or conform to cultural norms I understand. More often, historical sources are found in disparate locales. These realities often limit our choice of topics or serve as roadblocks, but they shouldn’t. My coauthors have challenged me to expand the way I think about both Paraguay and the world. I have moved beyond my PhD limitations. All of these experiences of coauthorship have shown me that it is possible to write nuanced, accurate, and compelling history that no one historian could have accomplished alone.