Looking at the stately US Capitol from afar, it’s hard to imagine that its origins are as divisive and contradictory as the congressional debates that can take place within its rooms. The building appears, so often in film and television these days, as a stand-in for the capital city—enduring, multifaceted, and unchanging. But a closer view reveals that it’s been changing a good deal—the dome is decaying, flaking, leaking, cracking, and coming ever closer to releasing bits of its fine cast-iron ornamentation onto visitors below. When the next president is inaugurated in Washington in 2017, if all goes according to plan, a new fully restored Capitol dome will be unveiled.

The restoration of the dome will cost about $60 million (the overall restoration of the Capitol is estimated at about $127 million); the principal work, begun this past fall, will take place over two years. Supervised by the architect of the Capitol, Stephen T. Ayers, whose office has already completed several years of planning and preparation, the work is ready to move into the next phase. 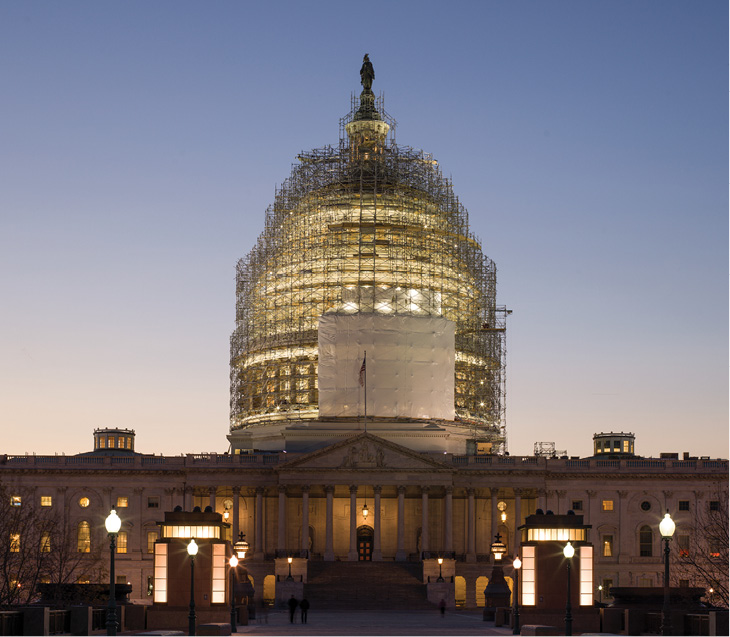 Scaffolding has been completed around the dome of the US Capitol to provide access to the surface and enclose the areas during lead paint abatement.

From the outside, visitors can now see the 52 miles of eye-catching scaffolding, installed from the bottom, or dome skirt, to the base of the Statue of Freedom, which sits atop the dome’s cupola. Inside, what has been described as a doughnut-shaped canopy protects the interior artwork and visitors from falling debris. The interior and exterior scaffolding and a large staging area on the west plaza, with walkways directly to the dome, will allow the Capitol to remain open for congressional business (and tourists); Constantino Brumidi’s 1866 fresco, The Apotheosis of Washington, on the interior will remain visible. 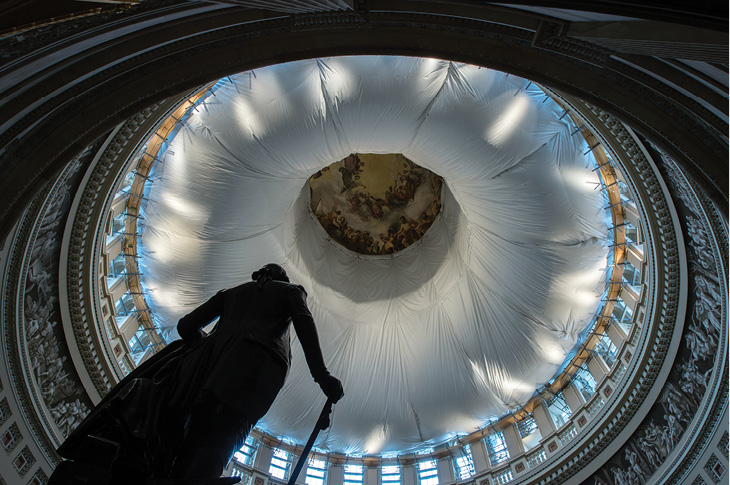 A circular structure made of rope and fabric protects the interior ornamentation and visitors while allowing a view of the frescos through the oculus.

Even before the cornerstone was laid in 1793, the design and construction of the US Capitol had been characterized by glacial progress, mismanagement, and cost overruns—missteps perhaps understandable given that the young Republic had had no history of monumental building. The dome we know today is a later addition to the third iteration of the Capitol building, which had been burned in 1812, rebuilt with a wood and copper dome, and then rebuilt and enlarged again, in the mid-19th century. Construction for a new, larger cast-iron dome, designed by Thomas U. Walter, was begun in 1856 and finished in 1866. In all, including the 38-foot-tall bronze Statue of Freedom, the new dome weighed nearly 9 million pounds; at 288 feet from the ground plane of the East Front Plaza, it is purported to be the largest cast-iron dome in world.

The last major restoration of the dome, in 1959 and 1960, is remembered by many Washingtonians for the bright red tint of the primer, which gave the building a peculiar cast. That restoration, now well over 50 years old, was concerned more with repainting and connection repairs than restoring the cast-iron substructure, which is now leaking water into the dome interior and damaging it. Today, the architect of the Capitol has identified over a thousand cracks and abrasions in the cast-iron shell that will need to be repaired, and many of the dome’s 108 original green lead-glass windows will need to be repaired or replaced as well. 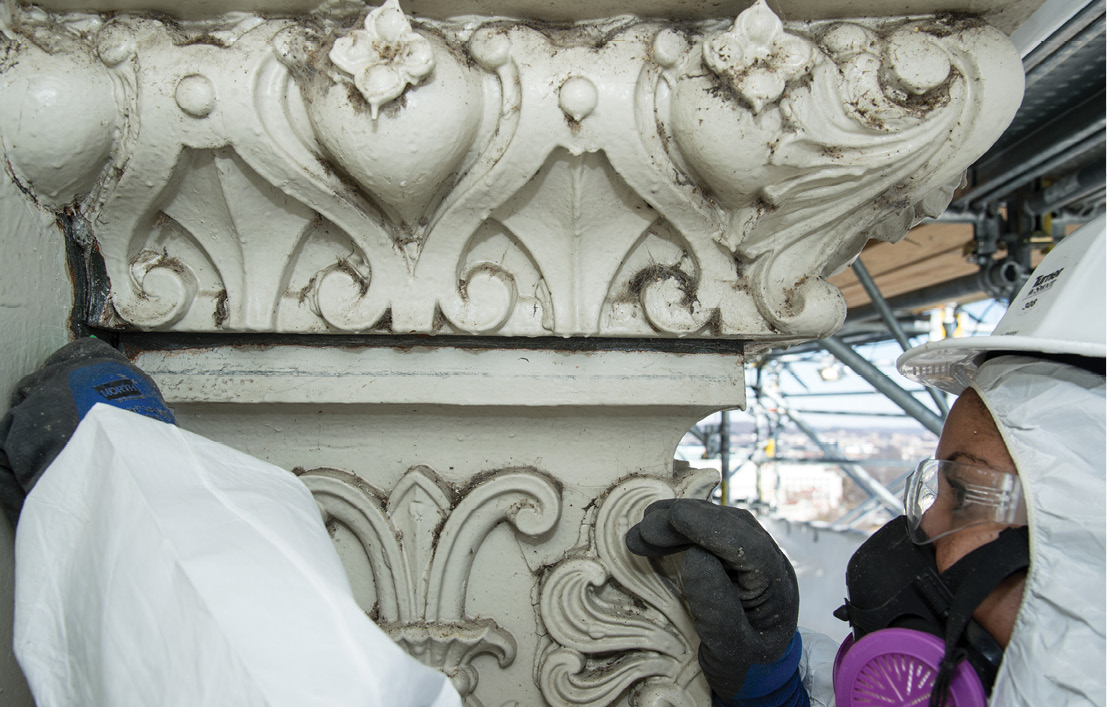 The meticulous work of making nearly 1,300 repairs in the cast iron dome must be done by hand.

The main work on the dome begins with the blasting and scraping off of paint, followed by the application of primer, repairs to the cast iron, and several finishing coats of paint. Although the restoration process is similar to that of any 19th-century cast-iron structure, the scale of the dome and the delicacy of the materials, as well as the significance of the interior decoration, are what makes this restoration a highly orchestrated endeavor.

According to the Washington Post, which has published an interactive guide to the restoration process, the existing 10 layers of lead paint must be stripped and the raw cast iron primed within eight hours to protect against flash rusting; thus it must be done in sections rather than in successive stages. Repairs to the nearly 1,300 cracks, erosions, and fissures in the cast-iron structure will be filled using a highly labor-intensive lock-stitch technique, because the original cast iron will not tolerate the heating and cooling of welding. Repairs and replacements to the dome’s cast-iron ornaments, which include 72 decorative acorns and 36 grape clusters, will require that each element be carefully examined and documented before being repaired and replaced in the original settings, and with the original fixtures, if possible. New ornaments, if needed, will be recast at a foundry in Utah, from new molds.

What’s astonishing about the restoration process is that, for all its massive logistics and cutting-edge materials, the most sensitive work is very much in the hands of skilled craftspeople. Many of the materials and techniques used—the rope and fabric of the inner dome’s doughnut scaffolding, the hand-casting of the ornaments and their molds, the scraping of paint by hand—would not be unrecognizable to the dome’s original builders. If lead paint abatement and tourist-friendly scaffolding are clearly 21st-century accommodations, the Capitol dome restoration still provides the public with an opportunity to appreciate the 19th-century art and craft of building.

Jennifer Reut is a historian of American architecture and landscape. A former editor at Perspectives on History, she is currently an associate editor at Landscape Architecture Magazine.