Trade Secrets: Presenting the March Issue of Perspectives on History

An open file cabinet graces the cover of this month’s Perspectives on History. As an illustration for our cover story—a brief for the power of academic administration to further knowledge production—it’s apt enough. As Peter N. Miller asserts in “Argument by Other Means,” we don’t need to perceive administration as malevolent bureaucracy; the files of many individual administrators attest to efforts to protect academic infrastructure, knit together international networks of scholars, even rescue endangered resources (as when Fritz Saxl helped move the Warburg Institute from Germany to Britain in the 1930s). Administrators’ archives offer clues to the history of knowledge, writes Miller. Why do historians decline to seek them out? 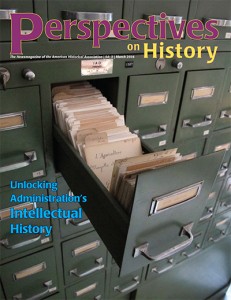 Erika Vause provides another “opener” of sorts, writing frankly about what it takes to overcome shyness or introversion as a teacher. “Beyond First-Day Jitters” addresses one of the open secrets of the profession: many people endure discomfort in front of classes because dealing intensely with people can be exhausting (a problem introverts face) or can produce inhibiting anxiety (as shy people experience). Vause not only presents her own story transitioning from a green graduate student instructor to an assistant professor with a high teaching load, she also observes that contemporary pedagogy might provide a way for the shy and introverted to hone their craft—and even come to relish teaching, as she does.

Our News section this month also looks at hidden or marginalized aspects of history. AHA program assistant Elizabeth Elliott reports on the recently discovered identity of the first African American millionaire, a 19th-century Wall Street trader named Jeremiah Hamilton—a man so shrouded in mystery that no photographs of him exist today. Meanwhile, associate editor Kritika Agarwal explains what’s behind “queer migrations”—a theme so prominent at Atlanta’s annual meeting back in January that Perspectives decided to dig deeper. Do interpretations of migration presume a heterosexual migrant? Some scholars today say yes, and we think you’ll be surprised by their alternative interpretations of a subject very much in the headlines today.

It might not come as a shock, however, that Perspectives staff members are obsessed with podcasts; since last year’s Serial catapulted the medium into public consciousness, history podcasts have blossomed. In “History on the Download,” editorial assistant Sadie Bergen talks to the creators of several of our favorites and one professor who’s taught students to make their own.

If history careers seem mysterious, take inspiration from Karen Marguerite Wilson-Ama’Echefu, who sees her path toward her current position in the music department at Nigeria’s University of Calabar as beginning in her Harlem childhood. Absorbing her parents’ appetite for knowledge, she became a participant-observer of her own culture, which ultimately influenced her artistic achievements and the work she did for her history PhD. Continuing on the subject of careers for history PhDs, AHA manager of academic affairs Emily Swafford recounts the events of “High-Stakes History,” a conference sponsored by History in Action, of Columbia University. History in Action is a project of the AHA’s Career Diversity for Historians initiative, and the conference reflected the energy of PhD students curious about a multitude of careers, from academia to publishing to public health and beyond.

This past month has been a productive one for the AHA in other ways. In the March Perspectives you’ll find out about the Association’s advocacy on behalf of Turkish scholars and to preserve precious resources in the history of textiles. You can also read the AHA’s best practices statement on dual enrollment/concurrent enrollment, an issue that’s increasingly important for historians in higher education and K–12 teachers. (For background on DE/CE, see the September 2015 issue of Perspectives.)

There’s much more in this month’s issue. Take a look and let us know what you think at perspectives@historians.org.