The Work of Historians: Lessons on Networking, Stories, and Perished Parrots at Columbia

“Now that’s what I call a dead parrot!” exclaims an exasperated John Cleese, demanding a refund for the purchase of the deceased bird from a shady pet shop owner, played by Michael Palin. In a sketch familiar to fans of Monty Python’s Flying Circus, Cleese engages in ever more exaggerated antics to make his point: “This is a late parrot.” But according to Harvard University’s Jill Lepore, the quip also speaks to the power of the stories we tell as historians and the importance of the work we do. Whether a dead parrot is just a dead parrot or signifies something more, it is the story we tell that makes the difference.

As the keynote speaker at January’s “High-Stakes History: The Many Conversations of History,” sponsored by graduate students at Columbia University, Lepore drew on her experience writing for the New Yorker and on other public-facing history to engage the audience in a discussion of the power of narrative. This theme ran through many of the panels that followed, as conversations explored the variety of careers trained historians enjoy and what it means to engage in historical work.

A project of History in Action (one of the four AHA Career Diversity for Historians pilot programs), “High-Stakes History” attracted more than 160 attendees, including graduate students from more than 20 colleges and universities in the region. The two-day conference was organized by Columbia history graduate students Caroline Marris and Jake Purcell, with support from faculty directors Rebecca Kobrin and Karl Jacoby. 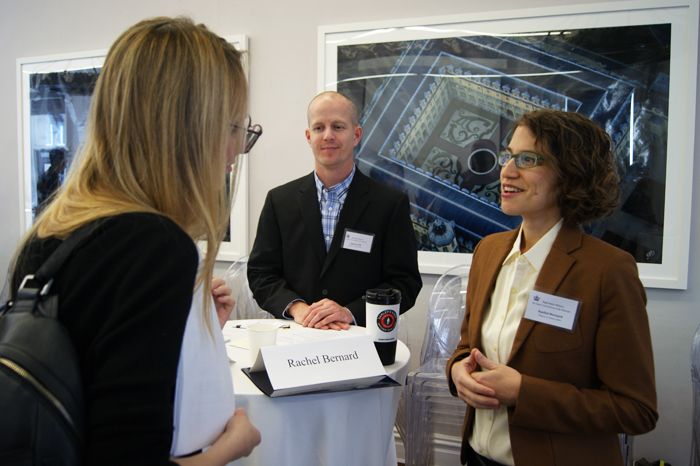 The conference kicked off with a networking and informational event, bringing graduate students together with professionals representing careers in publishing, museums, archives, businesses, and nonprofits, working in locations from New York to Washington, DC. Over coffee and bagels, attendees chatted animatedly about career paths and choices, demonstrating graduate students’ thirst for knowledge about work life beyond the academy, not to mention the eagerness of historians in a variety of industries to share their experiences. The event reaffirmed a central impulse behind Career Diversity: building a community of historians who work beyond the professoriate. Their enthusiasm to mentor the next generation of historians is seemingly unflagging, and the dozens of historians registered with AHA Career Contacts, a Career Diversity service that arranges low-stakes informational interviews, only reinforce this spirit.

The “High-Stakes History” panels placed historians and history in broad professional and cultural contexts, from politics and activism to pop history and entertainment. Some panels featured history PhDs working at the intersection of history and other disciplines, while others showcased employment outside the academy. Still others included nonhistorians commenting on the role history and historians play in their work. For example, Merlin Chowkwanyun, from Columbia’s Mailman School of Public Health, spoke about how his team’s efforts in public health use history. The team is compiling a database of “toxic documents”—corporate records drawn from publicly available lawsuits detailing the health hazards of tobacco and other harmful substances. Like many historians working with digital versions of historical documents, Chowkwanyun also struggled with making the text legible and creating usable metadata. Historian Edda Fields-Black described her collaboration with artists in composing The Requiem for Rice as well as how it grew out of her scholarly work and family history. Television producer Mellissa Betts offered another highlight by analyzing her work on the show Who Do You Think You Are? Other panels presented ongoing work at the Brooklyn Historical Society, the Institute for Policy Studies, the International Coalition of Sites of Conscience, and Slate. (A full list of speakers can be found on the History in Action website.

“High-Stakes History” also revealed that Columbia graduate students are already redefining historical work, as recipients of History in Action Project Awards (HAPA) and History in Action Research Awards (HARA). An innovative feature of History in Action, HAPA and HARA grants are funded in part by reallocating graduate assistantships to internships or research projects that engage with Career Diversity’s “five skills”: communication, collaboration, quantitative literacy, intellectual self-confidence, and digital engagement. Columbia’s Maria John described her collaborative work in developing K–12 local history curricula with nearby schools as part of the South El Monte Arts Posse, whose previous projects include the award-­winning "East of East: Mapping Community Narratives." Brianna Nofil presented on co-writing (with conference organizer Jake Purcell) a piece for the online magazine Atlas Obscura about medieval buildings transplanted, sometimes illegally, from Europe to the United States in the early 20th century. Columbia students have also done work at the Brooklyn Historical Society, the Mayor’s Office of Immigrant Affairs, and the Columbia Rare Book and Manuscript Library, to name a few. 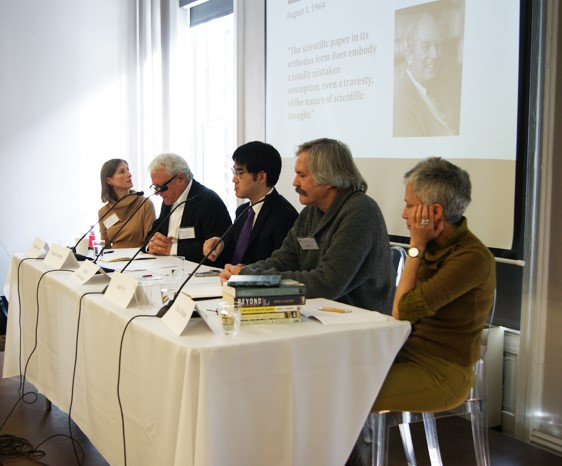 Two sessions highlighted the AHA’s role in driving the conversation about the purpose of a doctoral education in history. At a lunch roundtable, representatives from the four Career Diversity pilot programs reported on their activities and achievements, without ignoring ongoing challenges. Their efforts to build community within and beyond their departments often include organizing low-stakes interactions, such as the history hikes popular at UCLA, or drop-in office hours and graduate student workshops.

Kicking off day two, representatives of the AHA and the Modern Language Association (whose Connected Academics project parallels Career Diversity) addressed several critical issues, including what’s at stake when humanists are absent from the “working world” and when the issues of the “working world” are absent from graduate education. The two graduate student panelists also highlighted connections between their intellectual interests and their participation in History in Action and Connected Academics.

But what does any of this have to do with Monty Python and a dead parrot? It all comes back to a story. In her keynote, Lepore spoke about writing in the New Yorker about fears of a parrot fever pandemic that gripped the United States in the early 20th century. The scare—and scientists’ response—led to the establishment of the National Institutes of Health. In similar fashion, because Lepore researched and wrote her article during the “swine flu” outbreak a few years ago, the article was assigned reading for the workers at the Centers for Disease Control as an example of the unintended consequences—in this case, a wave of parrot killings—that can accompany mass panic over disease.

The power of stories, of narrative, emerged as a central theme of the conference, especially the relationship between history and storytelling and the power of narrative to convey information and mobilize communities. This is an easy task for historians to embrace. It’s easy to see the appeal of making good historical dramas, of helping communities work through troubled pasts, or preserving artifacts of subaltern stories that might be lost. All of this is important work and, one could argue, innately interesting to anyone who chooses to complete graduate work in history.

Written between the lines of this work lies another challenge, one that is tempting to overlook in our excitement about sharing our knowledge of the past: how to validate the work of historians that doesn’t look like history, that might not relate to dissertation topics, or lead to book projects or even articles in the New Yorker. It’s the importance of the historian in the boardroom, the historian writing forward-thinking policy, the historian working outside her subject area of expertise, that is sometimes harder to see. It’s a challenge that lies at the heart of Career Diversity and that we share with fellow humanists: how to make the ineffable effects of deep intellectual inquiry tangible and visible to a working world that is not necessarily primed to see them.

Emily Swafford is manager of academic affairs at the AHA.

More information on History in Action at Columbia can be found at http://historyinaction.columbia.edu. For additional resources, including videos of the keynote and panels from “High-Stakes History,” see the Career Diversity for Historians web page at historians.org/careerdiversity.