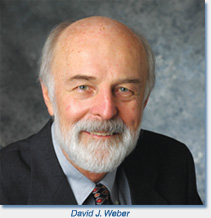 David J. Weber, one of the leading scholars of the U.S. Southwest and Mexico, died August 20, 2010, of complications related to multiple myeloma. He was 69. Weber was the Robert and Nancy Dedman Chair in History at Southern Methodist University (SMU) and at the time of his death was serving as the vice president of the Professional Division of the American Historical Association.

While in graduate school at New Mexico, Weber was drawn to the Spanish borderlands by Donald Cutter, the university’s borderlands historian. Trained in both Latin American and United States history, Weber would spend his career working at their intersection, ultimately writing or editing some 27 books and 70 articles. As he wrote in 1999, “if there is any thread that runs through [my] work, it might be that I like to take what is familiar and make it strange: to put westering Anglo American trappers in northern Mexico instead of the American West; to find Mexican Americans in the history of the ‘American’ Southwest; to tie the ‘American’ Southwest into Mexican history, to make the Spanish frontier in North America harder for American historians to ignore; to connect the borderlands, which Latin American historians have dismissed as a part of U.S. history, with other peripheral areas of Spanish America.”

His dissertation, published as The Taos Trappers: The Fur Trade in the Far Southwest, 1540–1846 (New Mexico, 1971), examined early Anglo-Americans who came into New Mexico. The empirical and thematic scope of his work expanded considerably in the early 1970s, which Weber credited to his colleagues at San Diego State, his experiences living in Southern California and in Costa Rica on a Fulbright, and his Latino students (who he later wrote “forced me to think about why borderlands history ended in 1821”). In 1973, the University of New Mexico published Foreigners in Their Native Land: Historical Roots of the Mexican Americans, which became a foundational work in the burgeoning field of Mexican American history and is still in print and widely used in classrooms. The Mexican Frontier, 1821–46:  The American Southwest Under Mexico (New Mexico, 1983) treated the region as a cohesive unit in the context of Mexican history, rather than as separate state histories within U.S. history.

Weber’s final two major books reflected the continued expansion of his interests and helped to secure the integration of borderlands history into the larger study of the colonial Americas as a whole. In The Spanish Frontier in North America (Yale University Press, 1992), he offered a synthetic account of the colonial period, including both the contemporary U.S. Southwest but also present-day Florida and Louisiana, that he hoped would prompt “American historians [to] take the borderlands more seriously.” In Bárbaros: Spanish and Their Savages in The Age of Enlightenment (Yale University Press, 2005), Weber placed developments in late northern New Spain in the broader empire-wide context of Spanish encounters with independent Indians peoples in the late 18th and early 19th centuries, a period in which Latin Americanists generally cease to think about such encounters. The Spanish Frontier and Bárbaros were both History Book Club Selections.

Particularly later in his career, Weber’s work attracted widespread honors and recognition. Two governments gave Weber the highest honor they can bestow on foreigners: in 2002 King Juan Carlos of Spain named him to membership in the Real Orden de Isabel la Católica, the Spanish equivalent of a knighthood, and in 2005 Mexico named him to the Orden Mexicana del Águila Azteca (the Order of the Aztec Eagle). He was one of a few U.S. historians elected to the Mexican Academy of History. Honors in the United States included his 2007 induction into the American Academy of Arts and Sciences.

Weber held fellowships from the Huntington Library (Times Mirror Distinguished Fellow), American Philosophical Society, National Endowment for the Humanities, American Council of Learned Societies, the Center for Advanced Study in the Behavioral Sciences at Stanford, and the Lamar Center at Yale.

Weber was as generous to others as he was invested in his own work. He was widely known as a sympathetic critic and reader of manuscripts and a devoted and effective teacher. At SMU, he chaired the department of history from 1979 to 1986 and received the university’s Willis Tate Distinguished Teaching Award in 2010. After years of mentoring MA students, he played a key role in founding SMU’s history PhD program, which began admitting students in 1998, and the university’s William P. Clements Center for Southwest Studies, which opened its doors in 1996. Weber directed the Clements Center until 2010. The accomplishments of the students and postdoctoral fellows that he mentored were a source of great pride to him. In the profession at large, Weber was president of the Conference of U.S.-Mexico Historians (1990) and the Western History Association (1990–91), and served on the executive board of the Organization of American Historians and as the vice president of the Professional Division of the American Historical Association.

Weber is survived by his wife, Carol Bryant Weber, their two children, three grandchildren, three siblings, and the countless friends, students, and colleagues whose work and lives were touched by his presence.