What’s in the October AHR?

When members open the October issue of the American Historical Review, they will find two stand-alone articles—one on 18th-century France, the other on the early American republic—and a four-article AHR Forum on Japan in the early 20th century from a global perspective. There is also our usual extensive book review section, which includes seven featured reviews and 200 regular reviews. And “In Back Issues” calls attention to articles and features in the AHR from 100, 75, and 50 years ago.

In “Isolation and Economic Life in Eighteenth-Century France,” Emma Rothschild recovers the presence of long-distance connections in the interior of France in the 18th century by focusing on the economic lives of individuals in the provincial town of Angoulême. In particular, she looks at these people in the context of their transactions with the state and their relationships within families. The article explores exchanges within a group of merchants involved in a commercial crisis in 1769, and within the extended family and social network of the illiterate widow of a carpenter, Marie Aymard, whose husband had emigrated to the island of Grenada. Using the traditional sources of economic and social history, including notarial and parish records, Rothschild shows the multiple connections of individuals and families to overseas events. Methodologically, she draws on the microeconomics of development and social network visualizations to describe relationships of family, friendship, and spatial proximity. Her particular approach is to investigate the history of economic life from the inside out, illustrating the continuing influence of exchanges with the outside world in late-18th- and 19th-century families. A view from the interior, she suggests, shows that the reputed isolation of inland France was only apparent, for it was connected by multiple flows of information and economic interactions. From the perspective of families and households, the overseas ties and exchanges with provincial France were continuous over the latter part of the 18th and the early 19th century.

In the first decades of the United States, political songs served two key purposes: to divide and to unite. So asserts Kirsten E. Wood in “‘Join with Heart and Soul and Voice’: Music, Harmony, and Politics in the Early American Republic.” Indeed, the use of political song to stir up partisan passions is well known. Wood goes on to argue, however, that political song also had another, potentially more integrative function. Shaped by largely European ideas about music and harmony, the new republic’s political leaders at both the national and the local level used the notion of harmony and the practice of shared public singing as one way to explain how their vast country could hold together despite its many and fierce internal divisions. Drawing from natural philosophy and religion, Americans imagined that harmony both encompassed and resolved dissonance. The influence of sensibility, meanwhile, taught that sound, and especially music, had predictable effects on the body and mind. When Americans joined together to sing patriotic songs, they therefore had good reasons to imagine that they were experiencing and indeed building national harmony.

The four essays in the AHR Forum, “Early-Twentieth-Century Japan in a Global Context,” explore the nexus of the domestic and the international across a turbulent century of Japanese history whose drama played out on the global stage. In her introductory essay, “Japan’s New International History,” Louise Young looks at what the three main articles reveal about certain epochal moments—the years before and after the overthrow of the feudal regime in 1868, the aftermath of the Great War in 1920s Japan, and the height of the Asia-Pacific War in the 1940s—when the foreign and the domestic came together with sudden force to reshape the history of Japan and the world. She situates these essays within recent trends in the study of Japan abroad, suggesting that they exemplify the cultural, imperial, and transnational turns that have reshaped scholarship on modern Japan since the 1990s. The new international history calls for a consideration of the social agents of imperialism and the circulation of ideas across Japan’s national borders, as well as the study of colonial ideologies and how Japan became a site for the production of both Orientalism and Occidentalism.

The first of the Forum articles is “The Emergence of an International Humanitarian Organization in Japan: The Tokugawa Origins of the Japanese Red Cross,” by Sho Konishi. The history of the rise of humanitarianism commonly begins with the founding of the Red Cross in 1863. Given that by the early 20th century the Japanese Red Cross Society (JRCS) had become the largest national Red Cross society in the world, the global history of the rise of humanitarianism cannot be written without incorporating the JRCS. Unlike existing histories of global humanitarianism that attribute its rise to the development of evangelical Christianity, Enlightenment values, imperialism, and capitalism, this essay argues that the birth of the Japanese Red Cross owes much to the Tokugawa medical ethic and practice of jinjutsu, “the art of compassionate healing,” founded on the perceived universality of the principles of nature. Viewing humanitarianism as a truly global phenomenon with multiple intellectual sources and expressions, Konishi uncovers the medical origins of humanitarianism in Tokugawa Japan through an examination of the influential Juntendō Medical School in the town of Sakura. Juntendō graduates bridged the humanitarian ethic of Tokugawa physicians with that of the JRCS. Through its reading of Japanese non-imperial encounters with Dutch medicine, this essay reflects upon the notion of “universality” as it relates to conceptions of humanity and humanitarianism.

In “Toward a Global Perspective of the Great War: Japan and the Foundations of a Twentieth-Century World,” Frederick R. Dickinson proposes a new global perspective of the First World War. While his article is focused squarely upon developments in Japan between 1914 and 1930, it depicts those developments not, in the usual manner, as the foundation of a particular national pathology leading to the Second World War, but rather as reflective of larger global processes. Japan’s experience during and immediately following the 1914–1918 period accentuates the importance of the First World War in the shift from 19th-century conceptions of civilization to a 20th-century world: from elite to democratic politics, from national to increasingly multinational concerns, from unyielding faith in arms to arms control, and from brinksmanship to overtures for peace. Dickinson also highlights Japan’s pivotal role in the original establishment of these global norms. Finally, he highlights the importance of the First World War in spurring a long-term shift in the global center of gravity from Europe to Asia.

The Second World War in Asia is often portrayed as a grim showdown between the forces of Japanese imperialism and Asian nationalism. In “The Perils of Co-Prosperity: Takeda Rintarō, Occupied Southeast Asia, and the Seductions of Postcolonial Empire,” Ethan Mark asks us to reconsider this view. In fact, he suggests, for Japanese civilian propagandists “embedded” with the armies that occupied Southeast Asia, the war promised the very transcendence of this confrontation—and the “Western-model” imperialism and capitalism they blamed for it. Mark argues that Japan’s ambivalent positioning as a non-Western imperial power represented an intellectual double-edged sword, offering both a critical perspective on the global imperial-capitalist status quo and an unusually seductive illusion of something that might transcend it. Seen in broader global-historical terms, the experience of Japan’s imperial missionaries in Java highlights the ideological negotiations that accompanied the global transition from an order of empires to one of nation-states. Distinctly illuminating in this regard is the wartime trajectory of novelist Takeda Rintarō, whose move to occupied Java saw a shift from antifascism to an embrace of empire as mutual liberation. Takeda’s imperial exceptionalism, his identification with the colonized, and his resultant faith in the illusory possibility of occupation as liberation situate his experience at a pioneering position in the broader global history of imperial redefinition for a postcolonial world—and the accompanying ideological shift from colonial to postcolonial imperialism.

December’s issue will include two articles, one on indentured labor and human rights, the other on modern forms of “enchantment,” and an AHR Roundtable, “History Meets Biology.”

Yoshimura Jirō, “Hatsu hō sō” (“First Broadcast”). From “Meiji, Taishō, Shōwa ō emaki,”King7, no. 1, supplement (1931). Courtesy of Kyoto International Manga Museum. The early 20th century found Japan assuming a new role on the international stage. In “Toward a Global Perspective of the Great War: Japan and the Foundations of a Twentieth-Century World,” Frederick R. Dickinson looks at the years between 1914 and 1930. World War I brought dramatic changes to Asia, leading Japan’s civic and political leaders to view their country as a new agent of international events, at the forefront of a shift in the global balance of power. Dickinson views these changes through a social and cultural lens, seeing them as reflective of larger processes. “Backed by a rapidly industrializing economy, an urban middle class, and a mass consumer culture,” he writes, “Japan underwent a political transformation equivalent to the revolution of 1868.” His article is part of an AHR Forum on the intersection of domestic affairs and foreign relations in Japan’s “new cultural history.”

Meet the Editors and Staff of the American Historical Review 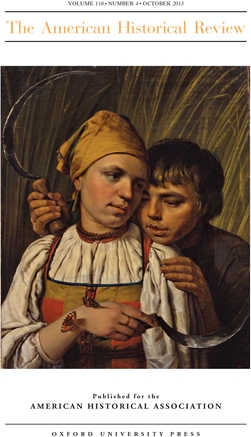 What do you want from the flagship journal of the American Historical Association? Editor Robert A. Schneider (Indiana Univ.) and the staff of the AHR invite members to attend an informal, open session to express their views on the journal. We are prepared to offer advice on how members might best prepare articles for submission and tell them what they should expect from the review process. Most importantly, we are eager to hear what you have to say. Please bring your brown-bag lunch and join us.