Trees in a Forest of Knowledge: From Page to Pixel in Manuel Lima's The Book of Trees

There are times when modern technology seems removed from the arts and letters. Take, for example, computer programming source codes. They might seem the most modern and original of languages. One does not need a degree in literature, or indeed any knowledge of the humanities at all, to write them.

But now comes Manual Lima, a celebrated graphics and visual designer for the tech industry and digital architect of how to map information, with a book on trees of knowledge to challenge tech enthusiasts’ claims to originality. Lima rightly points out that visual tree graphs have been central to organizing and analyzing information from the illuminated manuscripts of the early Middle Ages to “the statistical thinking of the nineteenth century and the dawn of computers (9).” Computer source codes, for example, are organized into trees, and trees of knowledge are visual models. What seems so modern, he shows, is in fact an ancient tradition of learning.

Lima’s argument is not only compelling, it is also convincing, for his visual evidence is powerful. The tree as a visual organizational metaphor was used in the ancient world to represent life and the power of gods, and examples can be drawn from ancient Mesopotamia, China, India, the Mediterranean world, and the early Mayan empires. In the Christian world, the tree of life evolved from a representation of earthly knowledge and celestial authority to the genealogy of Christ and kings in the 12th century. It would be applied to feudal hierarchies, the relations of virtues and affinities, the branches of medieval law, and historical chronology. Finally, by the 16th and 17th centuries, trees would organize the fields and typologies of early science. 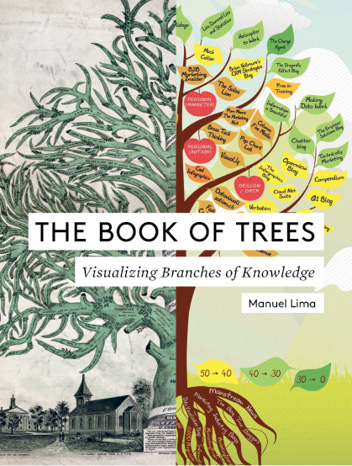 These trees had one thing in common: for the most part, they showed hierarchy, with the high branches representing celestial knowledge and the trunk and low branches representing various species and living examples closer to the dusty earth. This would also be the foundation of Linnaeus’s classification of taxonomies of orders, families, and genera, a key tool in modern zoology and biology.

Lima takes the reader on a visual journey through his forest of knowledge trees, from vertical and horizontal trees, which are the most familiar and include everything from Ephraim Chambers’s table of contents of his Cyclopedia (1728) to “WikiMindMaps” (2007). Lima includes radial trees of pedigrees, visual thesauruses, and data-heavy, graph-like “Species-Level Supertrees of Mammals” (2007). He also includes what he calls rectangular treemaps and Voronoi treemaps, which come from Cartesian visual schemas based on Euclidean definitions of special relations.

All this makes for fascinating perusing. Yet historians of science, while enjoying this book, will wince at Lima’s missed connections. Indeed, the history of the organization of knowledge is well known, and Lima has not researched it. He makes no mention of the encyclopedic tradition that produced Linnaeus or of other forms of organizing knowledge, such as theaters and memory palaces. These organizational metaphors were used along with trees in the 16th century not only to show knowledge, but to help memorize it. Humanist education was grounded in memorization. As Frances Yates famously showed, trees, series of connected spheres of related fields of knowledge, and memory palaces had rooms or drawers with general topics on them that could be used as mental files in the humanist art of memory.1

One could memorize the physical layout of the palace or cabinet and its various topical rooms or drawers. Lima’s rectangular treemaps look much more like theaters than they do like trees; visual designers and digital architects would benefit from knowing these models along with Lima’s trees, for knowledge was not just material—it was supposed to be visualized in the brain as well as on paper. This level of interaction demanded much more of the spectator and, also, of the visual model itself, for it had to help the reader better memorize and manage information.

There is also a problem in representing the continuum of trees from ancient virtues to modern codes. For humanist and Enlightenment philosophers and scientists, trees were not simply organizational; they were so firmly hierarchical that they became sites of disruption. When encyclopedist Meric Casaubon—an early collector and classifier of knowledge—drew out his “Synoptic Table for Generall Learning” around 1668, he sought to overturn the very hierarchy of trees. His tree of learning branched out into ever greater levels of incomprehension like “poor editions,” “needless pictures in books,” and “the inevitable decline from perfection, example: Descartes.”2 His idea was not to represent certainty, but rather the skeptical opposite. This same method of taking the celestial out of the branches of trees of knowledge and shaking up its leaves was central to Diderot and d’Alembert’s great Encyclopédie project (1751–72), in which they, like Casaubon, placed earthly knowledge and skepticism in place of religious authority. Their highest branches contained not divine learning but rather human history and “the knowledge of man.”3

Thus for all the virtues and pleasures of Lima’s book, it would have benefited from a tree of trees: a clear genealogy showing continuity, evolution, and breakage in the world of visual trees. This would have meant not only studying the trees visually, using a modern sense of resemblances, but also comparing the purposes trees played then and now. Ephraim Chambers’s tree gives us a hint of a possible difference. His tree was simply called a “table of contents,” but one organized according to a hierarchy.4In the French Encyclopédie, the tree of knowledge showed a new hierarchy of knowledge to help readers understand the alphabetical listings. Early trees were not simply data images unto themselves; they were guides through texts and gateways to books. 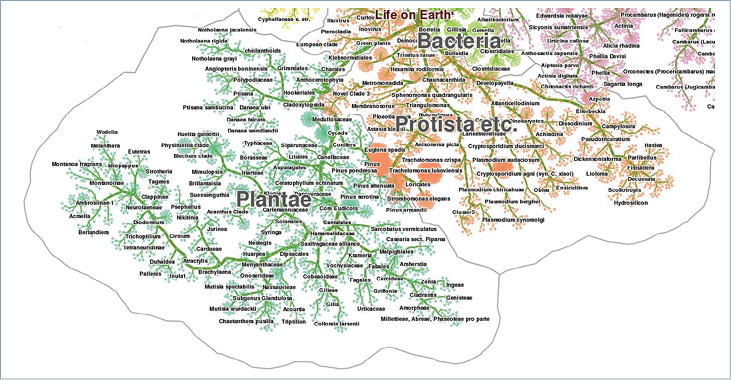 Lima’s modern trees are more graphs than hierarchical maps. Many are still Linnaean, showing the relationships between words and species, like Yifan Yu’s multidirectional “Tree of Life” (AT&T Labs–Research, 2011). But others, like Jean-Daniele Fekete’s “Treemap Visualization of the Linux Kernel 2.533” (2002), depict the relationships between various files. These are self-contained graphs of data in which space and size show the interactive elements of something as complex as the financial markets—more like maps than trees.

Traditional trees most often appeared as the prefaces or guides to books. Behind each category was a text, and this text was description, the real essence of scientific analysis.5 Lima’s book of trees dramatically shows the longevity of their usefulness as metaphorical visual tools for organizing and understanding knowledge. But in separating the trees from their corresponding texts, Lima extracts the tree from its original ecosystem: the book. Lima makes the important point that computing and graphics are part of an ancient textual tradition, and that digital architects would benefit from deeper understandings of history. Trees of knowledge need not necessarily be connected to paper, but the greatest ones grew out of books. This brings us back to the often contentious relationship that fascinates so many historians—that between books and computers. Lima has made a step toward understanding this relationship and shows that there is more work to do in the struggle between page and pixel. 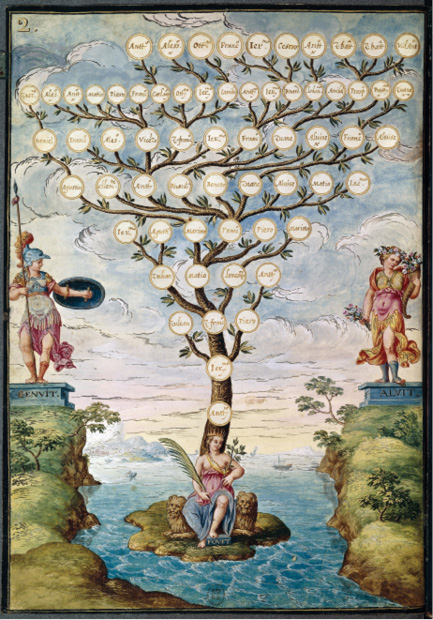 Jacob Soll is a professor of history and accounting at the University of Southern California and author of numerous books and articles, including The Information Master: Jean-Baptiste Colbert’s State Information System (2009) and The Reckoning: Financial Accountability and the Rise and Fall of Nations (2014).