Our War: American Reflections on the Civil War

“Being in the funeral business . . . You hear things that you should never acknowledge. You hold history in your hands. You watch history buried. And you realize that people depend on you to keep their true history alive. So when it’s your own story, you don’t want to hear it. Especially when you’re young. Especially when you’re trying to run away from what you are told is your family legacy.”—Isaac in Charles Randolph-Wright’s “Being Wright”

In Our War, which opened on October 24 at the Arena Stage in Washington, DC, 25 playwrights reflect on the Civil War and on history more generally through short monologues. Commissioned by the National Civil War Project, these monologues bring together scholarship and memory, and tie the past to the present through the theme of civil conflict. The monologues are divided into two groups of 18 monologues entitled “Stars” and “Stripes,” each set performed on a separate night.

In these monologues history is found in photographs that a character tries to sell, in a family name, in letters, and in memories. Other playwrights depict characters for whom the Civil War is the beginning of something that has not quite ended yet—the South is still fighting for its freedom (in the form of a fourth-grader who sues her teacher in “The Truth Revealed”); slavery is still practiced in the form of trafficking (in Heather Raffo’s “Times Have Changed”); and race still defines many Americans’ lives (in “Context” by Ken Narasaki and “Addressing” by Lydia Diamond).

The classroom is the setting of the first monologue. Playwright John Strand shares with us a 10-year-old student’s report on the Civil War, which she prefers to call “the War for Southern Independence.” The audience laughed at her statement that Abraham Lincoln was probably the worst president (she repeats several times that the cost of the war is the death of 618,222 people). She compares the northern states to bullies, and describes Senator Rand Paul as a great American to more audience laughter. But the piece raises important questions about history education in the US—how should American history be taught? Do students have a say in how they learn it? Is there a “truth” and should students stand up for it? And what is the role of government and the law in education?

For the black character in “Being Wright” by Charles Randolph-Wright, “Legacy can be a huge burden.” His family is proud of their ancestors’ choice to reject their former master’s name (Witherspoon) at the end of the Civil War: “Malcolm became X because he refused to be called by his master’s name—a slave name. My ancestors had their own form of resistance.” They took Witherspoon’s wife’s maiden name. Ricardo Frederick Evans gave a powerful performance of this monologue, explaining why they chose Wright as their last name, and showing how a triumphant family history can become the bane of a teenager’s existence when relatives repeatedly lecture him about it. 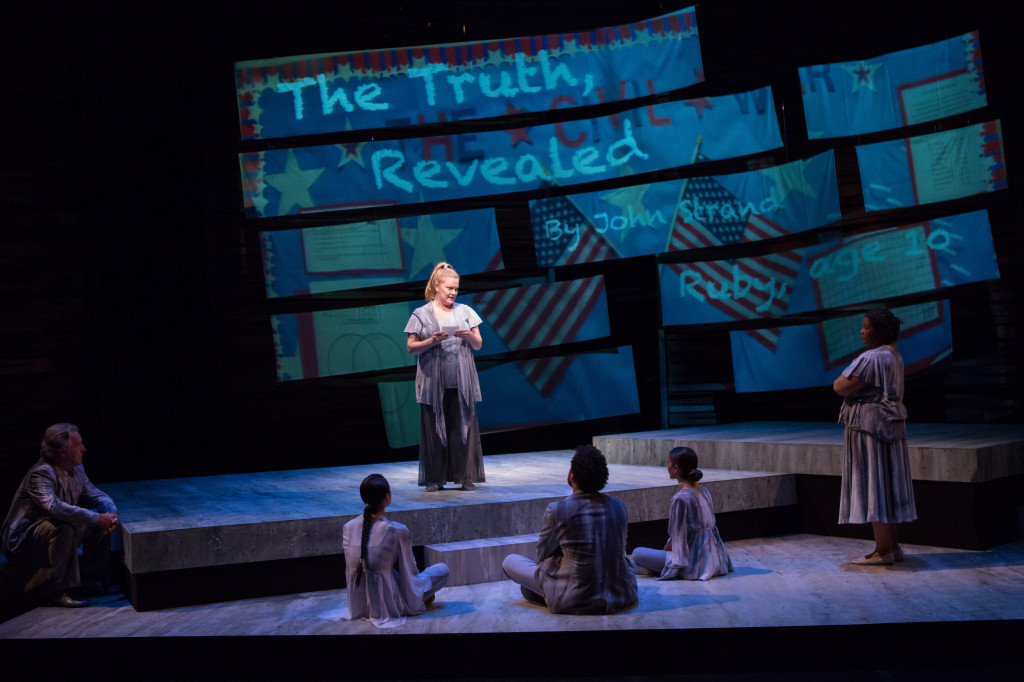 To an immigrant from India, the Civil War was a fight for the American dream—the same absurdly contradictory dream that still draws people from all over the world. “[B]ack in 1860, at the start of the Civil War, the top 10% of Americans owned 50% of America’s wealth, and how did they get so rich? By not paying for labor! I mean and they fought for their zero minimum wage workforce, they fought hard for that American dream! But yo, it’s all better now, because now, in 2013, the top 10% own only 86% of America’s wealth! . . . But see my point is that’s why we come here, right? That’s the crazy. That’s the American dream, that inequality! We want us some of that inequality!” Aditi Kapil’s character reflects on enlisting in the army as a path to citizenship, as does the character in María Agui Carter’s monologue “Fourteen Freight Trains,” the true story of Guatemalan José Gutierrez, who came to the United States on freight trains, then fought and died in the Iraq war before becoming a citizen of the US. In the monologue Gutierrez says, “President Lincoln recognized that if all men are created equal, like the Constitution said, then four million Africans should be free. But my African brothers and sisters, they taught me being free was not enough. They asked for citizenship.”

Supreme Court Justice Ruth Ginsberg, a guest performer on opening night, read the monologue “That Boy” by David Lindsay-Abaire. Set in 1864, the monologue is about Catherine, a mother whose son was so stubborn and contrary that his father nicknamed him Reluctant. The only thing Reluctant ever did without prodding was to enlist. Catherine reflects on the difficulty of the birth, on the character of her son, then vividly describes her husband’s grief as he sits on the porch day after day, hoping for his son’s return from the war.

Each snapshot in Our War is performed by one of the six actors who make up the cast—Sara Waisanen, Lynette Rathnam, Tuyet Pham, John Lescault, Ricardo Frederick Evans, and Kelly Renee Armstrong—as well as guest performers. The show is directed by Anita Maynard-Losh.