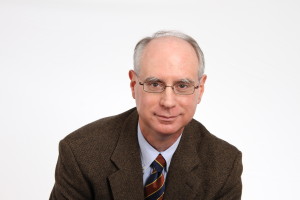 Jeff Broadwater is a professor of history at Barton College. He lives in Wilson, North Carolina, and has been a member since the late 1980s, with a lapse of a few years misspent practicing law.

When did you first develop an interest in history? In elementary school. When I was growing up historical characters and topics—Davy Crockett, Daniel Boone, the Civil War, the Old West, World War II—seemed to dominate popular culture, at least in the heartland of America. Movies and TV made history look like great fun.

What projects are you working on currently? With Troy Kickler of the North Carolina History Project, I’m editing a collection of essays on representative North Carolinians from the revolutionary era. I’m revising a journal article on James Madison and the War of 1812 and working on a conference paper exploring the evolution of Madison’s thinking about slavery and federal power. I’m also in the preliminary stages of a new book I’m calling Madison, Jefferson, and the Making of the Constitution.

Have your interests changed since graduate school? If so, how? I’ve moved from post-1945 politics and diplomacy to the 18th and early 19th centuries. The company is better. I’ve also become more convinced of the importance of ideas in history. Interests matter, but how people think often influences how they perceive their interests.

Is there an article, book, movie, blog etc. that you could recommend to fellow AHA members? Many readers might enjoy two fairly recent books from my era. James P. Byrd, Sacred Scripture, Sacred War: The Bible and the American Revolution (New York: Oxford University Press, 2013) and Thomas S. Kidd, God of Liberty: A Religious History of the American Revolution (New York: Basic Books, 2010) illuminate a topic that is sometimes neglected, when it is not being exploited for political reasons.

What do you value most about the history profession? The breadth of the discipline gives us an excuse to study almost anything.

Why did you join the AHA? Initially to help with job hunting. But I’ve remained a member from a sense of professional responsibility. It never occurred to me not to belong.

Other than history, what are you passionate about? Traditional, private liberal arts colleges. They are a diverse group, and they can offer students options, as well as the individual attention, not always available at a large university.

Any final thoughts? History and the more humanistic disciplines appear to be under siege. We need to embrace intellectual diversity, as well as other forms of inclusiveness, and reach out to allies wherever we can find them. More of us need to address the big issues that can interest broad audiences, and a few of us need to reread Strunk and White’s The Elements of Style.