In the late 1960s, when I was wavering about my Yale doctoral studies in Chinese history, my mentor, Jonathan Spence, intervened with some sharp words and brilliant advice. “You will finish the doctorate. It can be done in two very tough years. And whatever you do in your career, you will find the PhD invaluable.” Spence was right, but in ways that neither of us could have forecast.

The dissertation—an in-depth investigation called “Policies and Factionalism in the Oboi Regency, 1661–69”—was the hardest thing I’d ever done. For two years I ferreted though court documents, biographies, and local histories, all in classical documentary Chinese, trying to find the patches of historical forest in the midst of dense linguistic trees. What did I learn? First, that I could do original research and continually rethink my hypotheses in a sustained bust of energy. Second, that I could know a period of history better than almost anyone else on the planet. But third, and most importantly, that in historical research, as in intellectual and creative life more broadly, the bigger insights arise from intimate, detailed knowledge.

In a career characterized by several zigzags, my three constants have been a commitment to university and public education about Asia, a deep fascination with China, and an enduring love of history. My commitment to public education grew from my antipathy to the Vietnam War; as a Yale graduate student, I helped mobilize a major public awareness campaign of rallies and teach-ins, seeking to counter the American knowledge gap with historical insights and contemporary facts. I proudly recall speaking loudly against the Vietnam War alongside John King Fairbank, a towering figure in Chinese history, at a large assembly of leading Asianists in Philadelphia. I was an activist historian at the same time I was doing my doctoral work as an archival historian.

My career began conventionally enough, at Trinity College, even though I took an unconventional approach to teaching. With the help of my graduate students, I invented a simulation game that my undergraduate class played in lieu of a final examination. In The Ch’ing Game (now called The Qing Game) students played roles based on well-researched papers on 18th-century China. It became a big hit on campus, and I’m proud to say that the game is still used in high school and undergraduate classes today. 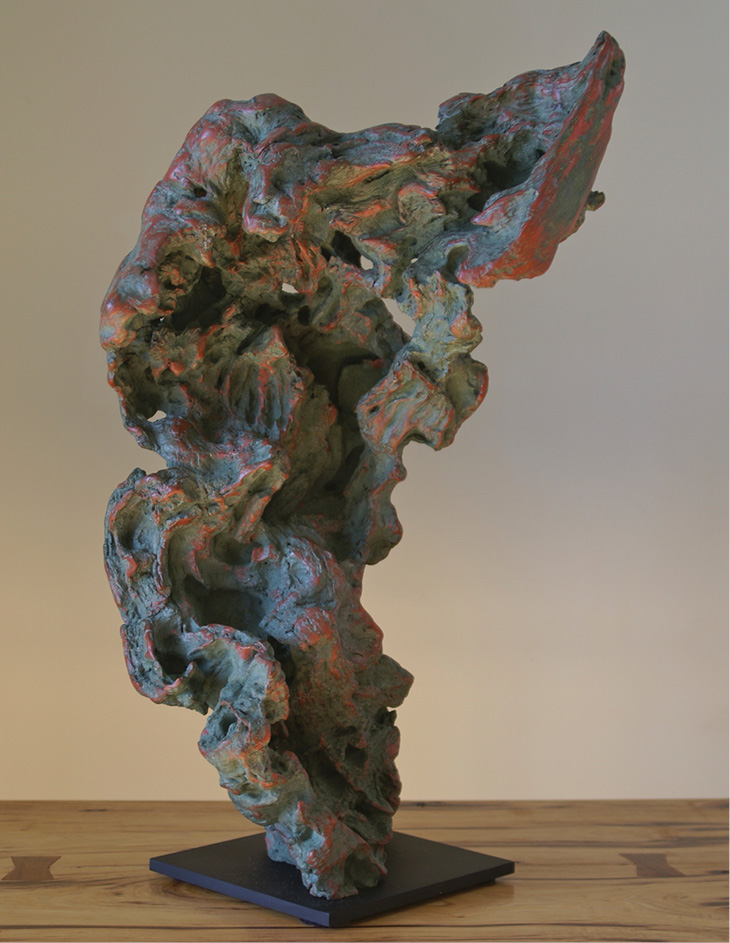 Robert Oxnam, Gremlin, weathered wood, burnished organic paints, and natural waxes, 2011. Finding this wooden piece buried and waterlogged on a rocky Long Island beach was akin to the joys of the best historical research—uncovering an overlooked detail that turned out to be a gem in the rough. As I cleaned and balanced the piece over several days, it became apparent that Gremlin had all the characteristics prized by connoisseurs of ancient Chinese scholars’ rocks—intriguing craggy shape, bumpy surface, mysterious cave-like holes. Finishing the work with burnished green and red milk paint and organic waxes brought Gremlin alive as an example of what the French call objet trouvé (“found art”).

In the late 1970s, I did something more radical: I left my cozy, tenured post at Trinity and became director of the Asia Society’s China Council. The Asia Society is devoted to high-quality, balanced public education—through conferences and seminars, visual and performing arts, K–12 education materials, business and policy studies—about every facet of Asia. It now has centers across the Asia-Pacific region and the United States.

Although this was an abrupt change of course, I got to work with top-flight China experts from around the country and I was still teaching, only now to national audiences. The China Council, which drew together some of the most prominent Americans involved in China (Doak Barnett, Michel Oksenberg, Jerome Cohen, Theodore White, Mary Bullock, Tom Brokaw, Harry Harding, and many others), became central to American public understanding of China and US–China relations. The council projected thoughtful, balanced views on China through books (like Dragon and Eagle), briefings about China in print and broadcast media, and 15 regional councils across the United States.

Among the many contributions of the China Council was the notion that China and US–China relations must be understood through historical patterns of rulership, factionalism, loyalty, and bureaucracy. With its breadth of vision, the China Council was instrumental in bridging the chasm between the United States and China during the crucial decade of the 1970s, the era of détente and normalization.

Whenever there was a major event, network television anchors called me immediately to help coordinate their coverage and to offer on-air commentary. For instance, I spent 36 hours following news of Mao’s death on September 9, 1976, as NBC’s key China expert for the Today Show and the NBC Nightly News, giving special consideration to Mao’s history, teaching Tom Brokaw and Jane Pauley how to pronounce Chinese terms and names, and appearing during the interviews. Other China Council specialists were featured on CBS, ABC, and PBS, and wrote articles for the major newspapers and newsweeklies. We know from audience feedback that tens of millions of viewers were reached during this “high ratings window.” But more important to me were the letters, including one that I treasure: “thanks for the history stuff—now that Mao’s dead, he finally seems alive to me.”

From 1981 to 1992, I was president of the Asia Society, and I drew on my training as a historian in virtually all my activities. My vision for the society emphasized the past as key to understanding the present, and this vision guided our art exhibitions, public interviews with figures such as the Dalai Lama and Barbara Tuchman, and explanations of Asia’s economic takeoff to businesspeople. Maybe I took it too far; in a staff party skit I was caricatured as saying: “You want to know about why Deng Xiaoping is modernizing China so quickly? We’ll begin with the Shang dynasty three thousand years ago.”

Becoming the Asia Society president was the toughest transition in my professional life. I was suddenly immersed in constant meetings, feverish fund-raising, and testy staff and trustee issues, while wondering whatever happened to those days when life was all about teaching, ideas, and research. I took solace in the notion that I was reshaping the Asia Society into an intellectual and cultural hub for enhanced understanding on both sides of the Pacific, and preparing it for an era in which the Asia-Pacific region would take center stage. By the end of my 12 years as president, I was delighted by the society’s transformation, and just as delighted to explore new pastures.

I soon rediscovered academic life in the form of visiting professorships, including posts at Beijing and Columbia Universities. But I have also pursued activities in modalities and venues far beyond the classroom. As an offbeat way of conveying history to broad audiences, I wrote Ming: A Novel of Seventeenth-Century China, which had a similar goal as The Qing Game; both sought to instill historical empathy for a distant world through immersion in late-imperial Chinese society, culture, and politics.

The same public education instinct informed my service as on-air expert and narrator for a nine-part MacNeil/Lehrer NewsHour series on China in 1993 and 1994. And for several years, I took business leaders to Asia, delivering lectures and briefings that emphasized not just economics and politics but the need to understand the powerful impact of history and culture on modern Asia.

In 1995, I was honored to be the lecturer for a three-week China trip led by Bill Gates and Warren Buffett. Gates is a voracious reader, and he poured over all of the 20 books I suggested about Chinese history, storing detailed information in his head. I was stunned at his ability to recall specifics about the Li Zicheng peasant rebellion in 1644 and his desire to debate how the Chinese Civil War might have had a different outcome. Although he surely wanted to understand aspects of Chinese history that might be useful in his commercial dealings, I think he was also motivated by raw curiosity about China’s past.

The upshot of all these activities is that I remained a history professor, in effect, and had the additional satisfaction of reaching students well beyond the conventional classroom.

Recently, my career has taken another turn, into the world of art making and art history. Through sculpture and photography, I have explored how traditional Chinese aesthetics can influence contemporary art. My found-wood sculptures are deeply influenced by the great tradition of Chinese scholars’ rocks (gongshi): each piece is painstakingly balanced and cleaned to release its inherent energy (qi), then preserved with organic milk, burnished, and waxed. My approach to photography also uses ancient roots: I focus on glacial rocks, use macro lenses to reveal the smallest of detailed patterns, and revel in how the camera reveals complex abstractions, akin to calligraphy, ink painting, and landscape painting.

Now in my 70s, I have found special pleasure in lecturing about the relationship between art history and political, social, and intellectual history. It’s a rich vein—one that reminds me of the Chinese literati (wenren) who saw scholarship, art, and teaching not as separate professions, but as different manifestations of their intellectual lives. Most of them spent their early years deep in study as they sought higher degrees. The wenren’s academic work shaped their thinking; the “advanced scholar” (jinshi) degree was critical to their credibility. Of course, the PhD degree is not an exact parallel, but they have something in common: each can be seen as a gateway to a life that has many phases and many options.

Robert Oxnam is now working as a consultant, writer, and artist.