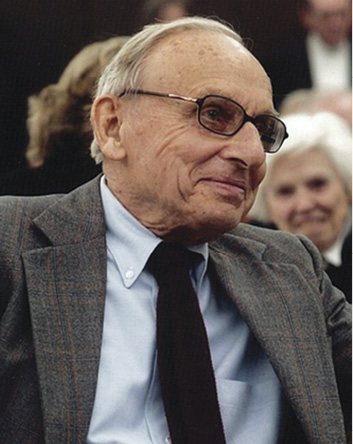 Paul F. Boller Jr., the first Lyndon B. Johnson Chair in American History at Texas Christian University, died on March 16, 2014, at age 97, in Fort Worth, Texas.

He was born on December 31, 1916, in Spring Lake, New Jersey. His father was a Presbyterian minister, and his parents were firm believers in the Social Gospel. He grew up in a house in which discussions of important issues of the day were the norm rather than the exception.

A natural scholar, he attended Yale, where he was in his element. Upon graduation in 1939, he was selected for Phi Beta Kappa and was class valedictorian. He began the American Studies graduate program at Yale, but as for many others of that exceptional generation, World War II interrupted his work. He joined the Navy and was sent to the Japanese Language School at the University of Colorado for a year of intensive study.

The language school recruits were an unusual bunch: nearly all of them intellectually gifted university graduates who were far more comfortable in libraries than on athletic fields. They were the despair of the career petty officers who were responsible for their training in physical fitness and military drill. With remarkable understatement, after the war the unit’s commanding officer wrote, “It is not surprising that, with their academic backgrounds, many language officers found it difficult to adjust to a military routine.” But they performed an important service. As American forces won battles, they translated captured Japanese documents, many vitally important.

Sometimes the translators landed with invasion forces in order to interrogate Japanese prisoners. Boller was picked for the assault on Iwo Jima, but at the last minute was instead ordered to join the staff of Admiral Chester Nimitz as the senior translator in the Navy Intelligence Center on Guam.

The transfer led to important things. By this time B-29s were making daily bombing raids on Japan, and an intelligence officer proposed that Boller, working with POWs, prepare leaflets in Japanese to be dropped in cities that might be bombed. The leaflets listed a number of cities and advised the Japanese “to evacuate the cities named and save your lives.” On the reverse side was a photograph of a B-29 dropping bombs.

After the war, Boller returned to Yale and completed his doctoral degree in 1947 with Ralph Henry Gabriel. His dissertation, reflecting his interest in Japan, was on the American Board of Commissioners for Foreign Missions and the Doshisha University in Kyoto, founded by a Japanese convert to Christianity.

His first academic position was at Southern Methodist University, where he taught from 1948 to 1966. During that time he published George Washington and Religion (1963) and articles and essays on topics ranging from Thomas Jefferson’s vision of American democracy to the irrelevance of the Communist Party in the United States. None of these made him popular in ultraconservative circles. When he wrote an article defending Franklin Roosevelt’s recognition of the Soviet Union in 1933, the Chicago Tribune published a scornful editorial panning him as “an obscure professor” in Texas. He was always proud of that and later titled his published reminiscences Memoirs of an Obscure Professor (1992).

Despite his long tenure at SMU, his many friends there, and his affection for his students, Dallas was never a comfortable place for him. Always liberal in his politics, he was accused of being a communist and received threatening letters and hate calls in the middle of the night. SMU’s president was urged to “Fire Boller!”

In 1966, he accepted a teaching position at the University of Massachusetts at Boston. There he continued his work in American intellectual history with American Thought in Transition: The Impact of Evolutionary Naturalism (1969) and American Transcendentalism, 1830–1860 (1974). But in his opinion the far left there was as intolerant as the ultrarightists he had met in Dallas. Besides that, he complained, they had too many department meetings.

When he was offered the Lyndon B. Johnson Chair at Texas Christian University in 1976, he did not hesitate to accept. It was at TCU that he came up with a new idea for a book about American presidents. Presidential Anecdotes, published in 1981 by Oxford University Press, was unique, presenting short biographical sketches of the presidents followed by stories gathered from many sources that illustrated their lives, careers, and personalities. It became a best seller and was followed by other presidentially themed works: Presidential Campaigns (1984), Presidential Wives (1988), Presidential Inaugurations (2001), and Presidential Diversions (2007). Other projects he thought of along the way included Hollywood Anecdotes (1987), written with Ron Davis; They Never Said It (1989), with John George, about misattributed quotes; Congressional Anecdotes (1991); and Not So! Popular Myths about America (1995).

He took full advantage of retirement, what he called the “big sabbatical,” to enjoy writing history. Only a few weeks before his death, he was thinking about a collection of presidential letters.

Despite his many publications, teaching and encouraging students were as important to him as research. He contributed generously to the TCU Honors Program, a history department fund for graduate research travel, and a symposium, named in his honor, on the American presidency. When called upon to speak at department events, he invariably brought copies of his latest book, which he gave away.

Until recently, he was an almost daily visitor to our department, and we were always glad to see him. He will be greatly missed.