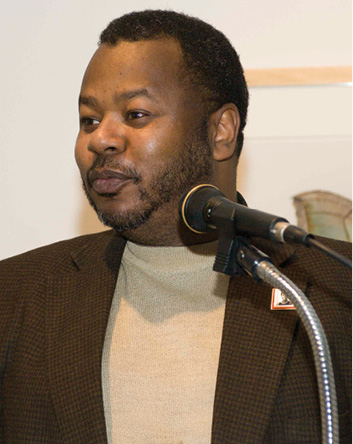 Felix Armfield passed away on April 30, 2014. He was 51. A native of Greenville, North Carolina, Armfield received his BA and MA degrees from North Carolina Central University, and his PhD in history from Michigan State, with a concentration in African American history and archival administration.

He joined the history department of Western Illinois University as an assistant professor in 1995. In 2000, he relocated to Buffalo to join Buffalo State’s History and Social Studies Education Department, where he was a professor for the past 14 years. Armfield was also a member of the African and African American Studies Interdisciplinary Unit at Buffalo State and a member of the graduate faculty.

Armfield was actively involved in the Buffalo State and western New York communities. In 2005, he served as project director of the Niagara Movement Centennial Distinguished Lecture Series, and he was instrumental in establishing the African American ancestral heritage tours at Buffalo’s Forest Lawn Cemetery. He served as an executive board member for the Michigan Street Preservation Corporation and brought his archival administration skills to bear on the Nash House Preservation Project. He served as associate director of the Monroe Fordham Regional History Center at Buffalo State, of which he was recently named interim director.

A dedicated teacher and scholar, Armfield was recognized for his teaching and service at Western Illinois University and at SUNY Buffalo State. Most recently, he was awarded the Hero Award from Buffalo State’s Disability Services Office, the college’s Students’ Award for the Promotion of Respect for Diversity and Individual Differences, and the William Wells Brown Award from the Afro-American Historical Association of the Niagara Frontier.

Armfield was an active member of Alpha Phi Alpha Fraternity, and he was passionate about and dedicated to preserving its history and legacy. His most recent publication, Eugene Kinckle Jones: The National Urban League and Black Social Work, 1910–1940, honors the legacy of this important black leader of the early 20th century and one of the jewels of the Alpha Phi Alpha Fraternity.

Armfield was also an active member and former board member of the Association for the Study of African American Life and History (ASALH), which will celebrate its centennial in 2015. In his memory and to honor his unwavering commitment to ASALH, his “sociation,” and to his alma mater, “dear ol’ NCCU,” the Felix Armfield ASALH-NCCU Fund has been established to support North Carolina Central University history majors’ participation in ASALH’s centennial convention. A memorial fund has also been established in his honor at SUNY Buffalo State.