Department Specializations and the History Major: What We Learned from the AHA’s 2014–15 Directory

We have been watching the health of the history major carefully, and this article is the first of several efforts to look deeply into the data to understand why some departments are growing even as the history major overall appears stagnant. While the raw number of history bachelor’s degrees has risen steadily, if slowly, history’s share of all bachelor’s degrees has been relatively flat for many years; in most recent years it has seen a slight dip (see Perspectives, March 2014). But this downturn has not been experienced by all. Many history departments are increasing both their numbers of majors and their share of their institutions’ bachelor’s degrees. With this in mind, we returned to completions data from the Department of Education and the AHA’s most recent Directory of History Departments, Historical Organizations, and Historians (2014).

Virtually all of the 650 departments listed in the Directory claim US history as an area of specialization. US history is not being replaced wholesale when departments include other parts of the world among their specializations (fig. 1). The example of Asia is instructive—in 2010, 80 percent of departments had at least one historian focused on Asia (Perspectives, September 2011). But only 51 percent of departments listed “Asia” as a departmental focus for the 2014 Directory, suggesting that departments are not laying claim to fields in which they have only a few faculty working, and instead are making an earnest attempt to describe what their departments are best at and what they’d like to be known for, even as they expand their scope. 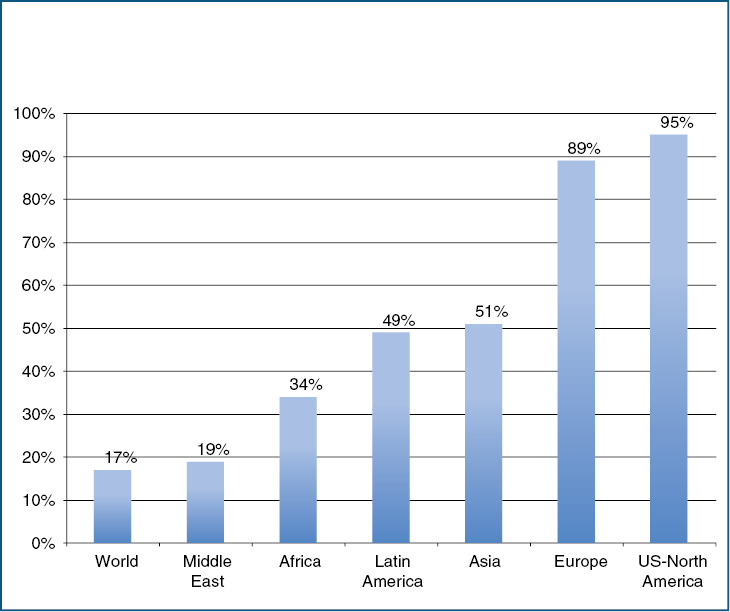 The graph above shows the percentage of departments listing themselves as having a specialization in a given geographic area. Source: AHA’s Directory of History Departments, Historical Organizations, and Historians, 2014-15.

Figure 2. Gains and Losses for Select Areas of Specialization 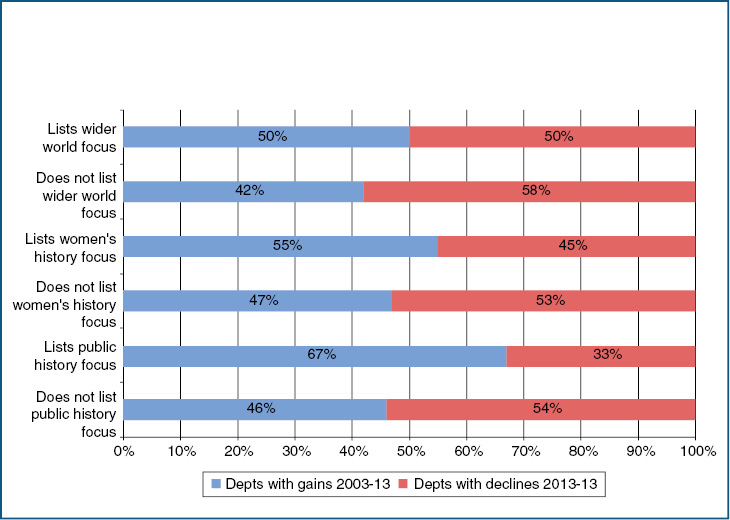 A minority of history departments in the directory (48 percent) increased their share of their institution’s bachelor’s degrees from 2003 to 2013. But certain departmental specializations are associated with a greater likelihood of an increase in “market share.” Sources: AHA’s 2014–15 Directory and the National Center for Education Statistics (NCES).

Eighty-four departments listed women’s history or gender as a specialization. Among these departments, 55 percent saw an increase in the share of bachelor’s completions from their institution. And among those institutions that did not list women’s history as a specialization, 53 percent saw a declining market share. And although very few programs listed themselves in the Directory with an African American history focus, these programs did very well by comparison—63 percent made gains.

But the group that included a public history or museum studies focus did even better. Among these 82 programs, 67 percent made gains—remarkable when contrasted with the record of all the departments in the directory, 52 percent of which saw their share of their intuition’s bachelor’s degrees decline.

Any exploration of factors that contribute to growth in history majors should include discussion of tuition, and a fuller account of tuition as a factor will be part of future articles. But how tuition relates to geographic specializations is surprising. Departments in the directory that saw increases had a significantly lower tuition, on average ($18,000), than those that saw declines in their share of bachelor’s degrees ($25,000). And there is a strong correlation between a higher number of wider world specializations listed by a department and higher average tuition (fig. 3). 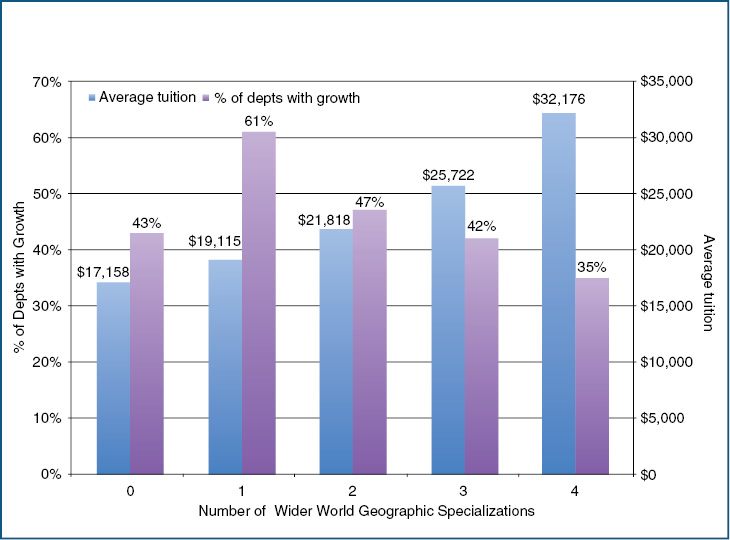 This is all suggestive, not definitive. It tells us that certain subjects are associated with more successful marketing of the major, and to what degree, but not that these subjects caused the growth. And even among those subjects associated with growth, the high percentage of programs that have seen losses is cause for concern. But paring down programs to a few core specialties, or stripping away specialties sometimes regarded as peripheral—such as women’s history, histories of the wider world, or public history—does not appear to be a solution.