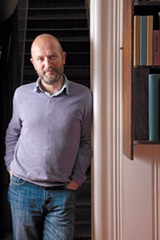 James Vernon has taught history at the University of California, Berkeley since 2000. He lives in Kensington, California, and has been a member since 2008.

Alma maters: I did my BA, PhD, and a postdoc at the University of Manchester in the UK. When no-one else would hire me they gave me a job and I taught there for seven years.

I was always fascinated by the past and drawn to the wisdom or experience of age. Yet studying history came alive for me in high school. I had two teachers who taught me that history was not about remembering dates and names but about arguing with the present through the past. It was electrifying. This was in 1980s Britain, and in the early years of the first Thatcher government I was able to do a project on the General Strike of 1926. I went to the University of Manchester to study politics and modern history in 1984 at the end of the Miner’s Strike.

I have just finished an argumentative little book trying to recuperate an understanding of modernity as a singular condition, albeit one that has different manifestations. Distant Strangers: How Britain Became Modern is just out with UC Press. It was essentially the product of a decade of graduate teaching at Berkeley and a Mellon-funded consortium on British history with Chicago and Yale. Normally it takes me years to figure out what to do next but this time I have two projects.

The first is the last installment for a new Cambridge History of Britain, I am doing 1750 to the present. It is essentially a textbook aimed at students in the former British world. Writing a national history in a post-national age is challenging but a lot of fun. It has enabled me to return to the central place of economic history in the British world system. Indeed, I am constantly surprised by how much of the Anglo-Marxist national story I grew up with still shapes what I am doing.

The second is essentially a history of neoliberalism in Britain from the 1970s. I lived through the unraveling of the welfare state and having written two books [Politics and the People (1991) and Hunger (2007)] which are essentially about the formations of liberal and social democracy, I want to now turn to neoliberalism.

Graduate school does not quite capture my training. In the late 1980s in Britain there were not many foolish enough to do graduate work and at Manchester there were less than a handful of us. We took no classes but went straight to the archive and then tried to write. Despite the isolation it was a heady time. Everyone was interested in political history then because it was the way the Left was arguing with itself about the centrality of class and whether a materialist understanding of history made sense any longer. E. P. Thompson was finishing Customs in Common at Manchester the first year of my graduate work and raging against the revolt from his work that I too was engaged in. This very English debate about class and Anglo-Marxism was of course being played out differently elsewhere. I was reading Lynn Hunt, Joan Scott, and William Sewell on France, Mary Ryan on America, Geoff Eley on Germany, and devouring the work that came out of subaltern studies.

Although political history and even the cultural history of politics has long been out of fashion, I am still interested in the history of the political and all my work remains animated by trying to figure out the relationship between the cultural and the material. What has changed are the ways into those debates.

The book that has most excited me in recent years has been Timothy Mitchell’s Carbon Democracy.

Apart from the friends I have made through it, the curiosity, passion and seriousness of purpose that drives so much of its scholarship. I also treasure the diversity of voices that it produces even though not all of them always get heard!

This is embarrassing. I first joined in 1990 when I was finishing up my PhD because there were no jobs in the UK and I wanted to move to the US where the sort of work I was doing was taken more seriously. I rejoined when my friend Barbara Metcalf became president of the AHA out of shame as much as solidarity. I am embarrassed it took me so long. The AHA is a remarkable organization and I have great admiration for the work it does in analyzing and representing the profession. I have long advocated for a similar body in the UK where historians have no single professional organization to represent them.

I am not a big fan of the AHA annual meeting. I have only ever attended when I am on a search committee and that has only accentuated my alienation from the event. The conferences that I love are the small ones when a group of people are thinking hard about a common question and I can’t sleep at night because my head is full of thought.

Probably too many things … I am passionate about defending what is left of public education in this country and in Britain. Public universities still educate 70% of those who graduate in the US and their ability to provide quality education is being systematically eroded by disinvestment. I am co-chair of Berkeley’s Faculty Association and much of our work is concerned with trying to maintain the public nature of the University of California despite the state’s disinvestment from the system. I am not a fan of the high fee/high aid model that so many public universities in the US are now adopting. The work of redistribution should not be left to local bodies; it is not fair to those who pay the full sticker price or to those denied a quality education at another institution that can not command high fees.

I am also passionate about football, aka soccer, and sailing. I have finally decided to teach a global history of soccer, so if anyone has any ideas ….