What’s in the October AHR?

The October issue of the American Historical Review is now online, and will soon appear in member’s mailboxes.Below is an excerpt from AHR editor Robert A. Schneider’s article for Perspectives on History. 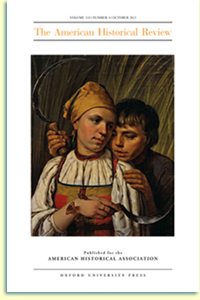 The October 2013 issue of the American Historical Review should soon be in members’ mailboxes and available online. Its five articles are an eclectic mix, illustrating the diverse approaches and topics that characterize contemporary historical writing at the professional level. The subjects of the pieces range from polygamy in early North America to serfdom in imperial Russia, medicine and mass culture in the United States in the interwar period, “modernity” in Africa, and decolonization in the post-WWII era. As usual, the issue contains our extensive book review section, which includes five featured reviews. As well, “In Back Issues” provides a glimpse of a few articles from 100, 75, and 50 years ago.

In “‘Having Many Wives’ in Two American Rebellions: The Politics of Households and the Radically Conservative,” Sarah M. S. Pearsall examines households and in particular plural unions in the context of two rebellions in the far north of New Spain: the Guale Rebellion of 1597 and the Pueblo Revolt of 1680. Before exploring these familial and sexual arrangements, she considers the novel meanings of polygamy in Old and New Spain. For many Spaniards, polygamy represented resistance to Christianity, apostasy, desecration, political subversion, and violence among the indigenous population. For many Native Americans, however, it indicated masculine status and authority, as well as positive notions of labor organization, hierarchy, and political confederation. Revisiting textual evidence in conjunction with archaeological findings, Pearsall explores how and why transformations of households and gender roles occurred. Too often, she argues, scholars have been beguiled by calls for tradition, such as those heard in the Pueblo Revolt, thus failing to appreciate the transformative possibilities inherent in such appeals. Far from implying a return to precolonial ways, the rebels’ schemes had the potential to effect a profound alteration in existing Pueblo cultures, especially in terms of gender. It is possible to trace how, in some contexts, both men and women made “radically conservative” choices, connecting themselves consciously to the past in innovative ways. Read more…