The October issue of Perspectives on History is online and in the mail, and features two takes on President Obama’s higher education proposal, a report on how oral historians are looking back at Hurricane Sandy, useful reminders and information about the annual meeting, and a look at historical imagination, empathy, and the perils of the recent past. 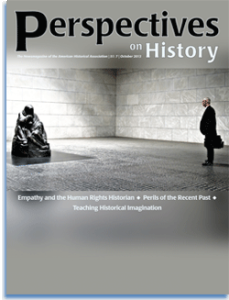 Obama’s higher education proposal may have fallen from the headlines, but the program, much of which does not require congressional approval, will proceed apace (if and when the government re-opens). Secretary of Education Arnie Duncan recently met with professors and administrators at the Time Summit on Higher Education and said that critics of the plan were “more than a little silly” for criticizing a college-ranking system that has yet to be fully developed. He acknowledged that coming up with such a system was difficult, but that this should not be a “discussion-ending excuse for inaction.”

AHA President Kenneth Pomeranz and Executive Director James Grossman both tackle the proposal in this month’s Perspectives. Pomeranz argues that “the president’s proposals are aimed at where the problem isn’t” and energies might be better spent restoring the public funding of higher education that used to enjoy bipartisan support. Grossman notes that the president’s proposed metrics emphasize a utilitarian vision of “value,” ignoring the larger picture of what education brings to the student and to society. We invite readers to visit our AHA Roundtable on the subject, and to decide for themselves if these criticisms are more than silly.

It’s time to make plans for the AHA’s annual meeting, and this month’s Perspectives offers a special section on hotels, transportation, and logistics. Debbie Ann Doyle, the AHA’s coordinator, committees and meetings, explores “Six Myths about the Annual Meeting,” and Anne Paulet, professor of history at Humboldt State University, writes about her undergraduate students at the annual meeting, and argues that more undergraduates should go.

In the coming weeks, we will be highlighting more features from this month’s issue on AHA Today, including five featured articles that are now available only to members, but will soon be opened to all.