Most of the participants in the National History Center's International Seminar on Decolonization arrive at their topics the usual way-by reading a fascinating article or book, listening to a dynamic lecture, or viewing a compelling film. But some find another way. One of the highlights each year is learning about those alternative paths.

Seminar Director Wm. Roger Louis always reserves time at the beginning of the first day for a quick around-the-room in which leaders, participants, and staff must reveal their own connections to decolonization and the roots of their interest in the topic. Louis himself had one of the more unusual introductions. As a 20-year­old undergraduate on leave from the University of Oklahoma, he found himself in Egypt in July 1956 when the voice of Gamal Abdel Nasser, booming from loudspeakers on the streets, announced the nationalization of the Suez Canal.

Several members of this year's cohort also arrived at decolonization as a subject because of their experiences in decolonizing countries. I recently asked them to tell me more about their own roads to the topic. Devika Sethi of the Jawaharlal Nehru University in New Delhi, who works on press censorship in India, noted that having grown up in a former colony, her interest was automatic. Andrew Dilley of the University of Aberdeen, who works on business interests in parts of the former British Empire, said that his interest may derive from his family history. His British great­grandfather was a banker in Persia (now Iran). "At one point in the 1920s, the entire family had to escape hiding in baskets with my grandfather and his fellow triplets throwing stones at the nationalists," he wrote.

Nicole Bourbonnais of the University of Pittsburgh studies the politics of birth control in the Caribbean. "My interest in decolonization in the Caribbean began, somewhat paradoxically, when I was 18 years old and decided to volunteer in Africa," she said. "Being somewhat naïve and apparently a poor geography student, however, I ended up signing up to a program that sent me to Guyana (in South America) rather than Ghana (where I thought I was going)." Fortunately, she spent her time in Guyana conducting reproductive health services and HIV/AIDS workshops with a team of Canadian and Guyanese youth assembled by a Canadian nongovernmental organization. Though located on the northern coast of South America, the former British colony is culturally allied with other Anglophone Caribbean islands, and she developed an interest in the whole region.

Joanna Tague of Denison University knew where she was going, and even what she wanted to study when she arrived in Tanzania as a graduate student. Her plans to study socialism fell by the wayside as she learned that Tanzanians were much more interested in the story of Mozambican refugees and their role in building an independent Tanzania. "In country, I realized that during Mozambique's war for independence from Portugal, the newly independent Tanzanian state merged refugee settlement with rural development. Tanzania harnessed the labor power of Mozambican refugees for its own nation-­building schemes," she said. The result is her work on humanitarian aid and refugees from Portugal's former imperial possessions in Africa. 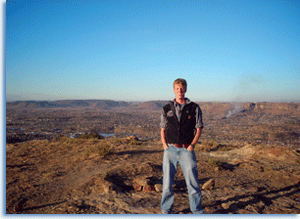 John Aerni-Flessner of the State University of New York at Cortland came to his work on Lesotho, a former British colony completely surrounded by South Africa, as a teacher there. "I went to Lesotho in 2002 as a 22-year­old college graduate with a semester of student teaching in rural Iowa under my belt, and the belief that I could make a difference in a year," he wrote. "It was the rhythms of life in Lesotho, the community­centered attitude of people, and the geographical situation of being independent but completely surrounded by another, much larger and economically powerful, country that piqued my interest." To test his commitment he accepted a job as far away as possible, in an Eskimo village in Alaska. After a year, he knew his fascination with the tiny country was lasting. For more on his adventures and those of other decol "seminarians," as they call themselves, please see the National History Center's website.

Next month we'll meet seminar member Birte Timm, a German scholar whose love affair with Jamaica began with a research trip in 2005. Her academic interests have led her not only to write about the island nation but to start an educational nonprofit that helps Jamaican children and youth appreciate the history of their country.

- Marian J. Barber is the associate director of the National History Center.