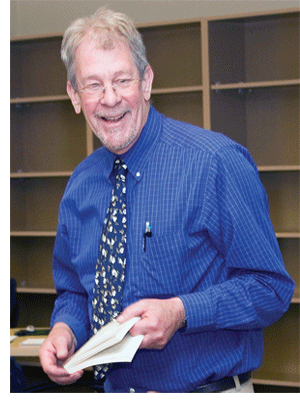 Walter Sargent, 64, associate professor of history at the University of Maine at Farmington (UMF), died unexpectedly on January 27, 2013, in Wilton, Maine. New England-born and raised, his scholarship uncovered the lives of ordinary Revolutionary War soldiers in that area. Walter came to this history circuitously, after spending many years in the music business in San Francisco. He received his bachelor's and master's degrees at San Francisco State University in 1994 and 1996, respectively, then immediately pursued a PhD at the University of Minnesota where he claimed he was "the oldest graduate student in the history of the university."

Active in the Omohundro Institute of Early American History and Culture, the American Historical Association, and the Organization of American Historians (OAH), Walter's research on the lives of the New Englanders in the revolutionary era can be seen in several works, including, most recently, Louise Breen's edited collection, Converging Worlds: Communities and Cultures in Colonial America (Routledge, 2011). He also co-edited, with John Resch, War and Society in the American Revolution: Mobilization and Home Fronts (Northern Illinois Univ. Press, 2006).

Walter's work had broadened in recent years to encompass what happened to these soldiers after the war. What new challenges or opportunities awaited them, where did they go, what did they do? Among his nearly dozen presentations on the topic at regional and national conferences, a few titles will suffice to give a sense of the new direction in Walter's scholarship: "Planting Democracy and Plowing Capitalism on the Maine Frontier" (at OAH, 2012); "Maine Statehood and the War of 1812" (New England Historical Association, 2011); and "After the Revolution: The Impact and Experience of Veterans on the Maine Frontier" (Omohundro, 2008). Recently, his work took a quite different tack when he participated in an international conference in Corum, Turkey, with a paper about commerce and community among the 19th-­century Franks of New Smyrna.

After teaching at University of Wisconsin River Falls and then Winona State University, Walter accepted a job at the University of Maine at Farmington, where he arrived in 2006 as a specialist in early American history. Like many historians in the modern university, the word "specialist" belied the fact that, as a department of four in a university of about 2,000 students, everyone taught fields tangential to their expertise. Walter was able to turn his scholarship into courses that broadened and deepened student understanding of America's place in the world. He created a history of slavery in the Americas course that embedded the narrative into an Atlantic world perspective and thus took students well beyond New England's borders and also challenged their notion that slavery was a southern phenomenon.

Once in Maine, Walter threw himself into local history with his typical curiosity and enthusiasm, serving on the board of trustees of the Washburn­Norlands Living History Center, and presenting research to the public on local figures he found in the Wilton Historical Society records, such as Sylvia Hardy, a seven­foot "giantess" from the area who'd been part of circus sideshows. His research on Maine in the post-­revolutionary era took him to the Maine State Archives, where his association with the state archivist coincided with Maine's 150th commemoration of the Civil War. His work there help to create internship opportunities for many UMF students, who went on to explore the lives of ordinary Mainers who served and the impact that service had on the communities they left behind.

At UMF, Walter's principal and most-­beloved contribution to the university was his contact with and mentoring of students. There are many examples of his ability to shape student scholarship over the long term. One award-winning history student, not coincidentally the recipient of the first Walter Sargent Memorial History Award in May, had asked a question of Walter about Andrew Jackson's mental stability. His response was "That's a good question. Why don't you write a paper on it?" She stayed with that project all the way through her senior thesis. Another student wanted to do his senior thesis on "something about the Haitian Revolution." What emerged, through Walter's insight and guidance, was a solid exploration of the impact of the Haitian Revolution on South Carolina, where slave owners fought even the entry of whites from lands tainted by slave rebellion.

Walter's service to the university was visible in other ways as well. According to his colleagues, while chair of Curriculum and Planning, Walter's gentle humor and his push for a more orderly system reminded all of the centrality of the work to the university's mission. Every program change, every new major, every line of every course description that came through UMF in the past five years passed through Walter's hands. He was at once a shepherd and a steward of our academic integrity and development.

As a colleague, Walter was someone who willingly shared information, ideas, books, and papers, thus creating a collegial atmosphere in the best sense of the word. "Here, could you read this?" promoted in all of us a genuine appreciation for the notion that knowledge is best when not hoarded. From Walter we learned how to see history in contemporary life-how a president's speech, for example, might hearken back to the rhetoric of African American abolitionists. We also used Walter's expertise in the use of statistical data to explain and interpret for us. We try to model for students not just what it's like to be a historian, but what it's like to be a historian in the "real world" where questions require interest, research, data, interpretation, discussion, and a graceful willingness to share. For many of his colleagues, Walter was the standard. He is greatly missed.

The university has established the Sargent History Award in Walter's memory. For more details, contact the Ferro Alumni Center at UMF.