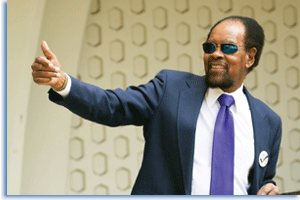 Dr. Mougo Nyaggah, an associate professor of African history and a nearly 40­year faculty member at California State University (CSU), Fullerton, died on Friday, March 29, 2013, in Fullerton. He had suffered a heart attack earlier that week and had been in intensive care. Since 2007, Nyaggah served as president of CSU Fullerton's chapter of the California Faculty Association and as a senator of CSU Fullerton's Academic Senate. He was 75.

Born in Kenya, Mougo attended school in Nyeri (Kenya) and later immigrated to the United States, where he obtained a BA (1964) with a major in history and minors in philosophy and classics from St. Mary's College in Moraga, California. He earned an MA (1967) in history and a PhD (1974) in African history from the University of California, Berkeley. His doctoral dissertation at Berkeley was titled, "Social Origins of the Asante Traditional Administrators, 1700-1900."

Prior to his arrival at CSU Fullerton in 1973, Mougo had already taught at a range of institutions. These included teaching history and anthropology at St. Mary's College; history at the College of the Holy Names in Oakland; Afro-American history at the College of San Mateo; Swahili at Berkeley and the City College of San Francisco; as well as history, English, and social science at the Intermediate School of Kianyaga (Kenya).

When Mougo came to Fullerton as an assistant professor of history in 1973, George Giacumakis was chair of the history department, and the teaching load was demanding. For his first semester at Fullerton, Mougo was scheduled to teach four upper-level courses three times a week, with his first class starting at 8 a.m. and his last class ending well after 9 p.m. Four years later, when he was promoted to associate professor, Thomas Flickema was chair and Lee Bellot, a fellow historian, was dean of (what had by then become) the School of Humanities and Social Sciences.

During his long and impressive teaching career, Mougo taught across the spectrum of undergraduate and graduate history curricula, including the world civilizations and US history surveys, as well as Afro­American History, African Marriage and Kinship Heritage in the Afro­American Family, California Ethnic Minorities, Introduction to Social and Cultural Anthropology, Political Anthropology, and courses on historical methodology. He taught a wide range of courses on Africa, his field of expertise, including History of Southern Africa, History of West Africa and the African Diaspora, and African Cultures and Societies.

Mougo talked about his teaching philosophy when I was hired at CSU Fullerton 12 years ago. His approach could be summarized as follows: "Teach them to think and learn critically. Teach them the material as if it has never been taught before. And teach them by being fair to all." Mougo was an avid supporter of our students, and he frequently contributed to our history scholarship funds.

For almost 10 years, our offices were across the hall from each other, and I was always impressed how well he kept up with political and social developments in my own homeland (Germany), as well as world events generally. I remember him saying, more than once, "We are both from the other side of the ocean, so we have to make sure that our students understand that Orange County is not all there is."

Mougo's most recent archival research and field work in Africa's colonial and modern period took him to Rhodes House at Oxford University's Bodleian Library and the British National Archives, as well as archives and libraries in Ghana, Kenya, South Africa, and all over the United States. His publications appeared in the Journal of the Pan African Study Society, the Journal of African Economic History, the Journal of African Studies, and other scholarly venues. He presented papers at numerous national and international conferences.