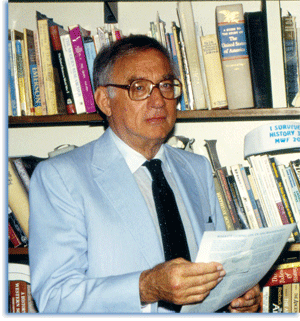 Morris Schonbach, professor emeritus of history at California State University, Northridge (CSUN), died on March 18, 2013, at age 91 in Santa Monica, California. Schonbach taught courses in American cultural, intellectual, and social history at CSUN from 1964 until his retirement in 1992. He also taught briefly at the University of California, Los Angeles (UCLA) in early 1959 and then at Brooklyn College and the City University of New York from 1960 to 1964. He completed his BA and MA in history at UCLA in the mid-1950s, and his PhD in history in 1958 under the direction of Professor Theodore Saloutos. In 1960, Morris held a research fellowship at the Harvard University Center for the History of Liberty in America, where he worked with, and was greatly influenced by, historian Oscar Handlin.

Morris Schonbach moved with his family to Los Angeles from Wellsville, Ohio, in the 1940s, where he was born and had spent his youth and teenage years. He frequently recalled to colleagues and students what life was like growing up the son of a middle-class Jewish merchant in a small Midwestern town, how he had excelled in high-­school baseball and tennis (both of which remained a lifelong passion), and how, as the one Jewish boy in his high school, he often dated the most attractive Christian girls. He always said that he came to appreciate what it meant to be an outsider because of his life in Wellsville-even as he fully participated in the youth culture of his day-and how that experience shaped and influenced his interest in the history of assimilation and the so-­called "other" before most academics ever had used the term. He also came to Los Angeles an enthusiast of classical music, which he continued throughout his life to enjoy and relish, as did his brother, Sanford, who became the principal violist of the Los Angeles Philharmonic Orchestra.

Schonbach's dissertation, Native American Fascism during the 1930s and 1940s: A Study of Its Roots, Its Growth, and Its Decline (Garland Press, 1985), broke new ground in the 1950s by covering a subject largely untouched at the time. The book explored the meaning and character of fascism in the United States, as distinct from its European antecedents and bedfellows, by examining the racial and nihilistic overtones, anti-­intellectual and psychological appeal, reasons for its limited embrace by mainstream Americans in the 1930s and 1940s, and the government reactions to it. He followed his dissertation with a small book on the history of radicalism in New Jersey, Radical and Visionaries: A History of Dissent in New Jersey (D. Van Nostrand, 1964). Both works provide valuable information and important insights based on numerous oral interviews and government documents as to how radicalism of one sort or another influenced American life by "creating doubts and stirring people to re-evaluate what they had taken for granted.  . . ." In doing this, Morris, again somewhat ahead of his time, approached history "from the bottom up," when the study of non-elites was just beginning to emerge as a mainstream focus within the profession.

Morris's teaching at CSUN always reflected his interest in how ideas became popular, died out, and generated sympathy, as well as fear and often rage among average Americans. He explored what abolitionism, populism, progressivism, women's suffrage, fascism, communism and anti-communism, the civil rights movement, feminism, the 1960s anti-war movement, and the emerging conservative thrust of post-Vietnam era politics had in common or differed as important dissenting movements. His classes exposed students steeped in the anti-Vietnam War and civil rights movements to how American dissidents had fared in the distant and not too distant past. His scholarship informed his activism, such as when he participated in the march from Selma to Montgomery, Alabama, in 1963. He also helped found the African American studies department at CSUN in the late 1960s, a program for the study of the history of Jews in America, and served as the department advisor and mentor to scores of African American and Jewish studies students over the years. CSUN recognized his outstanding contributions with a Distinguished Teaching Award in 1967.

My fondest memories have less to do with Morris's scholarship and teaching, however, than with his sartorial style of dress and manner, mischievous banter with colleagues and students about the merits of Joe DiMaggio versus Ted Williams as legitimate subjects of popular culture, the differences between East Coast and West Coast intellectuals, and his humorous ruminations on why a student mural painted to commemorate the US Bicentennial should be preserved as a kind of dissenting folk art. Professor Schonbach's ability to interject whimsy and humor into teaching, along with his mastery of the historian's craft as method that could be taught, left its mark at the university and on hundreds, if not thousands, of his students as well as all of his colleagues.

As a man, Morris was something of a bon vivant-a trait that he purposely brought into the classroom in ways that intrigued his students. Sometimes he would wonder in his later years if any of what he had accomplished as a teacher and scholar really mattered, and then an eager young student or two would drop by his office to talk about the radicalism of the American Revolution, and he would know that it did. When he retired, the history department at CSUN lost a mindfully delightful relic of a past era as well as a truly remarkable teacher, and the profession as a whole is a less charming one because of his death.