Ronald J. Granieri is a contract historian for the Office of the Secretary of Defense and senior fellow at the Foreign Policy Research Institute. He lives in Westchester, Pennsylvania, and has been a member of the AHA since 1993. 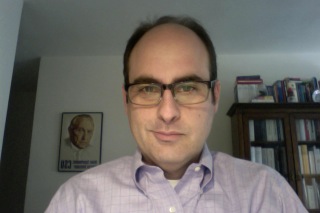 Ever since I watched the historical animated series Professor Kitzel on Canadian TV as a child and realized that there were so many exciting stories from and about the past.

My main job currently is writing s study of Caspar Weinberger’s tenure as Secretary of Defense for the Office of the Secretary of Defense Historical Office. I also lead a study group at the FPRI on America and the West, and host a monthly discussion of current events at FPRI, Geopolitics with Granieri. At the same time, I am trying to complete a study of German Christian Democracy since the 1960s as well as a history of the Atlantic community—both projects that I started when I was still on the tenure track.

I was always something of a generalist, with broad interests in the history of international relations and its connection to contemporary affairs, but since my involuntary separation from the university world I have become much more directly focused on current events and US policy and much less on German history.

Besides Professor Kitzel? I think that every aspiring academic should be required to read Kingsley Amis, Lucky Jim, even if it is dated in some respects. I am also a fan of narrative histories and memoirs with vivid characters, from Harold Nicolson’s Congress of Vienna to Timothy Garton Ash’s The File. Anything that reminds students and professors that all of us are fallible human beings is valuable. History should encourage humility, after all.

Intellectual curiosity, the hunger to know and understand, and most of all, the people whom I have been privileged to know—colleagues, students, mentors.

I joined in graduate school once I realized how important access to Perspectives and the annual meeting were to professional development and the job hunt, and have come to value membership in the larger historical community.

Walking through the book display at a recent meeting, I bumped into one of the senior professors who had inspired me to pursue an academic career when I was an undergraduate, and also written letters for my admission to graduate school. He was very nice as he accepted my probably over-enthusiastic greetings and thanks, even if he may not have remembered me. Just a few steps later, I bumped into an undergraduate whom I had taught and mentored, and who was now in graduate school. It felt somehow comforting to be part of the Great Chain of Being.

Historians have a tremendous responsibility for communicating with the non-specialist public as we explore the roots of contemporary society. This includes not only the readers of blogs and books and articles, but also those undergraduates and extension school students taking their one and perhaps only history course. I fear that the incentives of the academic world undervalue dialogue with non-specialists in favor of ever more isolated conversations among experts. Individual historians must struggle against those perverse incentives, and those senior historians in positions of authority in the profession must continue to look for ways to adjust them. Otherwise we will be talking about less and less to fewer and fewer people, and that would be a tragedy.