Lavanya Vemsani is an associate professor of Asian history and religious studies at Shawnee State University. She currently lives in Portsmouth, Ohio, and has been a member of the AHA since 2009. 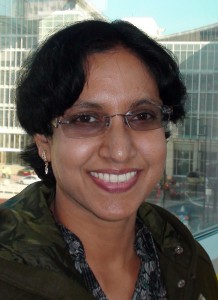 I don’t exactly remember when I first became interested in history as such, but looking back though I could attribute it to my middle school years, which I spent in a small rural town in India, which had several prehistoric stone structures and a variety of megaliths, which I later learned were the remnants of widespread prehistoric megalithic culture of South India. These stone structures fascinated me as a child. The megalithic monuments were revered by the villagers, who recounted numerous popular stories that connected them to folk mythology as well as Ramayana. Both of these aspects dominate my historical exploration, the historical factual analysis as well as the mythological and cultural analysis. Analyzing history together with the literary and cultural artifacts yields a nuanced and balanced understanding of history.

I am currently on sabbatical, and working on two book length projects to be published next year. Krishna in History, Thought and Culture: Encyclopedia of the Lord of Many Names will be published in 2014. This book will supplement the need for a basic resource book on Krishna, a major deity of Hinduism. It supplies the most basic to advanced information on Krishna across a broad spectrum of periods, spanning across a number of subjects, including wide range of geographical coverage. India, A New History is also slated to be published in 2014. This book attempts to utilize new research to comprehensively present an updated historical account of India. I have also published several articles on history and religions of India, including a book, Hindu and Jain Mythology of Balarama.

A lot of views and concepts regarding the understanding of history have changed over these years. A broader and comprehensive outlook on life and subjects developed gradually. However, I would like to note two of the most important views concerning Indian history that have changed over the years.

My views on Aryan invasion and migration: I used to firmly believe that there indeed was an invasion/migration by this group of people known as Aryans into India, influenced by the textbooks in India. However, this view drastically changed, finally leading to the belief that Aryans as a race do not exist in India.

It is ironic to say, but I discovered the true history of India after I left India sans the theoretical interpretations common in history textbooks in India.

There are several articles and books I like. However, I am limiting myself to the books I recently read.

I just completed rereading Gandhi’s My Experiments with Truth. Although not a history book this is one of my favorite books to read. Two of the following books I read recently also stand out for their unique contributions to the history of India: Diana Eck’s India: A Sacred Geography (New York: Harmony Books, 2012) and Alessandra Avanzini’s A Port in Arabia between Rome and the Indian Ocean (3rd C. BC–5th C. AD). Khor Rori, Report 2 (Roma: L’Erma di Bretschneider, 2008).

I do not watch movies regularly; however, I have some favorites that I can suggest: The Story of India by Michael Wood is not exactly a movie but a very captivating video presentation of Indian history that I suggest for viewing especially for all historians interested in India. I also like the movies Life of Pi and Princess Mononoke that I watched recently.

History as a profession for me is “Preserver of the past, interpreter of the present, and inspirer of the future!” As such all of these three aspects are very important for me; however, as we are progressing rapidly into the global world, I would add global outlook to the above three. History is uniquely suited to providing and nurturing the global outlook through the study of human past. So I would say these are the four things I value most about history profession.

The AHA gave me the opportunity to join a society representing history as a profession. The AHA helped connect with historians across a broad spectrum, share, debate, and collaborate with colleagues on multiple aspects of history. Another important purpose for joining the AHA is becoming a part of a great tradition.

My favorite AHA annual meeting was in San Diego in 2010. I presented and met a number of historians working on Indian history. It was a very intellectually stimulating and also humbling experience.

I am passionate about nonviolence and environmental conservation. I read, write, and serve these causes whenever I have an opportunity. One of my articles to be published this year, Himalayas: An Environmental, Economic, and Political Outlook, examines the potential dangers of economic development in the Himalayas that is contributing to the environmental destruction and geo-political tensions.

History is an unending record of human journey on this earth. I am fortunate to be part of recording this journey and thankful for the opportunity to work with so many of my eminent professional colleagues in continuing this legacy. Thank you AHA!