Daniel Geary is Mark Pigott assistant professor of US history, Trinity College, Dublin. He lives in Greystones, Ireland (just outside Dublin) and has been a member of the AHA since 2003. 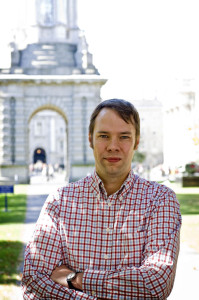 You would think it had to do with my hometown. I grew up in historic Williamsburg, Virginia. In fact, for years at my parents’ behest I donned colonial costume and played the snare drum in the Colonial Williamsburg Fife and Drum Corps. Actually, I didn’t like playing in the corps and was turned off by Colonial Williamsburg’s version of history. For example, in order to create an aura of authenticity, horse droppings are left in the middle of the road. As a drummer who had to march straight ahead, I spent hours of my life cleaning my shoes. Well, it turns out that in colonial times they cleaned after their horses! I didn’t know that when I was marching, but I was always skeptical of the sentimental, patriotic version of history told at Colonial Williamsburg. Perhaps my interest in history developed from a desire to explore the more complex and contentious reality that lay behind the national myths to which I was daily exposed in my hometown.

At the moment, I am finishing a history of the Moynihan Report controversy, due to be published in 2015 by the University of Pennsylvania Press for the 50th anniversary of the Moynihan Report. Named after its author, Daniel Patrick Moynihan, then an official in the Lyndon Johnson administration, the report claimed that the “damaged” family structure of many African Americans as reflected in out-of-wedlock births and female-headed families would hinder efforts to achieve racial equality. It catalyzed political and intellectual debates around intersecting issues of race, gender, poverty, the role of the federal government, and the family. My book explores the writing and reception of the report to better understand how Americans have talked about these issues since the 1960s.

Much has been written about the Moynihan Report, but most historians have focused on establishing what Moynihan “really” meant. What strikes me is the ambiguity of the report and the very different ways in which it has been interpreted. At different times and to different people, it has served as a symbol of activist liberalism, of racial self-help, of illegitimate white authority to define African American social life, and of patriarchal gender ideals.

I decided to write my book after conducting research in the Moynihan Papers at the Library of Congress for a different, now abandoned, project. There I found a goldmine of materials that had never been used, including an unpublished book manuscript in which Moynihan elaborated on his views in the report and hundreds of letters from ordinary Americans expressing their reactions. My book relies on an abundance of fresh evidence from this and other sources.

I also enjoy working on smaller projects on a wide range of issues. This fall, I will publish three shorter pieces on very different subjects. One is about an American intellectual who fascinates me, the sociologist David Riesman. My article in Modern Intellectual History uses Riesman’s changing reactions to the New Left of the 1960s to explore splits that developed within liberalism during that period. In that sense, the article dovetails with my Moynihan Report book. I had an interesting experience while writing this article when I visited Brattleboro, Vermont, on a weekend holiday. Riesman owned a dairy farm there where he spent his summers, and I thought it might be fun to see it. I went to the local history society where a helpful volunteer and I tried unsuccessfully to find the farm’s address in old phone books, directories, and newspapers. I expressed my surprise that Brattleboro had little record of Riesman, the famous Harvard professor and author of the massively bestselling The Lonely Crowd. The volunteer replied, “Well, he may have been well-known around Harvard, but here he was just another dairy farmer.” That was a humbling reminder for me of American intellectuals’ limited social reach.

Another article I am publishing this fall is about the segregationist Citizens’ Councils and their responses to European decolonization in Africa. I wrote that piece with my wife, Jennie Sutton, which was a great experience. Like a lot of historical research, our article developed serendipitously. While researching how the Citizens’ Councils responded to the Moynihan Report, I was surprised to notice that their publication The Citizen had many articles about Africa. I showed them to Jennie, who studies US-Africa relationships. We decided to combine our expertise and write a paper that we presented at a conference at the Roosevelt Study Center in the Netherlands, a great center for American history in beautiful Middelburg. The conference volume will be published this fall by the University of Kentucky Press (Cornelis A. van Minnen and Manfred Berg, ed., The US South and Europe).

The final essay is about Johnny Cash’s prison records and the politics of country music. It uses Cash’s classic albums, Live at Folsom and Live at San Quentin, to challenge the notion that country music of that period necessarily aided the politics of conservative backlash. It will appear in the next issue of Daedalus. Even though I have taught American music for many years, this publication will be my first in the area. I really enjoyed writing it and hope to do more research on popular music. If you told me 20 years ago when I was a teenager that I would publish an essay on Johnny Cash, I would have thought that was pretty cool.

I don’t think my interests have changed in any fundamental way in the decade since I was in graduate school. I remain basically interested in the interconnections of ideas, culture, and politics in the 20th-century US. If you ask me again in another decade, though, my answer may change. I always admired one of my professors in graduate school, Michael Rogin, because he started out as a political scientist but wound up as a film scholar; his interests were so wide-ranging that no simple label could ever capture his work.

Michael Foley’s recently published Front Porch Politics (Macmillan) is an excellent study of social activism in the US in the 1970s and 1980s that challenges common conceptions of that era as depoliticized when compared to the 1960s.

For those interested in intellectual history, the Society for US Intellectual History has a great blog that has been around for several years with many stimulating posts and debates: http://s-usih.org/blog.

I think historians play a really valuable role in helping our society reflect critically on itself. It is a disturbing prospect for our future that history, like the humanities more generally as well as serious journalism and publishing, is increasingly starved of the resources it needs for survival.

To be honest, I probably joined initially so that I could attend the annual conference and interview for jobs there. Over time, however, I have developed a particular appreciation for the role the AHA plays as an advocacy organization that pushes for the programs that historians need to do our research and teaching and that our society needs to enhance its understanding of itself.

I am most passionate about my family, especially my new love, my eight-month-old son, Oscar. I have long been active in movements for social justice, especially those devoted to more equal distributions of wealth. For fun, I love watching baseball, especially my favorite team, the St. Louis Cardinals. I love drinking Irish stout and eating pulled-pork barbeque (though not necessarily in the same meal!)

My career and life took an unexpected turn when I moved to Europe in 2005 to teach US history on a permanent basis. I taught for three years at the University of Nottingham, England’s most vibrant center for American studies. I now teach at Trinity College in Dublin, which is a really fantastic place to teach and has one of the best history departments in the world. There are disadvantages to teaching US history abroad, such as lack of access to library resources and difficulties in attending major American conferences such as the AHA. The personal disadvantages, in terms of distance from family, friends, and home culture, are even greater. However, perhaps because of its small size, there is a wonderful community of US history scholars in Europe, a few of whom are expat Americans like myself. As the job market continues to deteriorate in the US, I would expect more US historians to try their luck in Europe as I have, even though universities here are under many of the same pressures as American ones are. I definitely think living abroad has given me a different perspective on US history.