Making the Best of the Worst-Case Scenario

How One Museum Navigated COVID-19

Well, here we go,” I thought on the night of March 11, 2020. Alerts and notifications poured onto my phone screen after the NBA decided to suspend its season. In the days that followed, it became clear that the entire world was heading for a similar suspension. 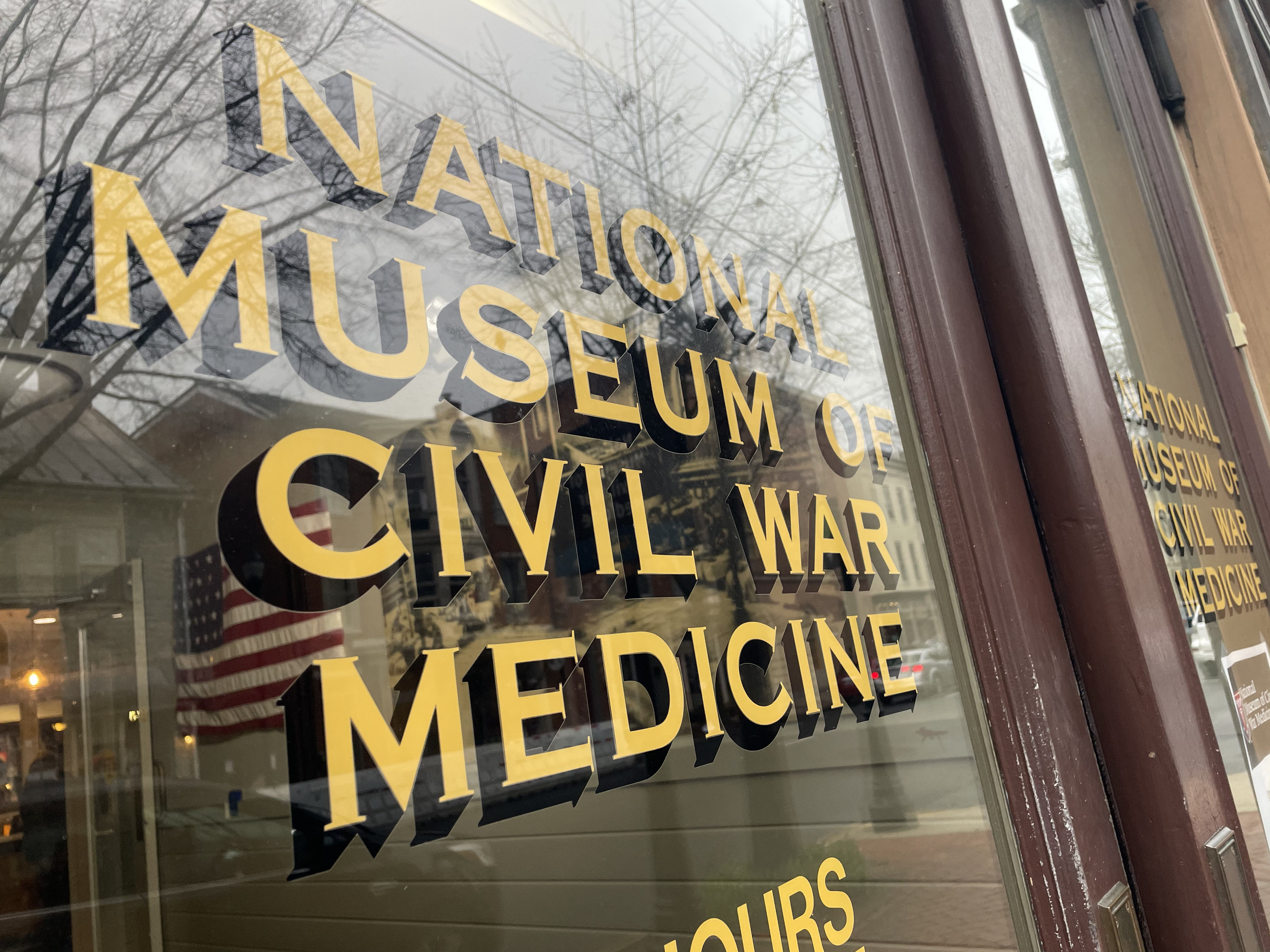 At the National Museum of Civil War Medicine (NMCWM) in Frederick, Maryland, we were uniquely positioned to contextualize this new global health emergency. Because the American Civil War was one of the worst health emergencies in United States history, the NMCWM embraces opportunities to connect the past to the present, especially around issues of health, medicine, and conflict.

Growing concerns about a pandemic served as the backdrop for a controversy closer to home. In January 2020, while we read about the new virus in Wuhan, China, the NMCWM launched a new logo and brand identity. This is always a momentous task for a cultural organization, but in our case, it was particularly controversial. The previous logo included the American flag and a Confederate battle flag, with a Rod of Asclepius between them and our name below. This logo, which appeared on everything from T-shirts to our front door, stoked intense debate, excluded some visitors, and attracted press attention, all of which distracted from our mission. We spent 2019 working with a graphic design consultant to obtain public comments and poll our audience about a new, more inclusive identity for the museum.

On January 15, we released the new logo design to a torrent of abuse on our social media channels. This new logo, a blue, red, and gray shield emblazoned with the Rod of Asclepius above three stars, emphasizes the medical history we share, while embracing a more contemporary look. However, quite quickly, the negativity subsided, and we believe that this rebranding proved crucial in some of our 2020 successes. Instead of visitors—in-person or online—being introduced to the museum with an image of a Confederate battle flag, they encountered an organization focused on the crucial lifesaving innovations that emerged from the Civil War.

As we responded to the roiling online debate over our new branding, events around the world and in the United States quickly spun out of control. In February 2020, despite balancing numerous regular responsibilities, the museum’s six-person education team began discussing what would happen if the shutdowns taking place first in China, and then in Italy, became necessary in the United States. This seemed alarmist at the time, but a gnawing sense of dread hung over these conversations as February creeped toward March. We focused our planning conversations on one question: How could the NMCWM provide understanding and context for a health crisis in our own era while protecting our staff? As we thought about the worst-case scenario—a forced shutdown of our three locations—we homed in on our digital presence as the best way we could communicate with our audience and fulfill our mission. Although the museum has prioritized social media since 2015, during the pandemic it became our primary focus. Even before Maryland ordered museums and cultural sites to close, we shifted our digital strategy to focus on how Civil War medicine could help make sense of the current moment.

Like much of the rest of the country, we shut our doors on March 17, 2020, unsure when we would be able to reopen and in what capacity we would be able to host visitors. In the meantime, our team continued to ramp up our digital programming, social media presence, and newsletter use.

Growing concerns about a pandemic served as the backdrop for a controversy closer to home.

While the NMCWM and our two satellite sites—the Pry House Field Hospital Museum on Antietam National Battlefield and the Clara Barton Missing Soldiers Office Museum in Washington, DC—were closed, we found one way to continue with our team’s work: livestreaming. We had used Facebook Live and YouTube in the past but had never truly harnessed the ability to livestream. Our digital offerings quickly grew from a video or two per week to a regular programming schedule, broadcast on Facebook Live and later uploaded to YouTube.

We decided on a two-part strategy in our video offerings. One group of videos would mirror the programs we typically held in our museum spaces. These included conversations with historians and authors, museum tours, and conversations with the education staff. We reimagined them for video, and with that confronted the growing pains of livestreaming—bad WiFi connections, sound and lighting issues, and more.

Additionally, NMCWM executive director David Price began hosting events called “Hope Through History,” which drew on our network of supporters to have conversations about medical history informed by the present. Via Zoom and Facebook Live, we hosted conversations with a retired infectious disease doctor turned living historian, the owner of a Maryland distillery who began making hand sanitizer for first responders, and others.

Although we initially planned these videos as a stopgap measure, we were amazed to see a dramatic increase in membership and donations to the museum. Early in this process, we created consistent messaging about how viewers watching our free online programming could assist in our efforts and support us through the shutdown. Our viewership for these video programs grew as we maintained a regular schedule and made content relevant to events in 2020; for example, we held presentations about Civil War field hospitals the same week that several American cities announced the construction of temporary hospitals in April. These programs connected with our audience, and the questions they asked highlighted how well we demonstrated that Civil War medical care had become relevant in our own time.

We maintained a robust digital programming schedule through early summer as the shutdown continued, and our digital platforms have experienced sustained growth since we closed last March. The museum’s social media accounts have seen a 20 percent growth in followers, and the videos we have produced have been viewed more than 200,000 times. A handful have even aired on C-SPAN’s American History TV.

In mid-June, with guidance from local and state health authorities, we began taking steps toward reopening. As we prepared, we recognized that the safety of staff and the public was paramount. Comfort levels among the staff and volunteers, many of whom are over age 65, varied widely. However, we found these transitions possible to navigate with transparent communications among the small and close-knit staff. We stocked vast quantities of hand sanitizer and cleaning supplies, installed plexiglass to protect museum staff, drafted schedules for regular thorough cleaning, and required that visitors wear masks in accordance with Maryland health restrictions. Staff expressed concern about the mask mandate, especially when videos and social media posts emerged of mask requirements leading to arguments and confrontations. Our organization’s leadership developed a plan should a visitor become aggressive or violent as a result of this mask mandate. Fortunately, visitors have almost universally accepted this requirement, and no major issues have arisen.

We were amazed to see a dramatic increase in membership and donations to the museum.

Our initial plan was to open the museum on Fridays, Saturdays, and Sundays for walk-in tours. We also allowed groups to schedule appointments on days when we were not open to the public. During the summer of 2020, we saw a return to about 40 percent of our pre-pandemic attendance. This schedule served us well until cases and deaths spiked in the fall of 2020. At that time, we began to roll back our reopening and eventually closed again just before the holiday season. In January 2021, we reopened for appointments at the NMCWM, but our two satellite locations remained closed, as neither allows for easy social distancing. We anticipate moving again toward an advanced reopening plan in spring 2021.

The NMCWM did none of this work in isolation. Throughout the year, we paid close attention to what our colleagues at other institutions created and how they navigated reopening their sites. Among the museums we worked closest with during the year was the Seminary Ridge Museum in Gettysburg, Pennsylvania, which also highlights the intersection of emergency medicine and Civil War history and is located less than 50 miles away. We cohosted programs, kept each other apprised of reopening strategies, and maintained an open channel of communication on a variety of pandemic-related issues. Out of a terrible situation, our two institutions and staffs forged a close bond that will carry forward.

The pandemic slowed the NMCWM’s momentum on major projects. We could not, for example, move forward with planning an update to the museum’s exhibit spaces. However, we are still implementing changes to our museum’s interpretation of Civil War medical history, many informed by lessons from 2020.

All told, the National Museum of Civil War Medicine has weathered the storm. We escaped the worst of the layoffs that hit many museums and were able to expand our audience. Our unique mission and collections meant that we were well positioned to pivot to pandemic-related programming at a moment when the public was hungry for just such history. The growth of our digital programming has been a net positive, expanding our reach and the public’s awareness of our institution. As we grieve for all that we have lost, personally and as a field, I am confident that the NMCWM will move forward better prepared to respond to our audience and adapt to a rapidly changing world.

Jake Wynn is director of interpretation at the National Museum of Civil War Medicine. He tweets @JayQuinn1993.