Three Historians Bring the Chippendales Dancers to Your Earbuds

Many of the most popular shows in history podcasting are made by journalists as part of their work with major media outlets. Shows like Slow Burn from Slate and Throughline from NPR feature journalists doing deep dives into past events. 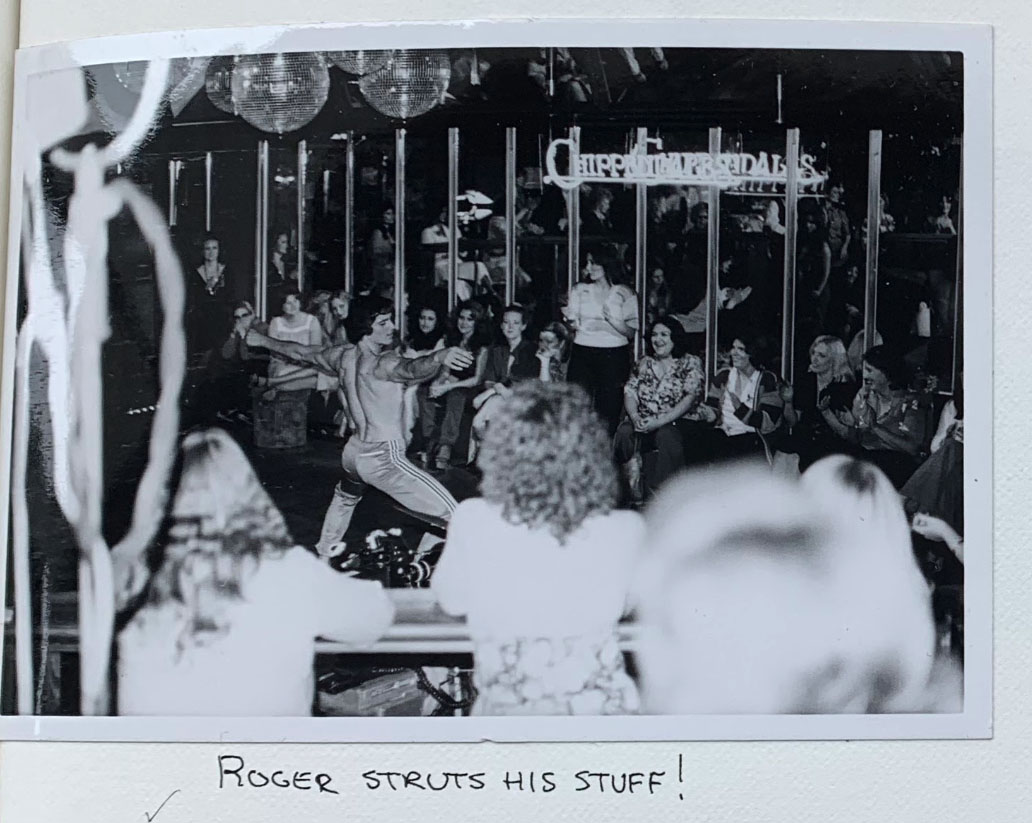 There is no central Chippendales archive, so research for Welcome to Your Fantasy relied on a number of personal collections in building the story. Courtesy Logan Clarke

But a recent podcast production from Pineapple Street Studios and Gimlet Media proves the exception to the rule. Hosted by Natalia Mehlman Petrzela and co-produced by Neil J. Young and Nicole Hemmer, Welcome to Your Fantasy tells the salacious history of the Chippendales male striptease show, from the founding of the Chippendales Club in 1979 through their international fame, touring productions, and the ubiquitous Chippendales Calendar. Digging up a tale of lust, excess, and even murder, the Spotify Original podcast reveals just how sexy history can be.

Petrzela, an associate professor of history at The New School, stumbled upon the Chippendales story by accident. A few years ago, she was invited to appear in a European television documentary about the Chippendales and the politics of consent in the 1980s. In doing preliminary research for the show, Petrzela was struck by three things, as she told Perspectives: “Chippendales was founded by an Indian immigrant, feminists were fighting in the pages of the Los Angeles Times about whether or not the male strip show advanced or hindered women’s liberation, and the founder—at the height of the brand’s success—had his partner, a children’s television producer from New Jersey, murdered.” When she posted about these finds on social media, a friend suggested that it could make a good podcast.

Petrzela is not new to podcasting. With Young, a historian and contributing writer for The Week, and Hemmer, an associate research scholar with the Obama Presidency Oral History Project at Columbia University, Petrzela has been co-hosting Past Present Podcast since 2015. On Past Present, the three historians gather weekly to give historical context for today’s politics and culture. But Welcome to Your Fantasy was a new format for the team, and Petrzela turned to Young and Hemmer to help her refine the concept for the show. They pitched the story to media outlets, and Pineapple Street Studios signed on to make Welcome to Your Fantasy in early 2019, with Petrzela as host and co-producer and Hemmer and Young serving as consulting producers. Spotify and Gimlet Media later signed on to make the podcast a Spotify exclusive (it will become available on all podcast platforms this summer). It took two years for the three historians—along with a team of two executive producers, three producers, two editors, an engineer, and a fact-checker from Pineapple Street—to take the project from concept to release. This process required that Petrzela, Hemmer, and Young take on a variety of behind-the-scenes roles in researching, writing, and producing the show.

It took two years for the three historians to take the project from concept to release.

Because of his location in Los Angeles, the original home of the Chippendales club, Young focused on conducting research and doing preliminary interviews with many of the subjects. He found that finding the Chippendales in the archives was “very much a needle-in-the-haystack” search. There is no centralized Chippendales archive, so Young spent weeks combing through archives, both in-person and online. At UCLA’s Film and Television Archives, Young watched every single tape they had of the Chippendales’ multiple talk-show appearances in the 1980s and 1990s, finding episodes of The Phil Donohue Show and The Sally Jessy Raphaël Show. He watched hundreds of hours of local television news broadcasts, looking for any possible coverage of the Chippendales’ LA club. These lengthy searches yielded relatively few results, but Young says, “Even that was an important discovery in itself. We realized that although Chippendales eventually became a world-famous brand, it certainly didn’t start out that way.”

While working on their weekly podcast requires a lot of quick research, synthesizing of sources, and the ability to make arguments in conversation with Hemmer and Petrzela, Young likened this research process to “more like writing a book.” The Chippendales project required “a ton of archival research, although far more of it focused on audio and video records than what most historians usually consult; reading lots of primary sources, from personal memoirs to newspaper accounts to a mountain of legal documents; consulting secondary literature on the big historical themes our show explores; and, of course, lots and lots of oral histories.”

Those oral histories form the backbone of the audio project. Young and other producers often conducted preliminary interviews with those who experienced the Chippendales from the start: the dancers themselves, other club employees, a Chippendales tour manager, the man who brought a racial discrimination lawsuit against the club, even neighbors who still live in the blocks surrounding the original location. Along with their memories, interviewees often shared photographs, memorabilia, even costumes from the show with the podcast producers. When they were ready to go on tape for the podcast, Petrzela conducted most of the more than 60 interviews for the show.

Armed with Young’s archival research and Petrzela’s interviews, Hemmer got busy writing episode scripts. Along with cohosting Past Present, her podcast experience includes creating A12: The Story of Charlottesville in 2018, a six-episode show about the 2017 Charlottesville white supremacist rally. She describes A12 as “such a passion project for me,” which came from living in Charlottesville and covering the violence for national news outlets. “It was my first experience conducting audio interviews—I spoke with around 30 activists, city leaders, and historians—and my first time writing and editing a narrative podcast,” experience that served her well on Welcome to Your Fantasy. In 2020, she also began cohosting The Day in Esoteric Political History, a short-form podcast that publishes three times a week.

Podcasting let the team get closer to their audience.

Welcome to Your Fantasy is a storytelling podcast, with scripts crafted in a writers’ room where Hemmer was often the only historian. Though she has published a monograph and academic articles, and writes a weekly column for CNN, Hemmer says that working on the show “was a process of learning an entirely different form of writing.” As she tells Perspectives, “I wrote the first draft of most of the episode scripts, but the writing process was almost entirely collaborative.” In weekly meetings at the Pineapple Street offices in Brooklyn, New York, Hemmer and other producers worked to refine and rewrite scripts, sharing them with Petrzela, Young, and others at table reads, when the staff would gather to workshop the script. At this stage, Hemmer says, “Everyone would pitch in, throwing out suggestions for rewrites and jokes and turns of phrase. It was a long process—we wrote something like 26 versions of episode 1!—and the most collaborative writing process I’ve ever been a part of.” Throughout production, their expertise as historians was essential. “Pineapple saw having historians on the team as a huge asset. It was the other producers who cut story lines that seemed too driven by salaciousness, and who kept coming back to us for more analysis and more history,” Hemmer says.

After episodes were drafted, Petrzela’s role as host took center stage. While Past Present takes the form of a chat among friends, the recording process for Welcome to Your Fantasy was a different beast entirely. As Petrzela says, recording the episode narration “took many, many hours, and was a huge learning curve for me.” She would read the scripts multiple times, “in multiple tonalities,” while being coached by the producers. “The show is scripted, but it’s supposed to sound relatively natural, so I would also always do a few takes ‘in my own words,’ which is harder than it sounds!” Once the narration was recorded, a producer would mix in tape from the archives and interviews, along with music. Then the team would listen to audio drafts of each episode, with Petrzela re-recording sections that needed revision. As she says, “It was an intense, and intensely collaborative, process.” Lastly, the audio engineer would finalize the episodes with sound design, music composition, and mixing.

Neil J. Young, Nicole Hemmer, and Natalia Mehlman Petrzela have been podcasting together since 2015. Eleanor Kagan

For all three historians, the experience of working with Pineapple Street was quite different from their previous podcasts. “Our partnership provided crucial support on our historical research, kind of like having several extremely engaged and talented RAs, but also on aspects in which we as historians have no training—from writing a script to scoring music to designing the cover art to the marketing campaign,” Petrzela says. “There exists a popular notion that anyone with a mic and a good idea can make a podcast, and while that’s technically true, making Welcome to Your Fantasy is proof positive of how much collaboration, expertise, and resources are required to make an elaborate show like this.”

Many historians who stumbled upon this story would have written a monograph, or perhaps have shown it (in all its glory) in a documentary. But podcasting let the team get closer to their audience. As Hemmer says, “It’s an odd choice, in a way: we’re talking about male stripping, which is a very visual art form! But podcasting offers a level of intimacy and texture that’s different from written work or even film. It plays right into your ears, forming a bond between the host and the audience that’s unlike other genres.”

For Petrzela, the podcast allowed for a different kind of storytelling: “I actually think that stripping out the visual aspect, especially in our interviews of the dancers, whose careers had been largely defined by their appearance, allowed us to explore them as more complex, multidimensional figures.”

Young agrees, saying, “Telling it in audio form allows listeners to not be as distracted by the obvious things—images of sexy stripping men and of dramatic crime scenes—but rather to focus more on the incredible, surprising, heartbreaking, and, oftentimes, infuriating people and events that fueled this phenomenon.”