From Jazz Clubs to Barbershops and Museums

In October 2020, Soul became the first Pixar animated film to feature a Black lead. Soul is not a historical film, but it draws on Black history, and the story is grounded in Black experiences. The creators understood that they had to get the film right. 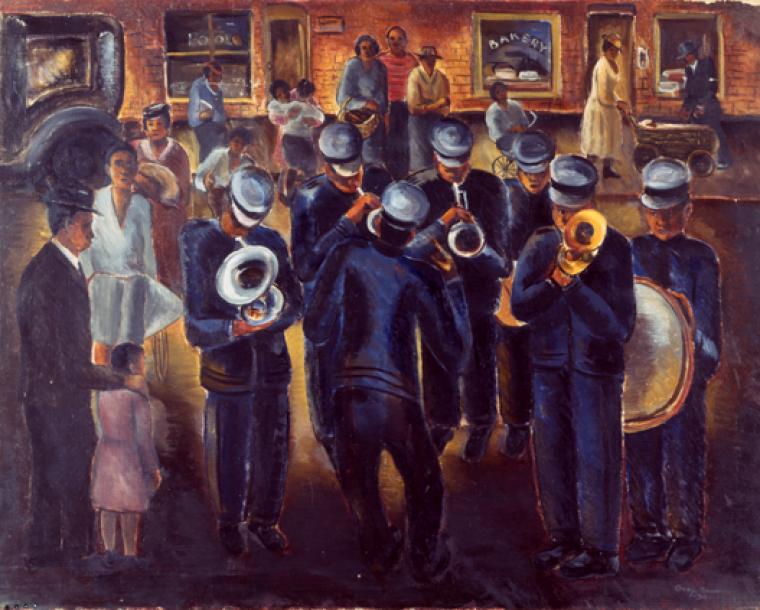 Soul follows Joe Gardner, a charismatic Brooklyn-based middle school band teacher who dreams of becoming a full-time jazz musician. Voiced by Jamie Foxx, Joe is disciplined and ambitious, but his pursuit takes him on an existential detour. After an accident, he ends up in the “Great Before” dimension, where he befriends an unborn, blob-shaped soul named 22 (voiced by Tina Fey). When he returns to Earth, he ends up in the form of a cat, while 22 occupies his body. Soul is the story of Joe’s journey, but it’s also a story about humanity and life, of finding purpose and passion.

And yet Soul began without Joe in mind. Director Pete Docter told the website Polygon that he knew that the film would explore the balance between personal ambition and a simple life, but he was less certain how it would play out on the screen. Docter, co-screenwriter Mike Powers, and producer Dana Murray considered different possibilities, but ultimately decided to tell the story through a jazz musician’s experience. They reasoned that music is a common passion, and viewers could likely relate to it. When Kemp Powers, who saw a bit of himself in Joe, was brought on board as co-director and co-screenwriter, Soul was well underway.

Recognizing the centrality of Black history and experiences to the film, Pixar’s creative team consulted a wide range of experts: jazz musicians, artists, community activists, barbershop owners, and historians. Through the Office of Strategic Partnerships at the Smithsonian’s National Museum of African American History and Culture (NMAAHC), curator Mary Elliott and museum specialist Timothy Anne Burnside joined the team of historians tapped by Pixar for their expertise. Perspectives recently spoke with Elliott and Burnside about their roles in Soul’s development.

When Elliott first took the Pixar team on a tour of the NMAAHC’s Slavery and Freedom exhibit, she emphasized the power of storytelling across different media. The exhibit carefully weaves together objects, images, and voices. It illustrates the shared histories of American slavery and freedom, while underscoring how the individual experiences of Black men and women varied. In Elliott’s view, the Pixar team took on a similar task with Soul. They needed to consider how they would depict the Black community without portraying it as monolithic or perpetuating harmful stereotypes. For Soul to resonate with its audience, Joe also had to be relatable. So, as Elliott recalled, the team asked themselves, “How do we use the African American lens to connect on universal themes, in this case, of humanity and community?”

Burnside’s work is concentrated on the top floor of the NMAAHC, where the Musical Crossroads exhibit is located. Over the course of two exhibit tours, she showcased the history of Black music for the Pixar team, highlighting artifacts and images that would serve as inspiration for the film: jazz clubs, jewelry, elements of fashion. The group also had conversations about how best to tell stories about a community to which they did not belong. Like Burnside, many of the people involved in Soul are not Black. They discussed the importance of grounding these stories in real voices from the Black community. The goal “was to elevate those stories and make sure they are being told truthfully.” The Pixar team agreed. They traveled to New York City, visiting locations that would serve as the basis for several of the film’s scenes, and spoke to locals about their experiences as musicians, Brooklyn residents, and members of the Black community.

The group had conversations about how best to tell stories about a community to which they did not belong.

The team’s thoughtful work paid off. In March 2021, Soul received three Oscar nominations for Best Animated Feature, Best Original Score, and Best Sound. The film’s animators received praise from media outlets for the care that went into illustrating the Half-Note Jazz Club (based on New York City’s Blue Note Jazz Club), the familiar barbershops and subway stations, and the texture of Black hair. The writers were applauded for their just-right, witty delivery of the core message: It’s easy to get caught up in our personal ambitions, but the meaning of life is in our relationships with others and the joy of everyday moments.

Still, Soul has not been received without criticism. Reviewers have argued that Soul was primarily produced for non-Black audiences, and they have questioned the decision to have Joe spend the majority of the film outside of his body. Elliott recalled the segment where, due to an accidental switch-up, 22 ends up on Earth in Joe’s body. Elliott noted that “[22] is in the body of a Black man. In that body, she has the freedom to enjoy life, look at the trees, and look at the families, and just be. The Black man didn’t have that sense.” Aside from exploring racial identity, Soul also touches upon familial ties and cultural expectations. In scenes between Joe and his mother, Libba, we see tough love as she pushes Joe to pursue a more stable career, which might remind viewers of their own relationships. Behind this, there is also an unspoken history at play, as Elliott observed: “Do [African Americans] have the luxury to dream big, when historically, it was about having to put your head down and go to college?” Critics suggest that this allowed non-Black viewers to more easily look past race, therefore increasing the character’s relatability at the expense of his identity and experiences.

Despite these criticisms, Soul manages to deliver an artistic commentary on humanity, built upon decades of Black history, that a global audience can relate to. It does so through the lens of a Black protagonist and a strong sense of history and place. Viewers will pick up on hairstyles and hip-hop posters in the background, small references contributed by the historical and cultural consultants. New Yorkers will nod at the sidewalk grates and thin pizza slices.

Pixar’s careful approach in developing Soul is becoming more common in today’s entertainment industry. Although the Los Angeles–based consulting firm History Studio did not work on Soul, co-founding partner and Charles & Mary Beard Distinguished Professor of History at Rutgers University Erica Armstrong Dunbar spoke with Perspectives about the importance of accurate storytelling through film and television.

When Dunbar and colleagues Heather Ann Thompson and Becky Nicolaides first started History Studio, they envisioned a company that would “bridge together the worlds of academia and entertainment.” Dunbar and her colleagues had previously been approached to offer insight into various projects, but the interactions were loosely constructed. In History Studio, they saw an opportunity for historians, led mostly by women, “to have a seat at the table, and no longer in a haphazard way.” A lot is at stake. As Dunbar explained, “The entertainment industry is the most critical space in which the public sees, understands, and gets their history. That’s how they understand America as a nation, or even the world.”

For a story to click with an audience, it must at least get the facts straight.

History Studio relies on a database of hundreds of scholars whose expertise spans the globe and various time periods. Depending on the client’s request—which can range from a sensitivity read to a comprehensive film project—History Studio connects the client to scholars with relevant expertise. Dunbar added, “We are trying to create a change in the industry, to make certain that we are not brought to the table later on but are involved from the beginning to help construct these worlds.” Their team believes that historical scholarship should be more than a last-minute fact check; it should instead help shape the ideas that will eventually appear on screens.

History Studio’s work captures the relationship between historical scholarship and popular entertainment. Hollywood directors and screenwriters remain predominantly white and male, but the stories they tell, and the actors who portray these stories on our screens, have diversified in recent years. Audiences have also diversified, and the entertainment industry is becoming more accountable to its viewers. As Burnside put it, “People catch inaccuracies all the time, those little details connected to community stories that locals are familiar with. Missing the mark in that regard makes people feel like their histories aren’t important enough to get right.” At best, inaccuracies are a distraction for those who notice them. At worst, such mistakes potentially reflect a degree of ignorance that viewers may read as derogatory. With streaming platforms adding to the massive amount of entertainment produced each year and social media allowing commentary from the masses, these inaccuracies can be identified at any time and shared on an enormous scale. For a story to click with an audience, it must at least get the facts straight. Producing a project for a hyperconnected world can seem daunting, but historians know that authentic storytelling is possible and that inaccuracies are avoidable.

Soul was originally scheduled to hit theaters in June 2021. Due to COVID-19, the Walt Disney Company pushed the release date up by six months and made the film available on the Disney+ streaming app. As the pandemic kept viewers inside, it became clear that film and television is now a go-to place for the public to engage with historical content. As Dunbar remarked, it’s precisely because of that ease of accessibility that “we need the same engaged presence that’s present in the museum world. This is the next frontier.”