The book intrigued me as soon as I heard about it. When I was able to see it for myself, I was thrilled. It is one of the most unexpected, astonishing pieces of material history I have ever seen: a collection of hundreds of fabric swatches sewn into a scrapbook, with detailed descriptions noting when each item was worn, for how long, and to what events. It includes drawings, too, some showing the entire outfit, others just details of sleeves or collars, and even some illustrating how the article of clothing evolved over time. 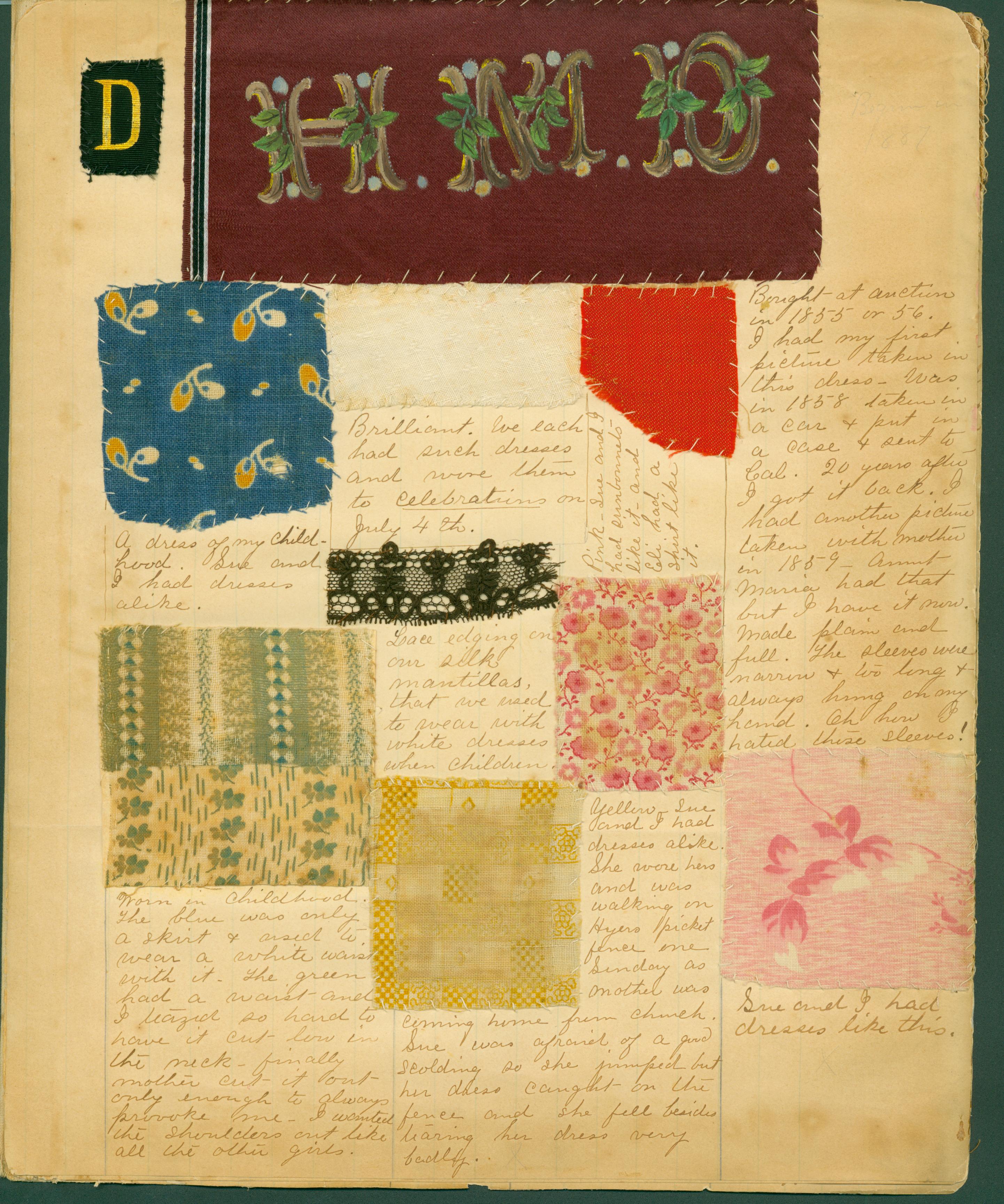 Hannah Ditzler Alspaugh was the daughter of a farmer who moved to Naperville, Illinois, from Pennsylvania. She was not rich or socially prominent, but became an artist, teacher, librarian, and is considered Naperville’s first historian. She started the scrapbook in 1887, but the array of fabrics dates from before the Civil War through the 1900s. Although many women kept such scrapbooks in the late 19th century, Alspaugh’s is unusual because of the span of time, her meticulous documentation, and the voluminous drawings showing how the material was used. She seems to have had a true historian’s desire to record everything that she could recall.

Her notes for many items come with distinct memories. One reads, “Wore it to have group picture taken 1876. In 1883 Jennie helped me make it over again Overskirt drapery and changed Basque. In 1895 had a silk front and made into a tea gown. Silk sleeves. Had many a compliment. Wore out in 1900.” Entries like this one give us insight into the preciousness of clothing in an era before “fast fashion.” Items were made, remade, treasured, and worn until they wore out. Certain types of precious fabrics were used for changeable parts of the clothing to extend their lifespan. Some fabric pieces eventually made their way into quilts, to be of still further use. This scrapbook reveals a great deal about clothing styles as well the colors and textures available at any given time. As such, it offers insight into 50 years of fashion.

Some entries are more personal: One tells of Alspaugh and her sister excitedly making their “first white dresses,” which they worked on “day and night,” to wear in a parade. In another instance, she laments, “I tried so hard to have [it] cut low in the neck . . . I wanted the shoulders cut like all the other girls.”

In addition to its contribution to the history of costume and life in the late 19th century, the scrapbook provides a glimpse into the mind of a true storyteller; a woman determined to make her life part of the historical record. Hannah also penned several diaries about life in early Naperville. These are all part of the Naperville Heritage Society collection at Naper Settlement.

Hannah had a remarkably long life, dying at the age of 90 in 1948. She lived through some of the country’s most momentous times and, through it all, diligently recorded her world in amazing detail. She has given us an invaluable insight into everyday things that might have otherwise been lost to history.