When History Is Not Good Enough for Hollywood: Selma, Lyndon B. Johnson, and Martin Luther King Jr.

Get it right; and don’t be boring.” That is the advice I give to students about writing history. I stole it from Pulitzer Prize–winning former New York Times reporter Charlie Leduff after hearing him on the radio (thank you, Terry Gross). I wish I could do it myself. It is rare to come across a story about the past that is both painstakingly accurate and enduringly entertaining, especially to a mass audience. The dilemma is worse for filmmakers whose movies need to make money for investors. How much of an actual story, then, can a filmmaker change before losing the trust of an informed audience?

The reaction to the emotionally powerful film Selma has shown that even in an age of “truthiness” (to borrow from Stephen Colbert), many people take historical accuracy quite seriously. Complaints about the film have gotten almost as much attention as the film itself. The director, Ava DuVernay, has offered a standard filmmaker’s defense. It is a two-hour work of art, not a documentary. As she told the New York Times, historical accuracy is a “gray area” that depends on an individual’s perspective.

She is right. Gray areas give life to history. A major problem with her film, though, is that it does not present its history as gray. Its voice is authoritative and crisp. The film uses real events, real locations, real narratives, and the real names of real people to establish a spirit of authenticity. Its mood clearly says, “This is genuine. I am 1965.” Its depiction of Lyndon B. Johnson and his relationship with Martin Luther King Jr., however, undermines the authority of that voice by contradicting clear and easily accessible documentary evidence. (To explore parts of that documentary record, including once-secret phone calls, visit the exhibit on Selma at the Presidential Recordings Project.)

After 15 years of listening to, editing, and researching Johnson and his documentary record—particularly the White House tapes—I find the film’s take on Johnson awkward at best and laughable at worst. I am guessing that the historical Johnson would wonder why he and King are yelling at each other in the film and telling each other things they already knew very well, while at the same time saying the opposite of what they had just said in their actual phone calls, public statements, and press reports. Johnson, however, may have appreciated the director’s claims of artistic license, as he certainly was prone to choose the don’t-be-boring part over getting-it-right when recounting stories about his own life.

The film’s portrayal of Johnson’s voting rights efforts might have given him his fourth heart attack had he been alive to see it. For the film’s plot to work, the viewer has to believe that Johnson was visibly angered by Martin Luther King Jr.’s asking for voting rights for black Americans, that Johnson adamantly and repeatedly refused to support any voting legislation until he realized he did not want to be on the same side of history as George Wallace, and that he ordered the FBI to try to destroy King’s family just before the Bloody Sunday march to punish King for continuing to push for voting rights. 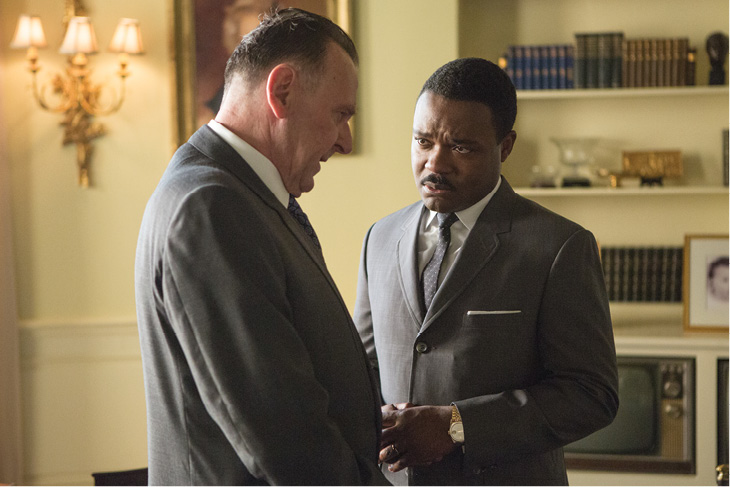 In the film’s first scene between King and Johnson, based apparently on King’s post–Nobel Prize visit to the White House on December 18, 1964, LBJ obstinately says, “This voting thing is just going to have to wait” and “This administration is going to set this aside for a while.” Johnson’s tapes show the opposite. Four days before, Johnson had ordered Attorney General Nicholas Katzenbach to “undertake the greatest midnight legislative drafting” session since the New Deal to change the laws on voter registration. “We need it pretty quick,” he added.

According to the documentary record, Johnson informed King confidentially about those efforts on December 18. Two weeks later, on January 4, he told a national audience in his State of the Union message about plans to send Congress a special message on voting rights in the next six weeks. Eleven days later, he updated King and urged him to lobby key congressional committee members to support Great Society legislation and to highlight voting rights abuses to the press. Although Johnson worried about the timing of voter legislation and the power of a southern filibuster and of “vicious forces” to bottle up the rest of the Great Society, he declared that a “breakthrough” on voting rights legislation would be the “greatest achievement of my administration.” Twice in the next eight weeks, the administration invited King to review the legislative drafts with Attorney General Katzenbach. For most newspaper reporters, the major issue involved when in the next few weeks the administration would send legislation to Capitol Hill, not if.

For the filmmakers, that history was not good enough. They chose instead to make it clear that Johnson and King were not doing those things. “I can’t do it this year,” the movie-Johnson shouted at the movie-King’s request to propose voting rights legislation. “I won’t. I told you.” In the film, Johnson called the FBI to send its secret audio of King, and King explicitly chose not to attend the Bloody Sunday march for that reason. In reality, the tape was sent three months earlier, and a later congressional investigation found no evidence of Johnson’s involvement.

In such moments and others, the filmmakers moved from making artistic choices to making things up. In doing so, they missed the chance to say something profound about race in the 1960s. To each other, friends could be mean, and enemies could be vicious, but allies had to speak nicely. King and Johnson were not friends, but cautious and cordial allies who specialized in the power of suggestion, not the harshness of ultimatum.

These problems do not doom the film. In fact, they underscore how strong it is despite its flaws, and they show how exciting history can be. History is not dead but is a ­constantly changing fight that the present has with itself. In that regard, my students have asked if this film is worth their time. I tell them: Go see Selma, and then get wrapped up in the real thing. The film is a startling reminder about why Jim Crow was so devastating and why it lasted so long. The director and most of the actors are at the top of their craft. Let their art lead you to the actual voices and visions of participants. Those students, local people, and national leaders knew how long the struggle was, and their history is not boring. The challenge to all of us lies in figuring out how to get it right as 1965 slips farther into the distance.

Kent Germany is associate professor of history at the University of South Carolina and nonresident research fellow with the Presidential Recordings Program at the University of Virginia’s Miller Center. He is the author of New Orleans After the Promises and editor of four volumes on the Lyndon Johnson recordings, including a digital edition on LBJ and civil rights.