Dissent and patriotism. Which of the two benefits one’s country and which harms it? Or, as James Grossman asks us in his column this month, are patriotism and dissent closely intertwined in some contexts? The film Selma, the subject of this month’s forum, revolves around dissent—Martin Luther King Jr. and 2,500 black and white Americans stood up and spoke out against the exclusion of millions of Americans from the very patriotic act of participating in elections. Their activism contributed significantly to a vast expansion of the right to vote—surely an outcome beneficial to the nation.

Patriotism has many definitions, Grossman reminds us, and for many, dissent is a form of patriotism because it is concerned with and geared towards the good of one’s people. I see this idea running through Islamic history as well, where exemplary people are extolled despite of or because of their dissent. That dissent is seen as righteous; it is standing up for what is right no matter the consequences.

In the course of telling his history of the world, the 10th-century Al-Tabari shows us the different ways in which dissent was met at different points in Islamic history. For example, when one governor ordered the beating of a group of men who “engaged in a wine-drinking session,” and after their beating had them paraded around the city of Medina, people protested this punishment, and one went to him and said, “They should not be subjected to this; you have had them beaten when you had no right to have them beaten, since the scholars of Iraq don’t see any harm in wine-drinking; so why are you having them paraded publicly?”1 The ruler did not object to his authority being questioned. Rather, he sent a messenger after the men to stop their punishment, and released them from prison after a day and a night. 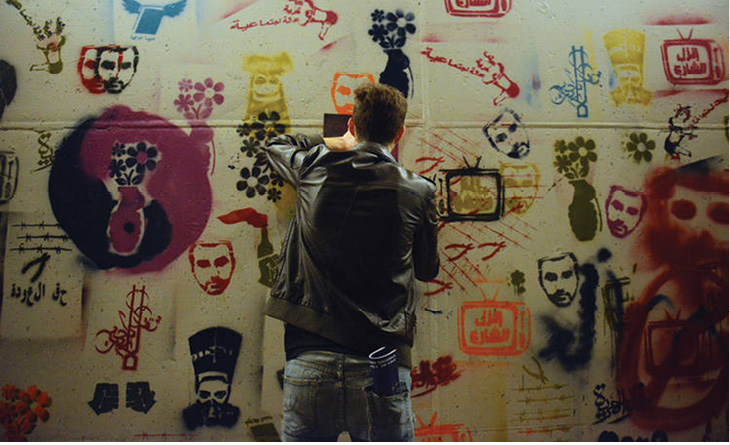 Underpass of the Eyes of Freedom at Union Depot in St. Paul, Minnesota. The Arab Arts organization Mizna produced a large-scale, Arab Spring-focused participatory art installation at the all-night 2013 Northern Spark Festival. From dusk to dawn, thousands of festival-goers offered a gesture of solidarity to Arab protesters by stencilling actual revolutionary street art from the Arab world as well as US Arab artists, evoking Cairo’s “Street of the Eyes of Freedom” near Tahrir Square.

There are many other stories of dissent in Islamic history. Ahmad ibn Hanbal, one of the founders of a school of Sunni law, was not received so well when he refused to go against his beliefs. When the Caliph Al-Mamun commanded all the scholars of the Muslim lands to espouse a certain theological position, the majority signed agreements, afraid for their lives. Some refused to sign, but when they were summoned before judges, they spoke in vague sentences that allowed for multiple meanings, not lying but not affirming the caliph’s beliefs. Ahmad ibn Hanbal, according to various accounts, was steadfast in his belief, and was willing to give up his life for it. He wrote treatises explaining his views, and was carried off to prison. His life was spared only when the caliph passed away, but he continued to be persecuted by other caliphs for his position.

In the first example, the ruler responded to dissent with an open mind and changed his course of action. In the second example, the man who stood up for his beliefs was revered by hundreds of thousands of Muslims who follow his school of law to this day. Neither man was scorned for his stance.

America has a long history of dissent, as do other parts of the world. Despite its costs, dissent has caused change and improvement in many societies. While crackdowns on dissent dominate the stories we hear, leaders sometimes listen and respond positively. And often, it’s the quiet moments of dissent that are the most powerful. After the Bloody Sunday of 1965, when civil rights marchers were tear gassed and beaten on their way from Selma to Montgomery, Martin Luther King Jr. and thousands of Americans marched again toward the Edmund Pettus Bridge. When they were stopped, they did not try to force their way through, which would have led to violence. Instead, they knelt down and prayed before turning back. To some, that constituted giving in, but others saw it as a way to stand up for what is right, to be peaceful and united.

Dissent can take many forms, as can patriotism.

1. Translated by C. E. Bosworth in The History of al-Tabari: The ‘Abbasid Caliphate in Equilibrium (Albany: State University of New York Press, 1989), pp. 15–16.

Tags: From the Editor