Of Selma and History

Earlier this month, on the same day that President Obama, civil rights veterans, and dignitaries gathered in Selma, Alabama, to observe the 50th Anniversary of Bloody Sunday, a different commemoration occurred in Washington, DC. There, Civil War re-enactors, Parks Department officials, and a more modest assembly celebrated the 150th anniversary of Lincoln’s Second Inaugural Address. That speech, delivered as the Civil War approached its close and now appraised as the apex of presidential oratory, is remembered as a healing benediction, one that counseled reconciliation following unspeakable destruction and strife. But as Gary Wills observed in 1999, the Second Inaugural was in fact more minatory than exculpatory in message. The poignant vision of a nation yearning to move past war but confronted with a Providence that might demand collective atonement until “all the wealth piled by the bondsman’s two hundred and fifty years of labor be sunk, and every drop of blood drawn with the lash, shall be paid by another drawn with the sword,” was one that Lincoln later described as “a truth which I thought needed to be told,” even as he acknowledged that its harsh impositions might prove “not immediately popular.” This last observation was more prescient than he would know, as the promises of Reconstruction wilted and went dormant, before a chilling campaign of paramilitary terror, followed by a delusional climate of white racial romanticism that supplied new and different cords of memory to rejoin South and North.

Though Ava DuVernay’s film Selma depicts events of 1965, rather than those of a century earlier, the controversy surrounding its fidelity to the facts reminds us that we inevitably forget more history than we remember, even (especially?) when presuming to right the record. Though never openly acknowledged, Lincoln’s reflections seem palpable in the words and deeds of all those engaged, at Selma, in a struggle for citizenship Reverend King called “more honorable and more inspiring” than all others in American history, and that President Johnson judged equal as a testament to the resilience of democracy to the battles at Lexington, Concord—and Appomattox. The waging of such a contest required extraordinary human and organizational capacities. The march to Montgomery, ending on March 25, 1965, would doubtless have ended less triumphantly had not President Johnson nationalized 1,800 Alabama Guardsmen, deployed over 2,000 US troops and marshals, and tasked aircraft and demolition teams to sweep the road ahead, assuring security for hundreds en route. But just as certainly, that march—along with the earlier march toward Montgomery—could never have been envisioned, much less commenced, without the courage and implacable faith in rights shown by Annie Lee Cooper, Amelia Boynton, John Lewis, and others Johnson famously credited as “the real heroes of this struggle.” The sense of people making their own history, rather than conceding to it the inevitable determination of their lives, is a much-remarked achievement of DuVernay’s film, and no less significant for being so. Hollywood previously captured the civil rights movement within a self-congratulatory lens of racial paternalism; if nothing else is gained in its making, Selma establishes that African Americans can be portrayed in postbellum film as principals, rather than wards or subordinates.

Like Lincoln’s Second Inaugural, Selma is remembered for its salutary impression on later generations. Yet for those who lived through it, as for those who lived through the Civil War, the experience entailed risk, uncertainty, and bitter disappointment, as well as triumph. That, too, is well represented in the film Selma. Death haunts the saga of Selma, just as it stalked Lincoln through his grim stewardship of the war. Anguish, followed hard by suspicion and resentment, greeted news of the casualties of the later battle—Jimmie Lee Jackson, James Reeb, Viola Liuzzo, and many others elsewhere in Alabama that same year. Here, as well, DuVernay achieves a further salutary turn in portraying the movement. Blood, she poignantly shows, was spilled during the freedom struggle; people died. And those who survived wondered and worried about what would come next. 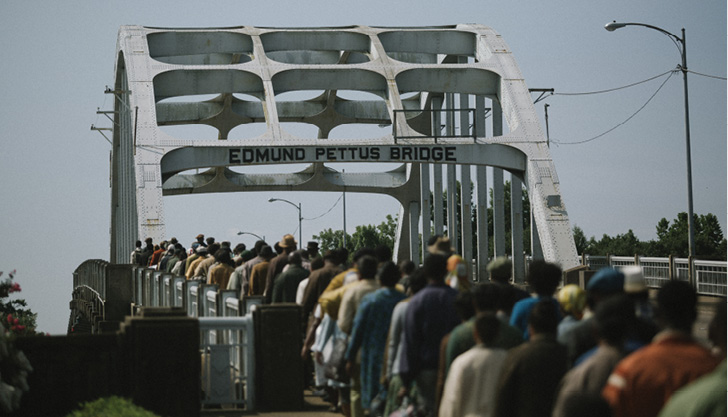 Worries and disagreements did not subside after the march into Montgomery in the spring of 1965, nor even with passage of the Voting Rights Act later that summer. Members of the Student Nonviolent Coordinating Committee, bitter at being eclipsed once again by their movement elders in the Southern Christian Leadership Conference, commenced internal disputes that led to the expulsion of white members, the end of effective cooperation with SCLC and, ultimately, rejection of nonviolence as an organizational tenet. King and Johnson’s alliance and trust, likely strongest through the winter months of 1965, would itself erode over the war in Vietnam and controversy surrounding the Moynihan Report. And all the while, ongoing massive resistance on the part of some Southern (and Northern) whites cost lives, clouded loyalties, and intrigued opportunistic politicians, accelerating a gathering backlash that would strive to discredit the integrity of the movement and reverse its tangible gains.

This, of course, is as much the world passed on to us from history as the one King and Johnson separately held up as herald of a coming American multiracial democracy. Lincoln’s caution that the road to securing such an outcome would prove painful, uncertain, and perhaps unending, seems appropriate as a reference point for regarding the honesty, as opposed to mere accuracy, of film portrayals of the history of race and nation by DuVernay and those who will follow. More broadly, it suggests an exacting yet necessary standard for rating our collective appreciation of the deeper truths of 1965—or, for that matter, of 1865.

Adam Green is an associate professor of history at the University of Chicago. He is the author of Selling the Race: Culture, Community and Black Chicago, 1940–1955 (2006) and coeditor of Time Longer Than Rope: A Century of African American Activism, 1850–1950 (2005). He is currently working on a book titled The Black Struggle for Happiness.