Interview with Donald Ritchie, Retiring Historian of the Senate

Historian of the Senate Donald Ritchie has announced that he will retire in May. Don has been with the Senate Historical Office since 1976, soon after its creation, first as associate historian and since 2009 as its historian. Long a leading figure in the American Historical Association, the National History Center, and other historical organizations, he is also the author of a dozen books about the history of Congress, the Constitution, and the press, as well as the coauthor of a number of American history textbooks. Dane Kennedy, director of the National History Center, asked him to reflect on his career and the contributions historians can make to public debates.

Tell us about your background and the circumstances that drew you to a career in history.

As an undergraduate at the City College of New York during the tumultuous 1960s, I was drawn to history as a discipline that could put the social and political currents of the era into larger context and make some sense out of them. I took several courses with Professor Fred Israel, whose methodology seminar introduced me to oral history, microfilm, and archival research. When I began looking for graduate schools, he also steered me to the University of Maryland, on the grounds of its proximity to the Library of Congress. I had intended to get a master’s degree and return to New York to teach high school, but in 1969, because of the Vietnam War, I was drafted into the US Marine Corps. Fortunately, I was stationed far from combat, at Pearl Harbor, and returned to use the GI Bill to get my doctorate. At Maryland, I came under the guidance of the political historian Horace Samuel Merrill. His “Merrill’s Rules” taught generations of historians to think and write clearly, and produced several shelves of published dissertations and other books.

You began your career working at the AHA and have been involved with the AHA (and the National History Center) for many years. What changes have you observed at the AHA and other professional organizations for historians?

Just after getting my PhD in 1975, I was hired to conduct an NEH-funded feasibility study on using computers to create a bibliographical service for all historical organizations and publications. The AHA sponsored the project, and installed me in a basement office that I shared with the person who spent months typing all of the name badges for the annual meeting. The job introduced me to the AHA at all levels, and sent me out to interview a swath of historians, editors, and directors of professional organizations. The plan, to tap into the new computer technology, was enthusiastically received by smaller associations but collapsed when it failed to interest the Organization of American Historians. Years later, when I served on the AHA Council and was a member of its committee on affiliated associations, I was pleased to help recruit the OAH as an affiliate rather than a rival organization, having learned that the history profession works better when it works together.

The year 1975 was the functional equivalent of 1929 for the history profession. The universities that had produced a glut of new doctorates had few teaching jobs to offer. But 1976 saw the national bicentennial, which encouraged the federal government to expand federal historical programs. Arthur Schlesinger Jr. had written to Senate leaders, pointing out that they were providing for the preservation of President Richard Nixon’s papers but not for their own, and urging the creation of a Senate Historical Office. Senators Mike Mansfield and Hugh Scott accepted his advice and launched the nonpartisan office, with Richard Baker as the first Senate historian. He placed an ad in Perspectives on History for an associate historian. I applied and was hired in March 1976. The only objective that the senators gave the office was to “promote the history of the Senate.” Dick and I agreed that rather than write the history of the institution, we should encourage others by making Senate records more accessible, conducting oral histories with senators and staff, providing archival assistance to senators and committees, and collecting and disseminating useful information. Over time, we began public outreach programs by sponsoring conferences, planning exhibits, and preparing brochures for the millions who visit the Capitol each year. As associate historian, I devoted 33 years almost exclusively to research, writing, and public presentations, with no administrative responsibilities. In 2009, I became the Senate historian, supervising an office of talented historians and archivists and dealing more directly with the senators. One of the highlights of the post has been participating in the freshman orientation program for new senators and addressing them, in the Old Senate Chamber of Webster, Clay, and Calhoun, on “What every senator ought to know about Senate history.” 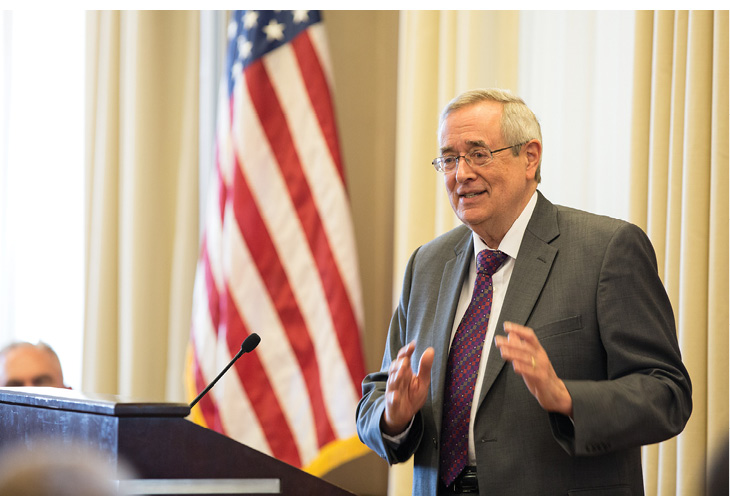 Don Ritchie addressing a recent meeting of the US Senate Youth Program’s delegates. Public outreach has been a major component of the Senate Historical Office’s mission.

What distinctive challenges confront those who work as historians for federal agencies?

Public history is sometimes viewed narrowly as historians who work for government and other nonacademic institutions, but the definition has evolved into those who provide history to public audiences. Writing for nonhistorians requires a combination of clarity, brevity, and captivation. The challenge is to provide accurate and reliable information while avoiding partisan or ideological interpretations. The information must often be collected and provided quickly for those who are facing a deadline, and it must be able to withstand criticism from those who have developed alternative views. By coincidence, all of the qualities that I have worked hard to develop as a federal historian have also assisted me as an author of several high school history textbooks—where the purpose is to open students’ minds, not make them up for them.

What has given you the greatest satisfaction as historian of the Senate?

While I have no qualms about studying and writing history for its intrinsic sake, I take particular satisfaction in providing historical information that has relevance to ongoing events, responding to questions from senators, staff, and journalists. I am always pleased to hear someone cite our information in a debate or in a news article or broadcast, placing current events into historical context. The other great pleasure my job has offered is an opportunity to sit down face-to-face with those who have experienced historical events and conduct oral histories with them. Interviewing people across the political spectrum and at every stratum of Senate operations has provided me with the best information about what really happened, often away from public view, from their unique perspectives. These interviews have been a great learning tool for me, and we have been able to share them with other researchers via the Library of Congress, the National Archives, and the Senate website (www.senate.gov).

As someone who has studied the Senate from the “inside,” how do you think it has changed over the course of your career?

The US Senate is a 226-year-old institution that not only appreciates its history but is often governed by its history and precedents. Its seemingly arcane rules and procedures have survived because they have useful purposes that might not be readily apparent, particularly to empower individual senators and to protect the rights of political minorities. The oral histories that I have conducted, rather than confirm what I expected, have more often confounded my assumptions. I learned that the Senate’s players and events were often more complex that they have been portrayed in the media. On the surface, the Senate appears to be a traditional institution that has preserved its complex rules and sense of decorum along with its snuffboxes and historic furnishings. Beneath the surface, it has undergone enormous changes in the past half century, from the expanding role of women as senators, staff, and journalists, to the adoption of the latest technology, changes in ethical standards, and, most significantly, the transformation of the political parties. When I came to the Senate in 1976, both parties were divided between liberal and conservative wings, making party-line votes unheard of and coalition-building a legislative necessity. Since then, both parties have grown more internally cohesive, exerting almost parliamentary discipline. While the rules have remained essentially unchanged, the polarization of the parties has made it exceedingly difficult to achieve the Senate’s supermajority requirements and to pass anything consequential.

How can professional historians contribute more effectively to public debates on policy issues?

I have been an enthusiastic supporter of the National History Center since its inception in large part because it offers all historians, academic, independent, and public, an opportunity to engage in public policy. The NHC’s Congressional Briefings have connected scholars with policy makers and helped to connect current events with their historical roots. The regular Washington seminars have also brought together a cross section of interested parties to examine historical issues that are relevant to contemporary debate. Historians have a lot to offer if they are willing to communicate outside of their own conferences and publications.

What advice would you offer to those who are currently contemplating careers in history?

While no one should enter the field with unrealistic expectations, and while academic employment prospects for historians have not improved significantly since the 1970s, there are now many outlets for historical expertise. Having spent a career in public history, I advise newcomers that the best public historian is the best historian, meaning that a solid grounding in historical research, writing, and interpretation applies equally to academic and public history practices. Those who enjoy what they are doing and gain from it personally should be able to handle whatever obstacles come along.

What changes have you observed at the AHA and other professional organizations of historians?

The Senate Historical Office has always encouraged its staff to be professionally active—publishing, presenting papers, and serving as officers in professional organizations. Networking benefited the historians and archivists by allowing us to keep current in our fields and also by advertising our services to others. I served on the AHA Council, as president of the Oral History Association, and as cochair of an Organization of American Historians program committee, and watched all of those organizations grow more active and open to new ideas. The AHA, the National Coalition for History, and the National History Center have made notable advancements in becoming umbrella organizations for all historians and have provided the profession with much more of a presence and a voice in public affairs. You now hear a lot less of the old responses—“We can’t possibly do that,” “We’ve always done it this way,” “We wouldn’t be interested in that”—and more willingness to be more experimental and inclusive.