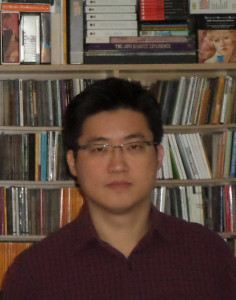 Sung Yup Kim is a PhD candidate and adjunct lecturer at Stony Brook University. He lives in Port Jefferson, New York, and has been a member since 2012.

I always had some interest in history but it was not until my mid-20s, after spending a combined six years in college and graduate school as an economics student, that I truly discovered my passion in history. It happened, out of all places, in the South Korean Army. While fulfilling my mandatory two years’ service I decided to spend what little free time I was allowed on reading history books. Initially the idea was just to broaden my horizon as an economist but once I began reading the likes of Marc Bloch, Georges Lefebvre, Eric Hobsbawm, and E. P. Thompson, there was simply no turning back. Or as some of my friends used to say, it was simply a case of the army finally making me lose my grip on reality!

I am trying to complete my dissertation on local legal practices, economic culture, and professionalized law in late colonial New York. I have just finished early drafts of my chapters on the summary jurisdiction of lay magistrates and am now writing about the far-reaching changes and tensions wrought by legal professionalization.

As I am still in graduate school, I will probably stay focused on completing and building upon my dissertation project in the near future.

I am fascinated by American alto-saxophonist Matana Roberts’ recent albums Coin Coin Chapter One: Gens de Couleur Libre and Chapter Two: Mississippi Moonchile. What makes these two albums special, aside from the music, are Roberts’ spoken and sung words. Presented in a stream-of-consciousness style that matches the music, they are based on a variety of written and oral historical sources. In one section, for example, snippets from Roberts’ interviews with her grandmother are followed by excerpts from a speech by Fannie Lou Hamer, seamlessly presenting a vivid image of life as a southern sharecropper. The overall effect is a remarkably evocative and personal rumination on the struggles of African American women under antebellum slavery and postbellum white supremacy. The music (adventurous jazz) may be an acquired taste but I think many historians would find Roberts’ approach a refreshing way of bringing collective memory to life.

I would say it is the discipline’s less overtly “professional” aspects that attract me most. While history has its share of core methodologies and canonical works, I love how much intellectual freedom and creativity we are allowed in shaping our own interests and approaches as historians. I love how we are encouraged to view human experiences from multiple angles and in their full complexity rather than focusing on a few compartmentalized commensurable aspects as our area of specialty.

The main motivation was pragmatic—to find information about grants and jobs and to receive new issues of the AHR. But I also find it important to be part of a broad professional community, especially at a time when history and other humanities seem to be under attack everywhere.

I am a longtime fan of avant-garde jazz and free improvised music. Mostly it’s just the music itself that I love but over the years I’ve also found much to admire in the musicians’ integrity and dedication. It’s inspiring to see/hear so many of these unique and accomplished musicians in different corners of the world, although far removed from mainstream recognition and commercial success, constantly pushing boundaries and striving to create meaningful art that refuses to be adulterated, labeled, or commodified.

In South Korea I met many wonderful history professors and graduate students who helped start my career as a historian. It’s a small but vibrant intellectual community they have over there, and I hope the future sees their work reach a wider audience, including in the AHA.