The “Depression Disease”: What the United States’ First National Lead Poisoning Crisis Can Teach Us about the Flint Water Disaster

In 1932, a young girl showed up at the Johns Hopkins Hospital with dire symptoms suggesting lead poisoning. A physician who went to the girl’s home to locate the source initially suspected lead paint, but couldn’t find any. When a neighbor suggested that the source could be the battery casings that families in the neighborhood were burning for fuel and warmth, the physician tested them and found that they were saturated with lead. In the months following the discovery of that first case of lead poisoning, dozens more children showed up in Baltimore and other cities’ hospitals with similar symptoms. 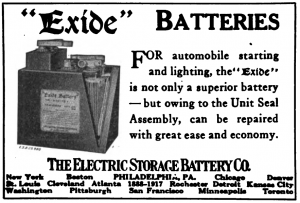 An advertisement for lead-acid batteries, which came into widespread circulation in the 1920s as automobile useincreased. Once the batteries were depleted, junk yards would recover the lead for re-smelting and discard the wood casing. Although some battery manufacturers began using hard rubber cases, many continued to use wood in the 1930s. These wood cases were soaked in lead, and burned with a foul, poisonous stench when used as fuelwood by the poor during the Great Depression. Source: Horseless Age43 (2): 82/Wikimedia Commons.

Considering past lead poisoning crises, such as the one that struck Baltimore in the 1930s, has the potential to teach us valuable lessons about how current crises in cities like Flint, Michigan, could be resolved. In particular, Baltimore’s lead poisoning epidemic during the Great Depression can teach us two things: that framing lead poisoning victims as casualties of larger economic or political forces, rather than focusing narrowly on racial disparities or immediate circumstances, makes them more likely to receive help; and that permanently replacing sources of lead as opposed to applying stopgap measures is critical to both the short- and long-term resolutions.

Within days of learning about the burgeoning epidemic in Baltimore, the City Health Department (BCHD), under commissioner Huntington Williams, took action. The BCHD found that junk dealers were recycling lead-acid batteries, and then selling the metal and discarding the wooden casings. These junk dealers were concentrated in a five by seven block neighborhood in East Baltimore, whose residents were primarily black and poor. With the onset of the Great Depression, these residents began using the discarded casings for fuel in their woodstoves—they lacked gas hookups or even clean burning liquid fuel stoves. As the Great Depression continued, demand for casings increased.

Williams soon sounded a national alarm about the epidemic—he published an article on it in 1933, and more importantly, mailed dozens of letters to commissioners, physicians, and lead industry executives around the United States drawing attention to the problem. At the local level, the BCHD disseminated information about the hazards of burning battery casings using its own publications and radio broadcasts. It also assisted local papers in covering the epidemic, and carried out door-to-door surveys that informed residents and businesses of the problem. Finally, the BCHD helped remove access to the battery casings. Williams banned selling or giving away battery casings, and after junk dealers complained about garbage dumps raising their prices on battery casings in response to the increased demand for disposal, arranged for free delivery and incineration by the city. 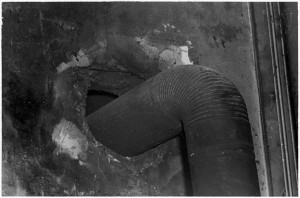 While some households switched fuel sources when they learned of the poisoning danger, many did not. One man with 400 casings in his cellar refused to give them up until another fuel was delivered. The reason is not hard to understand—reliable heating was literally a matter of life and death. Thus, the problem did not end until families were provided alternate sources of fuel, such as coal, from the Family Welfare Association, a charitable organization.

Baltimore’s 1930s epidemic is significant because it was the first to gain national attention in the United States, and because it pushed Baltimore, and ultimately the United States, into the modern era of public health approaches to child lead poisoning, which included screening with blood tests, reporting and tracking cases, and enacting policies aimed at prevention. But it is also significant for what it shows us about how to respond effectively to current problems stemming from lead pipes and lead paint in Flint and other places in the United States.

Baltimore organizations sought to replace the source of lead poisoning by not only regulating the source, but by proactively subsidizing an alternative. They banned the sale and distribution of battery casings, and even helped foot the bill for getting rid of them. Most importantly, they funded alternative fuel sources for families. Unfortunately, this was only a stopgap measure—just as the provision of bottled water to Flint residents is. Impoverished Baltimoreans got coal, but not gas hookups. The result was that lead poisoning from battery casings re-emerged during World War II, and later, not just in Baltimore, but also in Butte, Montana; Whiteville, North Carolina; and in other places. Similarly, we can expect more Flints as long as we continue using lead pipes to deliver water to people. 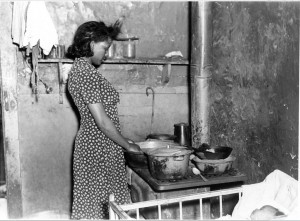 A woman cooks on a wood stove in Baltimore in the 1940s while a baby sleeps nearby. Despite the expansion of gas service in the Baltimore metropolitan area, many low-income Baltimoreans did not have access to this energy source. Some used lead-acid battery casings for fuel, especially during the Great Depression, which exposed residents in cramped quarters to lead pollution. Source: Citizens Planning and Housing Association Collection, University of Baltimore Langsdale Library Special Collections.

One of the reasons that the response to lead poisoning was effective in the short term, but not in the long term, was because of how the framing of the issue changed once the Great Depression was over. During the Depression, rather than blaming either the junk yard owners who distributed battery casings or the families that used them, government officials blamed broader economic forces for the crisis and painted the issue as one that concerned the entire nation. Williams stressed the disproportionate effects on poor blacks, but dubbed the epidemic the “Depression Disease.” The Indiana State Board of Health likewise wrote that the poisonings vividly showed “the depth to which economic conditions have driven many people,” and it argued that “lead poisoning should not be added to the grim price which many people are already paying for economic conditions over which they have no control.” This framing acknowledged social disparities in poisonings while also tying them to a broader issue in a way that cultivated solidarity with, and responsibility for, the victims.

In contrast, once the Great Depression was over, lead poisoning came to be seen as an issue that concerned only racially marginalized groups. Victims of lead poisoning—from batteries, lead paint, and other sources—remained disproportionately black and poor and their plight was seen as separate from larger, shared economic problems. As such, there was little political will to fix them in the name of the broader interest of the cities or the nation. Worse yet, some health experts, with the help of the lead industry, shifted the blame for lead poisoning onto the victims themselves.

In Flint, the negligent and potentially criminal role of government officials has mostly precluded victim-blaming. But there is danger in tying the lead poisoning problems of the city too closely with the proximate actions of Governor Snyder, the Environmental Protection Agency, and other officials. Seeing the issue of lead poisoning in Flint as being limited to the actions of a few government officials narrows both the scope of the problem and how we respond to it. It’s important to see the complications with Flint’s water supply as arising out of broader issues with deindustrialization and the failure of fractured local governance in the United States to fairly and adequately provide for its citizens.

Moreover, lead exposure in Flint is not only the result of its water supply problems—it is also the result of the lingering problem of lead paint. Indeed, many other cities have worse lead poisoning rates than Flint. The reason is lead paint, which is the most important source of lead exposure. Not only is it important to note the role of the lead industry in pushing a known health hazard, but it is critical to understand the disproportionate impact of lead paint on low-income, black people reflects our history of racist housing policies. Knowledge of past episodes of lead poisoning in the country can allow historians, as well as government officials, to situate lead poisoning and other public health problems in broader political and economic structures. Doing so is good history and good politics. 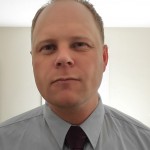 Leif Fredrickson is a PhD candidate at the University of Virginia and Mellon Fellow at the Digital Scholarship Lab at the University of Richmond. His dissertation is titled “The Age of Lead: Environmental Health, Metropolitan Change, and Urban Underdevelopment in Baltimore, 1900–2000.”