The Institute for Constitutional History is pleased to announce a summer workshop for college instructors to be held July 10–15 in Stanford, California: “The Reconstruction Amendments: Freedom, Equality, and the American Constitution.” 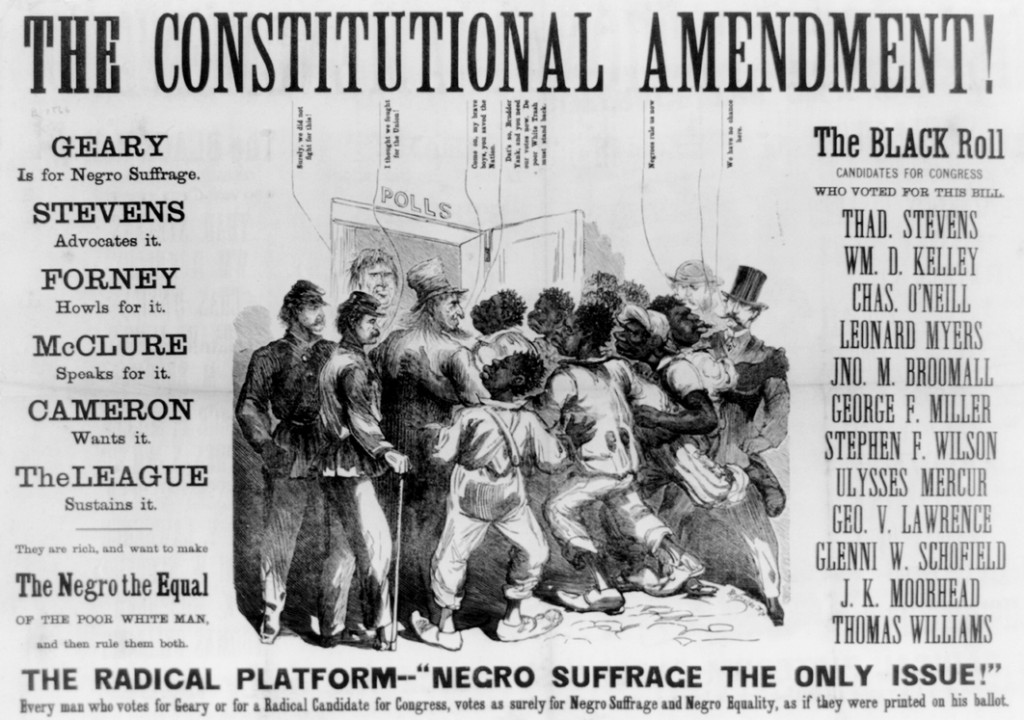 The Constitutional Amendment! A racist poster issued in 1866 by supporters of Democratic candidate Hiester Clymer as part of a smear campaign against Pennsylvania Republican gubernatorial nominee John White Geary. Credit: Library of Congress

Constitutional scholars regard the Reconstruction amendments—the 13th, 14th, and 15th—as constituting the American Republic’s third Constitution, the first being the failed Articles of Confederation (1781–89), the document of 1787 as amended by the Bill of Rights the second. Each was a constitutive moment, creating a new nation on a constitutional footing different from the preceding regime. The Reconstruction amendments potentially transformed the state-centered constitutional federal order of 1789–1861, resting as it did on slavery and dominated by slaveholding interests, into a national republic premised on universal freedom and the equality of all people. They abolished slavery, added new securities for personal liberty, and empowered the national Congress to enforce those innovations, while securing the freedom, status, dignity, and rights of the freed people. The ensuing century and a half of constitutional development saw some of those aims partially achieved, but the promise of the amendments remains unfulfilled today. Our initial focus will be on the origins and creation of the amendments, and their development through the first Reconstruction, the counterrevolutionary resistance that imposed white supremacy, and the struggles of the long civil rights movement of the 20th century to realize the promise of the amendments. But we will study the impact of the amendments on non-racial matters as well.

Workshop Leaders: James Oakes is distinguished professor of history and graduate school humanities professor at the Graduate Center of the City University of New York. His most recent books are Freedom National: The Destruction of Slavery in the United States, 1861–1865 and The Scorpion’s Sting: Antislavery and the Coming of the Civil War.

Stipends and Support: Participants will receive accommodation at the Munger Graduate Residence on the campus of Stanford Law School and a modest stipend for meals. Participants will also receive a travel reimbursement up to $250. Workshop participants are expected to attend all sessions and engage in all program activities.

To apply, please submit the following materials: a detailed résumé or curriculum vitae with contact information; syllabi from any undergraduate course(s) in constitutional studies you currently teach; a 500-word statement describing your interest in both constitutional studies and this workshop; and a letter of recommendation from your department chair or other professional reference (sent separately by e-mail or post). The application statement should address your professional background, any special perspectives or experiences you might bring to the workshop, and how the workshop will enhance your teaching in constitutional studies.

The deadline for applications is May 1, 2016. Applications should be sent via e-mail to MMarcus@nyhistory.org. Successful applicants will be notified soon thereafter.

About ICH: The Institute for Constitutional History (ICH) is the nation’s premier institute dedicated to ensuring that future generations of Americans understand the substance and historical development of the US Constitution. Located at the New-York Historical Society and the George Washington University Law School, the institute is co-sponsored by the American Historical Association, the Organization of American Historians, and the American Political Science Association. The Association of American Law Schools is a cooperating entity. ICH prepares junior scholars and college instructors to convey to their readers and students the important role the Constitution has played in shaping American society. ICH also provides a national forum for the preparation and dissemination of humanistic, interdisciplinary scholarship on American constitutional history.