In light of President Obama’s historic visit to Cuba (he is the first sitting US president to visit the country in 88 years), AHA Today would like to bring the rich and varied historical scholarship on Cuba to a wide audience. Here are five aspects of contemporary US-Cuban relations that have a deep history, along with links to further reading. 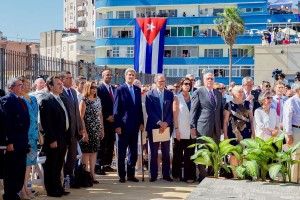 US secretary of state John Kerry (center left) stands for the Cuban national anthem at the recently reopened US embassy in Havana, Cuba (August 14, 2015). Wikimedia Commons

US industry has a long history of doing business in Cuba. As US corporations seek to re-enter the Cuban economy after decades of trade embargo, historians remind us of past business endeavors there. As Thomas F. O’Brien points out in this American Historical Review essay on General Electric operations on the island, “US investment in Cuba soared to over $1 billion in the early 1920s, and American corporations captured effective control of Cuba’s sugar, mining, and transportation industries[.]” Putting trade relations in this historical context is crucial for President Obama as he begins efforts to open trade anew.

The prison at Guantánamo Bay has a contested history and legal status. The United States first occupied Guantánamo Bay in 1898. The Platt Amendment, written into Cuba’s new constitution in 1901, allowed the United States to lease naval stations in the country, which by 1903 included the one at Guantánamo Bay. In “Where is Guantánamo?” Amy Kaplan argues that the base’s contested legal status is part of a history of US imperial actions. Obama often refers to Gitmo as a recruiting tool for Al-Qaeda. But Cubans, too, have opinions on its presence and the torture that occurred there.

A significant number of Cubans identify as Afro-Cuban and claim African heritage and black identity. As the United States’ first black president visits Cuba, the history of slavery and the relationship between Afro-Cubans and African Americans come to many historians’ minds. Frank Andre Guridy, in Forging Diaspora: Afro-Cubans and African Americans in a World of Empire and Jim Crow (2010), shows that relations between the two groups led to both identifying as part of a “transcultural African diaspora.” Rebecca Scott, in Degrees of Freedom: Louisiana and Cuba after Slavery (2005), provides a comparative analysis of how emancipation and freedom shaped both societies. It’s worth considering similarities and differences between the two countries’ legacies of inequality and the strategies each has used to ameliorate those legacies.

Cubans form one of the largest immigrant communities in the United States. While historically many Cubans have been admitted to the United States under “special humanitarian provisions of US law instead of traditional immigrant pathways,” it is unclear how the evolving relations between the two countries will impact Cuban migration to the United States. In this essay, Julio Capó Jr. looks at the 1980 Mariel boat lift, which brought more than 100,000 Cuban refugees into the United States. Capó pays special attention to queer Cuban refugees to argue that “the United States drastically shifted its long-standing antihomosexual stance on immigration and citizenship to reconcile its position as a refuge for those fleeing Cuban Communism.” Facing criticism for his visit from some Cuban Americans, Obama will need to consider their varied stance on migration from the island, as well as implications for US immigration policy.

The popularity of baseball in Cuba predates US intervention in the 19th century. Since then, as Louis A. Pérez Jr. shows, baseball—“the quintessential American game”—has served as both an affirmation of the Cuban nation and a vindication of the Cuban revolution. As Pérez writes, “baseball has long served to give expression to Cuban nationality, both as a means to nationhood and as a metaphor for nation.” This significance of the game to Cuban nationalism and identity should give Obama plenty of food for thought as he takes in a game between the Tampa Bay Rays and the Cuban national team.

Having trouble accessing linked articles in this story? Become an AHA member now to gain access to the American Historical Review and a 50 percent discount on JPASS.